Programming note:  I am now using the incredibly accessible box.net for file hosting.  If you haven't been downloading the MP3s I put up here because ZShare made you jump through all kinds of hoops, please give the new setup a try.   Moving on ...

This week in ... Aaron and Ilana Go To Concerts!

A great, great show.  British girl pop is really a gift.  And a sweet poster to go with it! 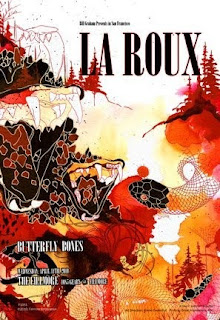 A few things to talk about:

(1)  I am, as you may know, a really tall guy.  Ilana is a more normal size.  So, when we go to concerts, sight lines become an issue.  I'm always blocking someone's view, and Ilana is always stuck behind someone else.  Subconsciously, I've developed a kind of algorithm for this based on how much I like the band in question.  Examples:

When we saw AFI earlier this year, the majority of the people in that audience absolutely worshiped at the altar of Davey Havok.  Personally, I think AFI is great, but really the band doesn't affect my life on a day to day basis.  I couldn't stand in front of any of those people.  We hung out near the back.

When we saw the Hold Steady last year ... I was front and center.  I was standing in the way of a lot of people.  I do not care.  You do not love the Hold Steady as much as I do.  You can stand behind me.  This is our implied social contract.

So, for La Roux ... I like La Roux.  I think I like La Roux roughly as much as everyone else at the Fillmore.  I'm not really sure if La Roux has hardcore fans.  Maybe.

So we stood off to the left, about halfway up in the crowd.  Thought it was a pretty good spot.

Now ... if you want me to move, and you ask nicely ... I will.  Happily.  If you want me to move, and you're a dick about it ... I will still move, but I will sulk a little bit afterward.  However, if you really want me to move, I suggest you do what the guy behind me did, which is to drunkenly throw one arm around my neck, put your other hand on my hip, then sloppily ask me to move, and when I say "okay, yeah, whatever" keep talking about how it must be great to be tall, and how I probably have so many advantages in life, and how you know it's not that much of a problem for me to move, and basically grope me the entire time ... well, not only will I move I will move to pretty much literally the exact opposite part of the auditorium.  And, you will be able to see.  At least I hope so, weird guy.

(2)  Really enjoyed La Roux's cover of "Under My Thumb," which got me thinking about the great Beatles vs. Stones debate.  I don't really have an opinion one way or the other.  Don't you think I should?  I mean, I have a music blog and everything.  I may devote a couple days of doc review to listening to the complete Beatles and Stones catalogs (well, the Stones catalog through roughly Some Girls) and try to reach some kind of definitive conclusion.  So, I guess, stay tuned for that.

(3)  I haven't made a tenuous sports/music analogy for awhile, so let's try this one.  When I first heard of La Roux, I wasn't really all that impressed.  I wasn't thrilled with either of her first two singles ("In for the Kill" or "Quicksand").  But then I heard "Armour Love," and "I'm Not Your Toy," and "Bulletproof."  Oh man ... "Bulletproof."  Why were you not the first single?  You are so awesome.  And now, if you slot in the first two singles after those three ... well that's a pretty solid album.  Now it looks a lot better.

And, in the same way, Nick Blackburn pitched the second game of the Twins season.  Carl Pavano pitched the third.  Now, Blackbun is a horrible #2 starter.  Pavano isn't much of a #3.  Yet I still believe the Twins will have an above-average rotation this year, and that is because I expect big things from #4 starter Kevin Slowey and #5 starter Francisco Liriano.  I think if you set the rotation with Liriano at #2 and Slowey at #3 ... well now Blackburn and Pavano look pretty good there in the back.*  It's all about presentation.

*Discussion question:  Do you think being compared to La Roux's "Bulletproof" is now the high point of Francisco Liriano's career?  I say yes.

Saturday, April 17 - Yeasayer and Sleigh Bells at the Fillmore

And another great poster: 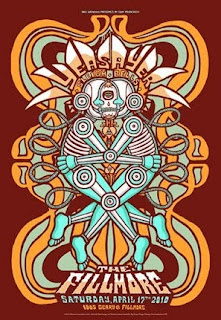 I fully understand that, in a year, maybe even in six months, Sleigh Bells will no longer be relevant.  I understand how the blog hype cycle works, I understand that the band's distortion-pop sound is a little bit of a gimmick, I understand that signing to MIA's label may only pigeonhole them further, but ... I love "Crown on the Ground" so much.  I really do.  Listening to that song on headphones ... the rest of the world just melts away.  Of all the recent shows Ilana and I have been to, I think I was most excited for this one.

And really, it was a little bit of a disappointment.  This is a theme we'll re-visit in discussing the epic weirdness of the jj show, but ... there are two people in Sleigh Bells, and one of them just sings.  A Sleigh Bells song, meanwhile, is a dense collection of sounds, just a wall of noise.  It's always interesting to see how bands in this situation attempt this seeming impossibility of recreating that sound onstage.  Some tour with backing musicians.  Others (White Stripes, Japandroids, even Mates of State) seem to be able to pull it off with just two people.

Sleigh Bells, though, didn't really even try.  The girl sang.  The guy played guitar.  All the other sound (which included multiple guitar and vocal parts) came from a backing track.  And that never really sits right with me.  On the one hand, I understand that the band created that backing track, and that I am still (in a literal sense) listening to them play (just not, y'know, right now).  On the other hand, it's like they're touring WITH their songs, like "Here's this music we made.  Now we're going to stand in front of it and perform 15% of it live."

I was also a little disappointed (though not incredibly surprised) that they stuck with their noisy catalog the entire time, and didn't break it down for "Ring Ring," a nice departure for the band that finds them splitting the difference between Bob Dylan's "The Man In Me" and Funkadelic's "Can You Get to That?"

The headliners, blog-rock heroes Yeasayer, didn't fare too much better, one day after receiving a ton of critical praise for their show at Coachella.  Though they had the crowd on their side from the beginning by claiming to prefer The Fillmore to the Polo Field in Indio,* the band fought with muddy sound throughout.  Album standout "O.N.E." was a concert standout as well, but it only highlighted the lack of energy at the show.  As Ilana put it, "How is it possible for that one song to be so much better than, well, everything else they do?"

*Singer:  "That place was wack.  Paris Hilton was there."
Bass Player:  "Hey, why you gotta be so hard on her, man?  She's trying to get her life back together."

In the end, a mostly satisfying, yet also exhausting, concert week.

Official Site
Hype Machine
(Note:  Sleigh Bells' debut album, Treats, will be out May 11, but I can't figure out where you could pre-order it.  So ... I guess check for it next month.)

Posted by Aaron Bergstrom at 4:57 PM