May 8 - Drive By Truckers - The Fillmore 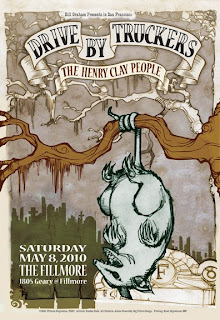 No Ilana on this one.  Three concerts in three nights was just too much for her.  Also, she's not that crazy about Drive By Truckers.  And she is really not a fan of this poster.  So it goes.

On a happier note, some people DID go to the show.  Kass, for instance.  And Meg.  And Eric.  The last two are gen-u-ine Southerners.  They used to watch DBT frontman Patterson Hood play in coffee shops (Meg:  "We actually asked him to play at our wedding.  He was kind of a jerk about it.")

Thoughts on the show:

(1)  I don't know how this is possible, but the Fillmore seemed FAR more crowded than usual.  The show was a sellout, but a large majority of Fillmore shows are sellouts.  Am I missing something here?  Do DBT fans take up more space than normal people?*  We were smashed up against the sound board in back, and still barely had room to breathe.

*This is actually a distinct possibility.

(2)  Though Patterson Hood is often seen as the face of the band, DBT also performs a sizable percentage of songs written and sung by guitarist Mike Cooley.  As the show progressed, half of our group (Kass and Meg) became strongly anti-Cooley, which is somewhat odd, since Kass' favorite DBT song ("Self-Destructive Zones") is a Cooley song.  Meg's anger seemed to somehow tie into former band member Jason Isbell's contoversial departure from the band, but I don't have all the facts on that one.*

(4)  Then there was an extended pre-encore break, where it started to look like the band might not come back at all.

(5)  Then there was an incredibly long, five or six song encore, which included two extended storytelling-into-a-songs ("Let There Be Rock" and "Eighteen Wheels of Love").  This was the longest show I'd been to since the last time I saw Phish (which may as well have been a different lifetime).

(6)  These guys can put away some booze.  A handle of Jack Daniels' was at someone's lips at virtually all times.  As the set wore on, and became more ragged, and more confused* ... it got better.  No question.  (Eric:  "Now this is the band I know.  If Cooley falls off the stage, it'll be like we never left.")


*The breaks between songs became comically extended, as if it took a herculean effort just to get everyone in the band playing the same song.

(7)  The band played maybe three of my twenty-five favorite DBT songs ... and yet I still had a great time.  I don't know how to compliment a band any better than that.  They played the only song I would have been legitimately disappointed to have missed ("Let There Be Rock") and a handful of jams that never really stuck out on the albums.  The show left me wanting to go listen to more Drive By Truckers.  So that's good.

After the two songs we've already discussed here ("This Fucking Job" and "Birthday Boy"), "Santa Fe" is the best song on the Truckers' hit and miss The Big To-Do.  And it's a Hood song, so Kass and Meg can breathe easy.  I've spent enough words on these guys in the past.  Let's just move on.  I have a lot of concert reviews to get to.