I still haven’t come to terms with my college experience. Honestly, I don’t expect to anytime soon. I know I sound bitter when I talk about it, and probably I am, a little bit, but that’s not the whole story. When it was good, it was good, but when I was gone, I was glad. Maybe someday I’ll find the words. In the interim, this song is absolutely the most accurate description of college I’ve ever heard. So let’s just use this as a placeholder. You don’t ever have to visit St. Cloud, Minnesota. I don’t ever have to talk about it. It felt like this.

You lived in a place long, long ago
Where nothing moved and time went slow
And someone sang about a Golden Age
In Cenetaph Park, drinking in the dark
This place was the machine that put the iron in your heart


So we hung around and we hung around
and we hung around for days
In the parking lot stoned, stars shone out of phase
And the rain came down, cassettes wore out, Oh No!
Then you left town feeling pretty down
With your headphones and your coat and
your dirty graduation gown you were
In the bedroom singing radio songs
Sing them loud
Sing them all night, Emily
You need something to help you along
Freeze, freeze, freeze Little Golden Age


I don’t miss my Little Golden Age
‘Cause the body takes the heart, takes the heart
around from place to place
And this place still stands, this place remains unchanged
And you can’t go back
Oh, who would want to anyway


You were in the bedroom singing radio songs
Sing them loud
Sing them all night, Emily
You needed something to help you along
My Little Golden Age

19) Someone Still Loves You Boris Yeltsin - "Sink/Let It Sway"

Here’s my story about Someone Still Loves You Boris Yeltsin. Somewhere around 2004, maybe 2005, I stumbled across a few decent MP3s from these guys, right about the same time they were selling their debut album and this awesome t-shirt: 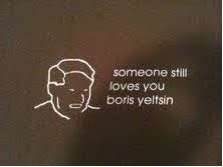 as a package deal for something like $10, maybe $12. So I bought it. And the CD, sadly, turned out to be pretty boring. So did their follow-up record a couple years later. But I kept wearing the shirt because, well … look at it. It cannot be denied. So I had to tell people, “Yeah, it’s a band … they’re actually not that great, but I really love the shirt.”

Invested as I was, it was quite a pleasant surprise when, out of nowhere, Someone Still Loves You Boris Yeltsin released one of my five favorite albums of 2010, Let It Sway. I mean, I already had the shirt. Now I can drop the disclaimer. “Oh, this? Yeah, they’re a band. They’re really good.”


Robyn - Hang With Me official video from Robyn on Vimeo.

Pay no attention to the lyrics. That chorus is absolutely the soundtrack to falling recklessly, headlessly in love with someone.

Robyn - "Hang With Me (Acoustic)"
Robyn - "Get Myself Together"

Then I listened to it twenty-one times on Monday. Then I literally listened to it on repeat for over an hour. I live inside this song now. There’s no other way to say it. It has become my home.

It’s my favorite yearly tradition, that one song that comes out after my Top 100 list is all but finished, that one song that demands inclusion. “Dinosaur on the Ark” by The Very Best in 2008. “Ambling Alp” by Yeasayer in 2009. And now Iron & Wine. Let’s just contemplate the lyrics while we listen to this song ten or twelve more times in a row.


I saw flowers on a hillside
And a millionaire pissing on the lawn
Saw a prisoner take a pistol
And say “join me in song, join me song”


I saw loaded linen tables
And a motherless colt then it was gone
I saw hungry brothers waiting
With the radio on, radio on

In which you came all the way from Wales and no one showed up.


In which we soundtrack the King of Beers.

This is, I’m pretty sure, seven Los Campesinos! songs in three years of Top 100 lists. By now, you all know how I feel about them. I will absolutely defend this band to the death. I think they have unlimited potential. If I had to pick which of my favorite bands was most likely to do something perfectly unprecedented and original, I would pick Los Campesinos! Nothing left to do but sit back and wait for them to actually do it.

Posted by Aaron Bergstrom at 8:30 AM