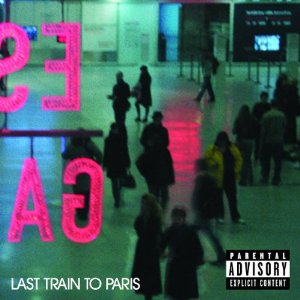 Now here's the tricky one.  As I mentioned on Facebook a couple weeks ago, the fact that Last Train to Paris has multiple great songs on it is, potentially, the most surprising development in the history of American popular music.  I was definitely not checking for this album when I put my 100 Songs for 2010 list together in early December.  There may have been an advance copy of this floating around at the time.  I don't know.  I first heard about it December 21, via text message from my sister.  I try to get all my hip hop news from elementary school teachers living in suburban Minnesota.

Officially, though, the album was released December 14, 2010.  So I'm making the executive decision that, since it came out after 100 Songs for 2010, it's eligible for 100 Songs for 2011.  Please let me know if you feel like this compromises the values and overall philosophy of the 100 Songs project.  My feeling is that none of you will care.

"Ass on the Floor" is, without question, my favorite hip hop song of the young 2011 year.  It has a depth to it, a nuance that I very rarely hear in hip hop (I admit this could be because I listen to about 50 hip hop songs a year, but whatever).  I'm currently working on a long Jesus Music essay right now which features extended digressions on Bright Eyes, MTV's The Real World, David Foster Wallace's The Pale King ... and "Ass on the Floor."  Just let that sink in.  I have a lot to say about this song.

"Coming Home" is  much easier to explain, largely because it's exactly the same song as "Live Your Life."  I have no problem with this.  Honestly, I like "Coming Home" more.  In fact, I would like to institute a tradition where we assign the "Live Your Life" chord progression to a different rapper every year and just see what they come up with.  I bet it would be interesting for at least four or five more years.

Posted by Aaron Bergstrom at 12:49 PM