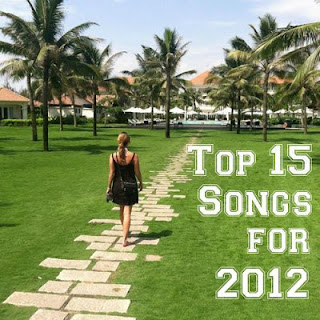 
It's Guest List Week!  You've seen my Top 100, but I'm just one guy with a blog (read by literally dozens of people!) and a disproportionate love of Swedish pop music.  What did the rest of the world listen to and love in 2012?  Well, who better to start with than everyone's favorite honeymoon blogger, my wonderful wife Ilana!  Take it away, Seahorse ...


(1) Taylor Swift – “We Are Never Ever Getting Back Together”

Despite the fact that I’m not an angsty teenage girl getting over a bad break-up, this is my favorite song of the year. I loved it from the first time I listened to it, played it on repeat for an embarrassingly large number of times in a row, and think that the music video is brilliant. As if I wasn’t convinced enough already, this song reinforced my unyielding desire to be reincarnated as a Swedish pop songwriter.

When I first heard the song, I thought that Carly Rae Jepsen was a preteen pop star from Canada like Robin Sparkles. When I found out that Ms. Jepsen is actually only one year younger than I am, I must admit that it made me like the song much less, but it was still so damn catchy. I also think the reason why Aaron and I aren’t as sick of it as most of our friends is because we were out of the country for most of May.

(3) Japandroids – “The House that Heaven Built”

I truly don’t like this band. I’ve seen them in concert twice, and both times I couldn’t wait for the show to be over. So how did the Japandroids nearly top my list? Because this song is awesome. I have no clue how they pulled it off, but this could easily be the best song of the year… except for the fact that I think their other songs are garbage.

Even though a misused apostrophe would normally disqualify any band from my top 15 songs list, this track just makes me incredibly happy. I liked it even more when they played it before one of the NLCS games at AT&T Park.

Lead singer Brian Fallon looks like Cody Smith if he was from New Jersey and had tattoos everywhere, and this song is great. It’s even better live. We went to two Gaslight Anthem concerts this year alone and both were wonderful.

All I have to say is that this song should be in TV commercials for every teen show on the CW. (I’m considering that to be a massive compliment.)

Woofs! This is one of the only songs that I’ve ever heard before Aaron did. Bonus points that the band is from Iceland and that my brother says that they’re all very tall and nice.

Here’s another song that I listened to on repeat for waaaay too many times after I heard it for the first time.

UNH! Although this song took awhile for me to warm up to it, I quickly learned to love it. It appeals to both Aaron’s fondness for female British pop and my love of dancing in cars while sitting in traffic. (Also, the radio version is way better because it doesn’t have Astro’s annoying rap midway through the song. The kid is 16 years old, but he ain’t no Lil’ Bow Wow, that’s for sure.)

I’m just glad that the Scissor Sisters appreciate SLO as much as I do. This song makes me feel like I’m on a vacation.

A.K.A. The “Holy Pup” Song. I don’t love the slow part in the middle of the song, but the rest is great. Next time Foxy Shazam comes to your city, you need to see them play live. Yes, NEEEEEEED.

When we saw fun. in concert a few months ago, I think that I was the only person there who didn’t know all of the words to this song. It was like being at a campfire sing-a-long without knowing any of the lyrics. Despite the awful auto-tune portion at the end of the song, it’s still really catchy and, well, fun. (Booooooooo!)

Aaron and I wanted Ellie to play at our wedding… and then Prince William and Kate Middleton beat us to it. Those sneaky Brits! The Duchess and I have so much in common… probably.

For some reason I thought that this band was from San Jose, so that made me like this song a lot. Always good to support the local guys, right? Well, when I found out that they’re actually from Las Vegas, I decided that I could still like the song anyway.

** Remember, these are my top 15 songs of 2012, not my top 15 songs of December 17, 2012. I’ve now heard these particular songs far too many times to really love them the way that I did when I first heard them, and chances are that you think they’re overplayed, too.

Check back for a new guest list every day this week!
Posted by Aaron Bergstrom at 7:20 AM