My 100 Songs for 2017 list comes out December 11! It’s … coming along nicely, I think. Regardless, between now and then, we’re shining the spotlight on some deserving songs that didn’t make the cut.

If it's Thursday, it must time to abandon the pretext of grouping these songs into theme posts. We're just talking about the Final Cuts now. Today and tomorrow are emotional because, once I include a song in one of these Outtakes posts, I can't have a last-minute change of heart and sneak it back onto the list. This is goodbye, Final Cuts.


DREAMCAR - "All of the Dead Girls"

DREAMCAR is Davey from AFI with all of the non-Gwen members of No Doubt, and they sound exactly like you're imagining they do. Which is to say, not as good as either AFI or No Doubt, but still pretty good.

YUNGBLUD - "I Love You, Will You Marry Me"

I have a soft spot for obnoxious British teenagers that I absolutely do not have for Americans. I mean, look at this guy: 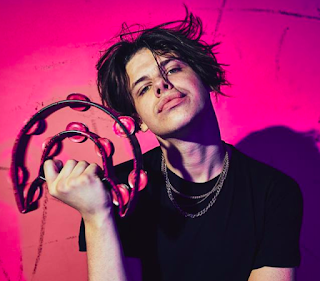 Since that Bon Iver song about the Ace came out last year, this is the best song of 2017 about a hotel I stayed at in 2017. I do not expect anyone to win this award in 2018, but I'm willing to be surprised.

Ratboys - "Elvis is in the Freezer"

This is a song about a dead cat. It destroys me. I'm just warning you now. It's really good, and I appreciate it, but it's never going to make 100 Songs for 2017 because I do not enjoy listening to it. Even though it's really good.

(If it were about a dog, it wouldn't even make the Outtakes. I would take active steps to avoid any contact with it.)

I feel like I need to disclose this because there are absolutely songs about dead humans on 100 Songs for 2017, and apparently that doesn't bother me. I might be a sociopath.

As Matthew Perpetua pointed out on Fluxblog, the chopped vocal section sounds like she's saying "I want a kitty cat, I want a kitten," and once you've had that thought, it's hard to take the rest of the song seriously.

Grouping these two together as standard-bearers (along with Spoon) in the category of "bands I really should love but just don't." I have many friends with great taste who love both of them. They constantly show up in the "Recommended If You Like" listings for other favorites of mine. And yet ... neither one really hits for me. I like them. But somehow that doesn't seem like enough.

Every time I check in on the UK music scene (which, let's be honest, I pretty much just mean NME or Radio One), there is always one of these electro house tracks near the top of the charts, and it's a fun novelty because this would never sell in the US. And I wonder, if I lived over there, if I would immediately get sick of songs like this, and I wonder if I just like this because I have no frame of reference for it. I guess what I'm saying is that I probably have to move to London to put this to rest once and for all.

It's a remix, with a proper 2017 release, so it's eligible, but this is just a 2016 song for me. There really isn't enough new material here for me to reconsider it (sorry Chance).

Two of my favorite things in the world are (a) Cam rapping over super-cheesy samples, and (b) "A Thousand Miles" by Vanessa Carlton. But, it turns out my love of both of those things does have limits.
Posted by Aaron Bergstrom at 8:25 AM