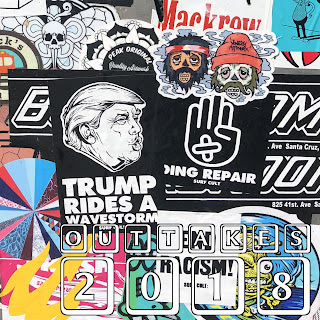 Green Day’s American Idiot came out on September 20, 2004, an unambiguous political manifesto from one of the biggest bands in the world. It hit #1 in nineteen countries, and eventually sold sixteen million copies (back when “sold” and “copies” were words that had meaning). It won the Grammy for Best Rock Album. It launched a Broadway musical.

And less than two months later, George W. Bush was re-elected. We’re still fighting his wars almost twenty years later. It’s unlikely that Donald Trump will get anywhere near Bush's body count, though he does seem to be trying.

We’ve all decided that W. is a good guy now because he gave Michelle Obama a cough drop or whatever.

So who won, Green Day (and pretty much every other celebrity from the 2000-2008 time frame) or Bush?

It’s natural to view art through the lens of its particular political moment but, how can you do that objectively and not come to the conclusion that art is pretty much useless?

I bring this up because 2018 was a great year for music, and a terrible year for … honestly just about everything else.

And, as we approach year-end retrospective season, I think a lot of very smart people are going to attempt to square that circle, either by championing artists who serve as the public face of the #resistance or by lionizing music’s power as a response to adversity, as if somehow great music is the one redeeming byproduct of our current hellworld.

But I don’t know, you guys … I just don’t think it works that way.

Kacey Musgraves released a brilliant album back in March, and nine months later we still have hundreds of kids locked in cages at the border.

Janelle Monae finally perfected her futuristic utopian vision, and it has had no impact at all on the rate at which the polar ice caps are melting.

Robyn made her triumphant return from eight years in the extended-dance-remix wilderness, and the very next day a Nazi in Pittsburgh killed eleven people.

Well, yeah … what did you expect?

I've been obsessing more in 2018. My productive obsession is music. My destructive obsession is current events.
I need there to be a connection between those two sentences. As the world burns down around us, as the oceans rapidly acidify and slowly boil ... what is music supposed to do?

My 100 Songs for 2018 list comes out next Monday, and I've written thousands of words attempting to answer that question. Get ready. For now, though, we're still safely in Outtakes territory.

Artists are still making albums in 2018, and that surprises me, but it’s a pleasant surprise. We're taking some liberties with the word “album” (there are albums included here that are five, six, and seven songs long), but I like that. I'm glad artists are free to make the records they want to make, not come up with something that a major label could sell at the mall for $18.99 on CD.

Here are my twenty favorite albums of the year, represented by a great song from each that didn't make the cut for 100 Songs for 2018. If you like what you hear, I strongly encourage you to dig deeper.

Posted by Aaron Bergstrom at 8:53 AM