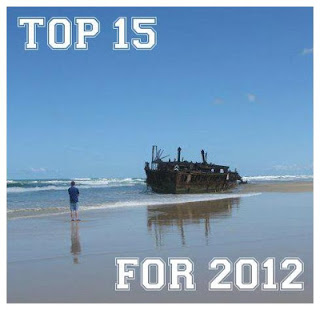 [Guest List Week continues with my concert-going buddy and former co-worker Gene, a man who may have out-obscure-Swede-ed me with this Speedmarket Avenue song.]

These guys have been around forever, but I came to them only recently, after Brent Knopf left to start his compellingly oddball spin-off Ramona Falls. This year, I fell in love with this gloomy anthem, which plods along for a couple minutes before building to a stunning full-band crescendo of angsty moping. A great winter song.

One of my all-time favorite popsters had a bit of an off year, putting out a B-minusy album and not seeming to give much of a shit about it on tour. (Maybe I caught him on an off night.) "Keep Me," the best song off What Kind of World, is a reminder of how fucking good he is when he's focused on churning out flawless two-and-a-half-minute gems.

Saw Tilly with Aaron at Great American Music Hall last month, and we were both surprised at the 2/3-empty room that greeted the tap-dancing stalwarts. They gamely showed the small crowd a good time, though the uneven new songs brought the vibe down a little ("Love Riot" is just a mistake all-around); "Heavy Mood" is probably my favorite of that bunch, a goofy, pulsating dance-rock number that's a ton of fun live (HUH!).

I started listening to Grandaddy in preparation for Outside Lands this year, and I really dig them; Lytle's solo album is indistinguishable from his Grandaddy stuff, and consistently good, with this bizarro sing-a-long the highlight.

Can't think of a more welcome musical turn-of-events recently than Gossip's turn toward full-on 80s-style electropop. Joyful Noise is one of my two or three favorite albums of the year even though nearly every song is theoretically "the same," with Beth Ditto's incredible (but totally un-show-offy) vocals laying an ace upbeat melody over her band's meticulous, propulsive beats. Had trouble choosing between this and "Get a Job" for the list.

10. Saturday Looks Good to Me - "Sunglasses"

Fred Thomas is a stone-cold genius who all too rarely uses his powers for good. A new album is allegedly on the way in the spring; meanwhile, "Sunglasses" brought me back to when I first discovered these guys and listened to Lift Me Up on repeat for a good three months. Irresistible.

This song is here almost entirely on the strength of that "Dee-da-daa-da-dum" chorus, which is my favorite thing at the moment, but more generally, you should check out these talented, perenially under-the-radar indie-rockers from Maine.

"Life's a Beach" is great too, but I just adore the precise harmonies over the super-simple guitar riff here, perfect shutting your office door and having a quick dance party. Probably the most deserving mainstream break-out of 2012 (bite me, fun.).

A little confused about why this stunning, off-kilter, piano-driven number didn't get more play, since it makes both Gotye and Passion Pit instantly irrelevant.

The worst song to be caught singing under your breath. Not totally sure what the difference is between Marina and La Roux, but almost every song on Electra Heart is ridiculously catchy, and "Sex Yeah" is the catchiest (and the most hilarously political!).

5. AC Newman - "They Should Have Shut Down the Streets"

I'm more of a movie guy than a music guy overall, but no artist has meant more to me in my adult life than Carl Newman: I became interested in music thanks to The New Pornographers (more particularly, after hearing "The Laws Have Changed"); have seen the NPs or Newman solo over twenty times; have gotten through countless finals and all-nighters and other tough times with his songs in my ears. After six albums of mostly inscrutable nonsense (but what nonsense!) it's kind of heartbreaking to suddenly hear a song this direct and straightforward. And gorgeous, natch.

Don't have much to say about this one other than that it's just amazingly pretty -- a dead-on, straight-ahead, once-in-a-lifetime melody. And I don't even really care about this band otherwise.

3. Bruce Springsteen - "We Take Care of Our Own"

Amazed to hear this used at Obama rallies; either someone in the campaign misplaced his sense of irony, or was convinced that we've all misplaced ours. You almost don't even need to parse the lyrics to tell that this is no sort of rah-rah-America number -- Springsteen's vocals are pleading, questioning, mournful even as the violins soar and the hand-claps and foot-stomps try to get people out of their seats. This is brilliant songwriting.

These guys have never made it out of the Swedish pop ghetto stateside, which is a shame, 'cause they could find a hook deaf, blind, and muzzled. This is the opener to their new album, the short and very good Goodbye, and I listened to and sang it for a month non-stop.

My personal big discovery of 2012. Based on prior experience, I had written off Metric as I-get-why-people-like-this-but-it's-not-for-me, and then proceeded to be completely blown away by Synthetica, and in particular by this staggering closer, which contains two of my favorite minutes in all of pop music, period. (It's the last two.) Seeing them live is now very high on my bucket list.
Posted by Aaron Bergstrom at 8:35 AM