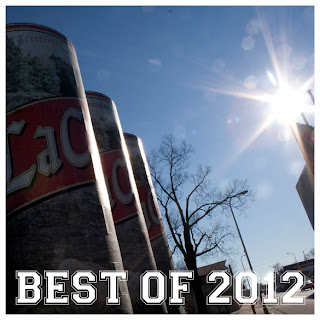 
[Guest List Week continues with my oldest friend in the world, Mr. Curt Trnka.  A former columnist for the La Crosse Tribune (who wasn't afraid to tackle the Big Issues) Curt has since taken his equally-formidable graphic design talents elsewhere.

In today's episode of Guest List Week, Curt runs down his favorites from 2012, then tosses in a gem from 2003 for good measure.  This is how you know Curt has the true heart of a music blogger - it obviously bothers him that maybe someone out there hasn't heard "Grace" by Supergrass.  This is how I feel all the time.  (And he's right - the song is awesome.)]

Take your pick on which song is your favorite uptempo or slow, but this is what he does best in my opinion. Songs that pair his "Life leaves me so wanting" voice with great female singers are usually among his best.

Neon Trees – "Moving in the Dark"

Not a great album, but an awesome song to run to. It's almost as though the song were built for little bursts of speed.

"Chapel Song" is the better of the two, but I'm unsure if it's technically from 2012, so enter the single of "Headlong Into the Abyss." Great music either way.

I assume they aren't on your year end list because you are punishing me for taking away your likes on Facebook. Fine. Be that way. These songs are still worth a few plays.

They remind me of a Band of Horses on this song. I'm likely losing my mind, but still, you should listen to this just to check.

Not a single song of his made the list? Hmmm... Did I miss something? Is this album actually bad and only my ears like it? "Smoke and Mirrors" wasn't overplayed in the Midwest, so I still enjoy it quite a bit.

Linkin Park – "Burn it Down"

You either don't like this band or you keep getting tricked into thinking, "This album will be like their first two!" Fooled again.

Pretty much the exact same feeling that Linkin Park gives me.

Lee Fields & The Expressions – "Wish You Were Here"

Soulful. Sharp. Powerful. Just plain good. I was thrilled "Home by Five" was on the list, and this reminds me of that awesome song.

Did I miss these on a contenders list? I have "God Help This Divorce" but not these. I enjoyed the piano on these two.

Heartless Bastards – "Got to Have Rock and Roll"

A Fine Frenzy – "Now Is the Start"

If this song isn't up your alley, I have no idea what is.

The Features – "How it Starts"

Hated this song to start. How it grew on me is unknown, but it's sleep lyrics live in my head now.

A guy covering a Patsy Cline song like this is something I hadn't come across before. Never fun juxtaposition.

The Rolling Stones – "Doom and Gloom"

Curt Trnka = homer. I like this song. I'm not sure I should, but I can't shake it. The lyrics are a bit weak, but that sound… Damn, I love the Stones.

Here's my Man Card. I clearly won't be needing it anymore.

This song came on and I actually stopped working on my homework to go find out all I could about the song and band. Love this sound and emotion.

In my quest to get 50 songs on this list, Zulu Winter is making it onto the list. Not sure it needs to be here, but since I already wrote this, I'm not removing it.

If a song could be a black & tan, this would be it. Tonally, it shifts back and forth between light and dark. The heavy bass with the hand claps with the airy female singer ... great mix.

The only pseudo duet I can think of that I'd label as a fantastic slow burn.

Ernest Ellis – "Want For Anything"

I hear this on "Suits" and had to go buy it. But it wasn't available. Needless to say, I was pissed and started a quest to track it down.

After telling my parents that I was going to leave the Tribune, I drove to tell my boss I was putting in my two weeks and this song came on. It may just have been that that moment in time was powerful for me, but this song always gets me.

Seasonal playlists are a thing I'm trying out; this is the latest addition to "Sounds like Fall."

Eli Young Band – "Even If It Breaks Your Heart"

I must have listened to this song a dozen times before I realized where I knew it from.

Will Hoge – "Even If It Breaks Your Heart"

In 2009, Hoge released this song, and I loved it. Turns out I still love it, but I oddly like the Eli version, too.

I love this song. It's from 2003, but I couldn't resist putting it on here in case you hadn't heard it already.
Posted by Aaron Bergstrom at 9:22 AM