The Return of Guest List Week: Scott's Best of 2015

[Hey, do you guys remember 2015? We do! There was some great music, and we're not done talking about it. It's the Return of Guest List Week! With Scott Lawson!] 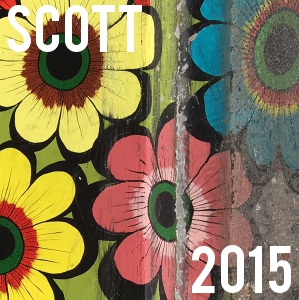 As in previous years, my list is of songs representative of the best albums of the year. So, if you like any of these songs, check out the albums.

Courtney Barnett, “Depreston”—Her songwriting is like no one else’s. It’s totally mundane and completely not mundane.

Father John Misty, “The Night Josh Tillman Came to Our Apt.”—He is wicked. He is hilarious. He is wickedly hilarious. “Josh Tillman” is one of the meanest/funniest songs ever. It’s “Positively Fourth Street” for Millenials.

Calexico, “Falling from the Sky”—Although I have always loved this band and their mariachi horns, I love the addition of the Moog line. This is their best album yet.

Sufjan Stevens, “Fourth of July”—The first time I heard this song was (oddly) on the radio and I had to pull the car over. You’ll only appreciate this song if you’re a parent or the child of a parent. Beautiful. Sad.

J.D. McPherson, “You Must Have Met Little Caroline”—The second I heard this song, I knew that my band had to play it. It cooks.

Pops Staples, “Somebody Was Watching”—One of the great guitarists and vocalists comes back from the dead and kills it.

James McMurtry, “You Got to Me”—Just one of a dozen breathtakingly literate and heartfelt songs on an amazing record.

Waxahatchee, “Under a Rock”—I love everything about this song and this album. The single fact that this album and Courtney Barnett’s were released in the same year makes it a great year for music.

John Moreland, “Cherokee”—Enjoy John Moreland while you can. He doesn’t look well—and sounds a little depressed.

Great Peacock, “Take Me to the Mountain”—They do a kind of a Head and the Heart thing, but it’s good.

Lilly Hiatt, “Too Bad”—“You think the townies even give a shit? They’re drinkin’ their dinner just to deal with it.”

The Mountain Goats, “The Legend of Chavo Guerrero”—I don’t know how it happened, but this song has become my jam. One listen and I’m coming off the top rope.

Chris Stamey, “Where Does the Time Go?”—All these years after the dBs and Stamey is still writing great quirky pop songs.

Lee Harvey Osmond, “Hey Hey Hey”—He is more than just a great band name.  (Not on Spotify, Soundcloud link below)


Jim White vs. The Packway Handle Band, “Smack Dab in a Big Tornado”—These guys would be great at a house party.

Phoebe Bridgers, “Killer”—With Kathleen Edwards retired, I was thrilled to hear this record.

Purity Ring, “Stillness in Woe”—Soak in the atmosphere, and the cool melodies.

The Weather Station, “Floodplain”—Worth listening if only because the singer sounds very much like Sandy Denny or Linda Thompson.

Faith Healer, “Again”—This is one of those languid, half-committed would-be Seventies poppy-kinda bands that I always like. If I’m being honest, they sound at least slightly like The Partridge Family fronted by Christine McVie. But better than you’d think that would be.

Will Hoge, “The Last Thing I Need”—A certain kind of country, done right.

Galactic, “Does It Really Make a Difference?”—Oh, yes, you are hearing that right: it’s Ms. Mavis on the vocals. So good.

Desaparecidos, “Slacktivist”—The title alone sells this song. Conor Oberst’s “garage emo” project apparently almost killed him, as he ended up in the hospital and had to cancel their tour this fall.

Jason Isbell, “24 Frames”—On the wagon, Isbell has proven himself one of the best songwriters of this age (not that he was bad before). Almost makes one want to give up drinking.

Gill Landry, “Take This Body”—Landry was formerly in Old Crow Medicine Show. As this song reveals, his solo work is more introspective.

Jon Cleary, “Beg Steal or Borrow”—One of the remarkable number of excellent new- soul albums released this year. The horns, the muted bass, the sandpaper vocals. The genuine article.

Craig Finn, “Sandra from Scranton”—If Finn will be releasing solo records as good as this on those years when THS is silent, we are all winners.

Maia Sharp, “Little Bottles”—This is a nearly perfect song. I always wanted to write a song called “Little Bottles,” but she’s now done what I’d hoped to do. I don’t begrudge her, as she’s done it so well.

EL VY, “Return to the Moon”—For those of you looking for a less dour version of the The National, here you go. Almost a pop song.

Reno Bo, “Strange Maps”—I love this song, but I like it even more because, when it was released as a single, the flip side was a faithful cover of “Box of Rain.” In the Year of the Dead, one of the best Dead-related things to happen.

Andrew Combs, “Long Gone Lately”—All These Dreams was one of the best albums this year. On this song, and much of the album, he sounds like a perfect combination of Gordon Lightfoot and Roy Orbison.

The Orphan Brigade, “Pale Horse”—The album Soundtrack to a Ghost Story is a ghost story set to music, plus a cool film to accompany it.

Lindi Ortega, “Tell It Like It Is”—I will not be ignored, Dan.

Anderson East, “Devil in Me”—This guy has an amazing voice and writes really good songs. One of the best albums this year.

Dave Rawlings Machine, “Short Haired Woman Blues”—I love the presto-chango thing that Rawlings and Gillian Welch do, where one year they do a DRM album and the next they do a Gillian Welch album. Whatever they call them, they are always really good.

The Pains of Being Pure at Heart, “Ballad of the Band”—The new kings of jangle pop.

Bjork, “Stonemilker”—One always has to resist the urge to wish heartache on their favorite songwriters, but Bjork’s misfortune is our gain on Vulnicura. The album reminds me a lot of her masterwork, Homogenic. Majestic.

Tame Impala, “Let It Happen”—Why does then sound so good when it sounds like now?

Beach House, “Majorette”—What a great album. I could listen to just this one syncopated arpeggio all day.

Ona, “Ides of July”—I don’t know who these guys are, but The War on Drugs didn’t release an album this year, and this’ll do.

Lucero, “The Man I Was”—He writes great songs. Don’t tell anyone, but I wish he hadn’t shredded his voice.

Daniel Romano, “The One That Got Away (Came Back Today)”—For me, Romano is this year’s Sturgill Simpson. Doing the old school stone country thing perfectly.

The Minus 5, “It’s Magenta, Man!”—Scott McCaughey is the Honey Badger.

Best Girl Athlete, “Talk”—I probably would have picked this for the band’s name alone, but they’re good too, so everybody wins.

Robert Pollard, “What a Man”—Guided by Voices is one of those bands I missed while they were actually around. I’m just thankful that Pollard continues to make great music. I’m still waiting for him to do that “Frozen Sissy” project with his brother, but this will do for now.

The White Buffalo, “Go The Distance”—This guy constantly surprises. In amongst his sensitive singer-songwriter musings, he proclaims “You’re not just a woman, you’re a piece of ass!” OK.
Posted by Aaron Bergstrom at 7:52 AM