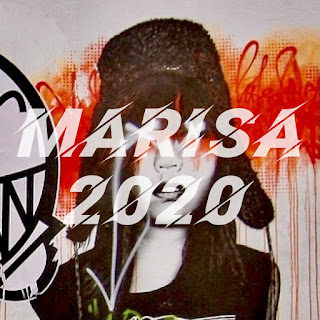 Every year I keep a list of releases I’m excited about, interested in, want to check out, etc. (I used to do this just for myself, so it was a relief when Aaron invited me to participate in Guest List Week). Naturally I had a list going this year as well.

Of course, it being 2020, this list disappeared from my phone at some point in October.

Therefore, I’m probably forgetting some stuff this year. Maybe not releases off my top ten, but stuff I’d include in my honorable mentions. It’s the kind of thing that keeps me up at night (that, and the skyrocketing Covid numbers. Oh 2020!).

Despite this being a terrible year, there was some amazing music. The lack of live music has definitely had an effect on my music consumption - I feel somewhat less engaged in music this year, which is disappointing - yet at the same time, some of the most memorable moments of joy or hope or happiness have been tied to this year’s releases. And for that, I am endlessly thankful.

Wowowowow. What a great 2020 discovery. Had I found this album earlier in the year, I think it’d be way higher up on the list.

Track: “My Eyes Are T-Shirts”

I expected to immediately fall in love with this album but that hasn’t happened yet. This means one of two things: it’s a slow burn that will take time to get to know, or The National is greater than the sum of its parts. Jury is still out.

Kevin Morby is such a prolific songwriter that I don’t think a year goes by without one of his releases. That’s not a bad thing. My only complaint about this song is that it’s not longer.

Another great 2020 discovery. “Animal” (and many of the other tracks on the album) is the perfect combo of 90’s throwback and modern day singer-songwriter. It scratched an itch I didn’t even know I had, and if I could encourage you to check out one new artist this year, it’d be her.

I feel like Katie Crutchfield has been working on reinventing herself for awhile now, and she really hit her stride with this year’s Saint Cloud. I was ready to dislike it - Cerulean Salt/Ivy Tripp will forever be my favorite Waxahatchee era - but this is a fantastic album. She’s an amazing artist who knows what she’s doing and darnit it’s time I just trust that.

5. Bright Eyes - Down in the Weeds, Where the World Once Was

I had a conversation with a friend about this album earlier this year, in which he said he was disappointed with the new Bright Eyes album because “it just sounded like another Bright Eyes album. Nothing new or different”. Which made me realize - that’s what I like about this album. In such a crazy, unpredictable year, we got a new Bright Eyes record after twelve (?) years, and it was really great and also comforting. It’s nice that some things don’t change.

Oof. I have literally been going back and forth on what to say about this album since it came out. Seriously, after the first few listens I found myself already debating what to write for Aaron’s year end list (of course followed by thoughts of “Will there be a year end list? What if Aaron and Ilana get Covid? Oh god that would be terrible! Wait - they left America. That was smart. Jerks.” Etc., etc). I haven’t been able to fully grasp how I felt about this album because for me, it lives in the shadow of Stranger In The Alps. And I feel like that’s not fair. This album has some amazing tracks - the first four songs (not counting the short intro) are just perfect. “Graceland Too” and “I Know The End” are equally fantastic. But the album itself just doesn’t surpass Stranger In The Alps. I really wanted it to - but it doesn’t. And that’s ok! It’s still a solid record. But I can’t help feeling a little disappointed. And then I feel bad for feeling disappointed because it’s a great album. And round and round we go. I clearly haven’t come to any real conclusions here so let’s just talk whenever her third release comes out.

(I will say, however, that this album led to my favorite game of 2020, which was “Which Songs On Punisher Are About Conor Oberst?” “Moon Song,” obviously. And maybe “Savior Complex”?)

Hoo boy, if you’re on the T Swift hating train it’s time to get off and embrace this absolutely fantastic record. I was already kind of obsessed with the Jack Antonoff/Taylor Swift songwriting duo, but then they threw Aaron Dessner into the mix and everything went next level (also an argument in favor of The National not being greater than the sum of its parts, so apologies to Matt Berninger). But seriously. This record is beautiful, and sad, and clever, and catchy, and everything that’s great about music. It is hands down one of my favorite things that happened in 2020 and I am endlessly thankful for that (and now there’s another album that I haven’t even gotten to listen to cuz I need to get this sent to Aaron, but seriously, yowza).

Every Perfume Genius release is solid, but nothing has ever topped Put Your Back N 2 It - however this one might, and that’s saying a lot. And nothing made me miss live music more than a Perfume Genius release and no show to look forward to. Let’s all say it together now: “Hopefully in 2021!” (I could add that sentiment to every one of the albums on my list, but especially Perfume Genius. His live show holds a very special place in my heart).

I don’t think there’s anything I can say about this album that hasn’t been said by many, many better writers than myself. I will say, on a personal note, that Fiona Apple feels like a soundtrack to my life. Tidal came out when I was 16 and I have loved each of her releases since then - each one takes me to a very specific time period in my life, and everything I was feeling and experiencing at the time. And this album, with its cacophony of sounds and the feeling of having experienced something traumatic and come out on the other side, wiser and uninterested in dealing with anyone’s bullshit anymore, but still admittedly vulnerable - well, has any other album captured 2020 better than Fetch the Bolt Cutters? Not for me, at least. And I’m thankful for the nearly universal acclaim this album has received because Fiona deserves it. She was doing things and saying things in the 90’s that truly paved the way for women artists now, and I think that is finally being recognized. So for better or worse, 2020 is Fiona’s year. And thank goodness, because I wouldn’t have gotten through it without her.