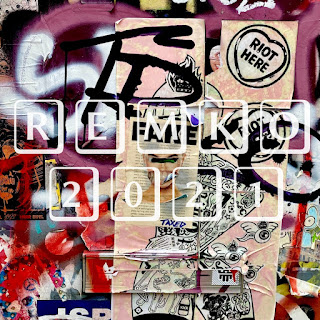 Weirdly enough I never listened less to music than this past year. A mere 31,000 minutes according to my Spotify Wrapped. (That used to be more than double in the past years.) But I did listen to 127 different genres. My top 5 genres were all some sort of dance music, and so will be my list. I’ll give you my 20 dance/pop songs of 2021. (I cheated once or twice, but I guess Aaron can forgive me for that.)

I didn’t make this list in the order of how much I liked the songs but more in the order to make a decent playlist. If I like one song more than another really depends on my mood of the day. So it would never do justice to the songs or my taste of the day.

Black Coffee is a South African DJ/producer who makes really laid back dance tracks. Here he collaborated with Diplo and, one of my favorites, Elderbrook.

Another South African producer. (I think Afro-house will keep growing the next couple of years). I played this song all summer long.

No year-end list without Jessie Ware. I love Jessie.

Two Melbourne based producers teaming up for a great song.

This song reminds me of MJ’s “The way you make me feel.” It has a similar beat. If you haven’t listened to Laura Mvula’s album PINK NOISE, you should.

“CRY YOUR HEART OUT” – Adele

Okay this is not really a dance song and according to many the worst song of the album, but I love it. I love the reggae inspired beat.

Two queens of Nu-Disco making a track together. It took me a few listens to feel the track, but now I love it. If you haven’t seen the video yet for this track prepare for a real CAMP ATTACK.

This song is from 2020, but I came across it last spring. Cyn signed to Katy Perry’s label a while ago. So if Katy approves, who are we to argue.

Wasn’t I the one that helped you lace up your dancing shoes?

So you could stomp out of that closet

Did you give a Diana Ross cloth

When you cha-cha-cha’d your way into the Loft?

I rest my case!

“24 Hours” is a great follow up single to “Fingers Crossed”. The album Agnes released this year has also some pretty good songs.

A great pop song. Very Charli XCX, not so very The 1975. But that is what makes this collab so nice.

I’ve been a fan of Ladyhawke since she released “Paris is Burning” and “My Delirium” back in 2009. Everyone knows PNAU nowadays from his remix for Elton John and Dua Lipa. But he’s also part of the duo Empire of the Sun, and everyone knows “Walking on a Dream.”

This remix is better than the official Studio 2054 Remix used in Dua’s live stream last year. You can also hear Dua’s voice way better in this one.

Elderbrook makes great dance tracks. He’s playing @ the Melkweg on April 22nd next year. If you have the chance I highly recommend you go.

I love this collab. I love a dark dance track.

Talking about a dark dance track. This one you gonna love or hate. There is no in between.

I always have a ZHU track on my list. He’s one of my favorite producers. He’s great at building up a song.

I played her album a lot this year. This is one of my favorite ones.

Posted by Aaron Bergstrom at 12:53 AM