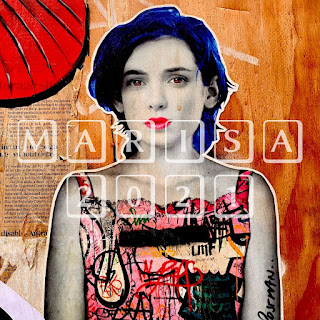 I have a toddler, I’m pregnant, I guess it’s still a pandemic, podcasts have really encroached upon my music consumption, we move next week and Christmas is a week from Saturday but HERE I AM. I wouldn’t let a year go by without making a top albums list. Well, I probably would (and regret it sometime next April), but at least Aaron is here to keep me honest. AARON NEVER GET RID OF YOUR BLOG. Aging music lovers need you!

From the first track, this album stopped me in my tracks. I’ve always been a fan of Japanese Breakfast but this feels like her crowning achievement (uh, no pressure on that next album). It’s easy to consume yet complex, emotionally wrenching yet something you can dance to. It deserves the top spot because it’s just a perfect album. Really, I don’t know what else to say about it.

Snail Mail’s first album was great but WOW. Lindsey Jordan really grew up between her last album and this one (she also had her heart broken, went to rehab, had to move back in with her parents in the midst of a pandemic … Usual early 20’s stuff). So I guess she had some decent fodder for her sophomore release. Still, I wasn’t expecting such a grown up (that seems like a lame term but I can’t think of a better one) album from her. It’s just beautiful.

In my humble opinion, their best album to date. I feel like there are some purists out there whose heads would spin reading that, but there you are. This album is fantastic and every track is an achievement.

If I was in charge of releasing albums, I would never let an artist release an album at the beginning of the year. On the one hand it was just what my heart desired in the middle of February, when everything is dreary and you’re dreaming of summer (YES AARON I KNOW I LIVE IN CALIFORNIA AND NOT AMSTERDAM/THE MIDWEST). On the other hand, by the time I made this list I hadn’t listened to this album in months, and, had I not revisited it, it would have ended up much farther down on the list (simply because I forgot how great it is). But seriously, if you haven’t discovered Claud, get on it! This album is catchy and unique and from the point of view of a progressive, smart Gen Zer. All that and it only makes me feel a *little* old.

Lucy Dacus is a national treasure. Not sure this album can surpass Historian, but I also think I’m being biased and not completely fair. This album is beautiful, “Thumbs” is devastating and she should not be the least well known member of boygenius.

Dave Benton (aka Trace Mountains) had posted something on Instagram around the time of this album’s release about a 10 minute song he’d written, which intimidated me and gave me the wrong impression of this album. There are no 10 minute songs, just very consumable 3 and 4 minute songs. Had I not wasted time and gotten to know this album sooner, it may have ended up higher on the list. It’s beautiful and the perfect next step from his last album (which I also loved). It’s full of sad and clever lyrics and at the end of the day reminds me of my beloved and now defunct Weakerthans, while still being very much its own thing. I think this is the album I’ll be spending the most time with as we come to the end of the year. I just adore it.

I never got into Taylor Swift until He Who Must Not Be Named covered 1989 in its entirety. Thus, I never really listened to her pre-1989 releases. So while I know some of the more popular tracks from Red, overall this was a new release for me. I’m not complaining.

I was so excited for this release and I LOVE the heavy 90’s vibes. It reminds me of Smashing Pumpkins, Liz Phair, Belly (the comparisons could go on) - all my 90’s faves. Yet at the end of the day I couldn’t help but feel like it was lacking something. Still, it’s an inspired album that absolutely deserves a spot in the top 10 of 2021.

I am an unapologetic Bleachers fan. Bleachers is cheesy and overproduced and I am here for every minute of it. Jack Antanoff wrote this album as an “ode to New Jersey'', and without that context it would probably feel a little out of left field. However with that context he absolutely nailed it, complete with sax solos and a song with the Boss.

Honorable Mentions (in no particular order):

A beautiful and chronically underrated band.

This album is beautifully produced and I liked Julien with a full band behind her more than I thought I would. But nothing beats the starkness of that first album. It was like a punch in the gut … And with subsequent albums, it sometimes feels like she’s just twisting the knife? (I realize I just mixed bodily injury metaphors there). Regardless, when I go back and listen to this album I have to say, it really is beautiful.

Lana would probably end up higher on this list if she’d just stop releasing albums every two minutes and give me a minute to soak them in. On the other hand, imagine having that much music in you. I have a real love/hate relationship with such prolific musicians.

The album I probably would have written at 17. Also the album I never would have listened to at 17 because it was “too commercial”. Being a teenager is terrible.

See above. But “Black Bathing Suit” is fantastic.