Contenders Series #31: Hold Steady - 'We Can Get Together" 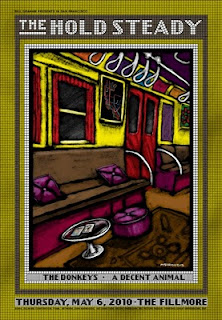 I don't think I have much more to say about the Hold Steady.  This is not true ... I already have on more post in the works, on Heaven is Whenever opening track "The Sweet Part of the City."  But I do feel like I'm reaching a point of diminishing returns when it comes to writing about the band.  I am nearing exhaustion.

It might even be possible that I'm reaching a point of diminishing returns when it comes to listening to the band.  That's probably not true - the new album is still great - but I think it's a valid concern.  If you've always wanted to hear me write something quasi-negative about the band ... well, stick around.

I have had more than my fair share of magical concert experiences with the Hold Steady.

The first time, at Slim's, when I had just started dating Ilana, and everything in the world seemed to be on the verge of making sense.

The second time, at Mezzanine, when I threw my old Johan Santana jersey onstage and Craig wore it all through the encore - it's still absolutely one of the five greatest moments of my life.

The back to back nights at the Fillmore with Drive By Truckers, each one perfect in its own way - the first night pressed up against the stage with Kass and JD, close enough to steal the set list, the second night dangerously drunk with JD and Powers, wandering around lower Haight bars, spending the entire next day in bed.

I should not expect this kind of transcendence every time.

The crowd at Hold Steady shows has become desperate, and depressing.

We got there early, with the usual Hold Steady crew (myself, Ilana, Kass, JD, Ilana's brother Mike, and various members of his concert crew).  We staked out our usual spot, on the Tad side of the stage, two or three rows of diehards from the front.  Opening band The Donkeys was surprisingly good.*

* If you have a long-haired guy in your band who just plays bongos, and your opening song is an extended instrumental featuring sitar, I am going to start thinking of all the ways I can mock you.  If you then start playing excellent alt-country, Wilco-and-Workingman's Dead influenced songs ... I am man enough to admit when I was wrong.  Well played, The Donkeys.

There were a surprising number of middle-aged men in the crowd, balding, in tight t-shirts, fighting their way towards the stage.  The mosh pit front and center was something like a failed religious experience, with arms reaching out to Craig like they wanted him to do something, something specific, increasingly frightened that he wouldn't, that maybe he couldn't.  These were people who needed something, something more than a good time at a rock show.

There was a woman standing near us, one of the kind that grabs you on the arm when she talks.  She was friendly at first, then grabby, then frighteningly aggressive, hanging off of every stranger around her in turn, returning again and again after exhausting all her other options.  I know this is going to sound mean.  I don't want it to sound mean.  I don't think she will ever read this, but still.  I know her heart was in the right place.  We love the same band.  But I couldn't help leave with the feeling that she was looking for some kind of immediate and total acceptance from a large group of strangers.  Maybe she usually gets it.  Even so ... that's a dangerous thing to need.

The diehards have decided that Separation Sunday and Boys and Girls in America represent the two sides ot the band's peak.  You can tell by the instant reactions to songs.  People fear that this is a band on the way down.  Pitchfork gave the new album a 6.2.  Rolling Stone loved it, as sure a sign as any that your favorite band is teetering dangerously close to irrelevancy.

There are fewer scenesters at the shows, more diehards.  It was surprisingly close to not selling out.  You can love a band in a vacuum, sure, but your relation to art will always be marked by society's feelings about it.

What does it mean to love a band that isn't quite as cool as it used to be?  What does it say about you?  Is life passing you by?  Are you becoming irrelevant?  Are you one of those weird people marked by cultish devotion to a cultural afterthought?  I got the feeling a lot of people in the crowd at the Fillmore that night were grappling with those questions.

The boys sounded good.  They played a long set, with a long encore, and seemed to be enjoying themselves.  They sounded the same as they always did, with just enough new wrinkles in the post-Franz era to make things sound fresh and interesting.  They have never - NEVER - let me down.

That being said, I don't think I need to get there early next time, and stand in the front, and reach out to other people as fanatical about the band as I am.

That being said, I know there will come a time when the Hold Steady will come to San Francisco, and I won't be there.

And it will be okay.