[Next up on Guest List Week, it's Carl Anderson! Finally, a voice for the universal desire to run away and join Katie Crutchfield's army. I'm in!] 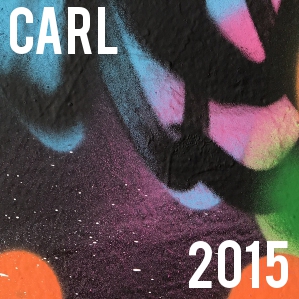 This is the year I started to spend a lot of time listening on Spotify, especially for new music. At some point this spring I moved this to the top of my 2015 playlist, and it has stayed there since. It seems everybody else got over this track, but I’d feel dishonest if I pretended I did.

Ivy Tripp is this year’s indie rock classic. Had this album come out when I was in college, I would have told everyone I wanted to drop out of school to work for Katie Crutchfield, or her manager, or her label, or something.

The hype over Grimes went over the top this year. It’s worth thinking about why all these folks are expressing wild hopes about someone who clearly isn’t benefiting from the scrutiny. True, Claire Boucher seems focused on authenticity, and tries not to become a formula. But on the other hand, she’s not going to fulfill these journalists’ absurd fantasies about next year’s music industry, because no one is. If there was less hype maybe she would give us more good music. Like this track, which could only come from her, and which kills it so hard the hype won’t calm down soon.

Chant-rock with country feel, this is another track I would have worn the grooves off of this year, if Spotify used grooves. Still not sure what a Saturday night kinda pink would be, though.

Unless this is the first time you’ve read this blog, you know enough to listen to this album. I picked this track because it heroically survives a bad decision: the drop is so over the top it would make Skrillex blush. It must be hard for a band that plays so many festivals to resist this kind of thing, given that it whips the crowd into a frenzy very reliably. Give the people what they want, as they say.

Another strong performance from the most overlooked, should-be R&B star. He avoids nostalgia for a time before electronic music, and the Weeknd’s hair.

I’d been listening to this album for weeks when I read someone calling her “overrated.” Oh Internet, you make me so angry sometimes. In response I listened to this song on repeat for an hour, conclusively proving to the universe that no matter what some dude said on the Internet, Courtney Barnett writes great songs.

8. The Mountain Goats – “The Legend of Chavo Guerrero”

Speaking of great songwriting: this.

What a joy it must have been for the band to discover that these songs, stripped of Beirut’s tendency toward over-instrumentation, over-production, and over-seriousness, not only work, but work better.

I imagine that when a guy and a girl first try singing in harmony, it is pretty clear whether it is going to work or not. I like this because they keep it simple and focus on how good they sound together.

You need to have a sense of humor when listening to Father John Misty. If you can manage that, you’ll like this track a lot.

12. Someone Still Loves You Boris Yeltsin – “Full Possession Of All Her Powers”

Do you ever get that feeling of weariness when you realize a good idea is only a start, and it takes a lot of hard effort to carry it through to something finished? Then SSLYBY is your antidote. This track starts with 30 seconds of perfection, strings along with some “na na na,” wanders to the bridge, then tries to repeat the beginning, but the band is too high and just gives up on the last verse. Who cares? SSLYBY has the courage to take a good idea and be satisfied, right there.

13. The Sidekicks – “Summer Brings You Closer To Satan”

When the Shins had that song in Garden State, it seemed like they would be pumping out hits for a decade. This sounds like one of those follow ups that never happened.

See Claire, we don’t care at all whether a track is 100%-pure-authentic Grimes. It doesn’t even matter if, for example, some of us dislike Jack Antonoff a bit. Everybody just wants more Grimes. Taylor Swift doesn’t wait around until she can write hits without help, she just gets music out to her fans. (And last year’s Taylor Swift + Jack Antonoff tracks are not as good as this, not even close.) More Grimes please, whatever it takes!
Posted by Aaron Bergstrom at 8:33 AM