[It's Guest List Week! The best week! You've heard my thoughts on the year in music, now let's hear from some other people who have equally great taste in music (but somehow have the ability to express their opinions in under 10,000 words)! Guest List Week II continues with Desa, on newborn dance party logistics.] 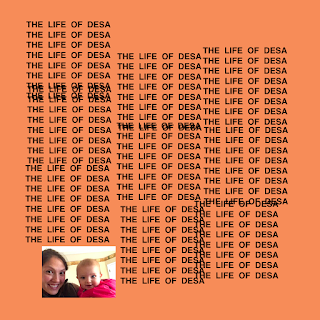 This year was not like the others.  I spent less time at impromptu living room dance parties  and more time sitting in a chair awake in the middle of the night wishing I was asleep.  I spent less time singing loudly to pop songs in the car and more time whispering and trying to remember the name of that sad song my mom used to sing me.  I spent very little time drinking.  I think I had one whiskey all year.  Instead it was my job to feed, to care, to give my time, my body, my whole attention.

I had a baby this year.

Nothing is the same as last year. As this song says: "We don't do the same drugs no more."

But this year meant realizing I had a whole other chamber to my heart that I never knew existed.  It meant watching with awe as my husband transformed into a capable, attentive, adoring  father, and the best darn swaddler YouTube has ever produced.  It meant experiencing the power of walking down the street and thinking "If anyone tries to hurt my kid I will straight Mama Bear their ass," and meaning it. It meant laughing and smiling everyday -- and going to bed at night feeling grateful, incredibly grateful, and humbled by the chance to have this sweet girl in my life.

These are not the same drugs.  But these are good drugs.

Because it's fun and my middle name is Mercedes.

This has become Claren's not-so-typical lullaby.

I just learned of this artist earlier this month and two of his songs made it on my list.  They are different.  They sound old and new at the same time.

Sometimes you just have to put your phone on silent.

I am partial to songs about California.

I had a Jon Bellion song on my list last year too.  I think his lyrics are clever.

Even though this year has been completely different for me, there is comfort knowing Nelly is still out there singing about money.

Every time I listen to this song and it gets to the part where they repeat "it's enough" so many times that it really is ENOUGH, I think "Why do I even like this song?" and then I play it again.

"The Night Me and Your Mama Met" - Childish Gambino

Maybe I like "Awake, My Love!" so much because the album is a tribute to his newborn son.  We are in a similar spot in life.  This connects with me.

I said I spent less time dancing in the living room.  A girl still has to groove sometimes.
Posted by Aaron Bergstrom at 9:11 AM