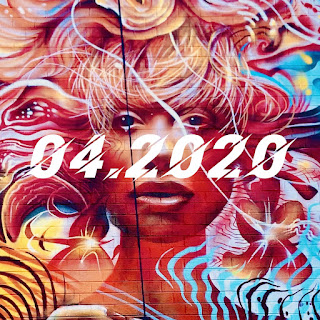 It's four minutes of uncut pan-African joy, which should be enough for you, but for me it's also a handy canary in a coal mine for judging my daily depression levels. Most days, it puts a smile on my face and fills me with hope. Every so often though, it feels like a cloying, syrupy slap in the face. Our goal going forward is to limit those days. With a gospel choir!

Just found out that Phoebe and I share the same birthday, and I am absolutely putting that on my resume.

Timeless in the best possible way. This is exactly how I want rock music to sound. From "band I've never heard of" to "most anticipated album of the month" almost instantly.

No idea why so many big artists are delaying albums right now. The Charli plan makes way more sense to me - while everyone's locked in their homes, take over the world.

I still can't get over how good this album is. Honestly, how many genres does she hit in 43 minutes? It's the entire history of TRL in a blender.

Perfect 10 in Pitchfork, the first on in ten years (My Beautiful Dark Twisted Fantasy, if you're looking for the trivia answer). So many Album of the Year articles have already been written, edited, and scheduled for publication. Just take the rest of the year off, music journalists.

If you're like me, it's the starting point for your wife playing you versions of Laura Branigan's "Gloria" in five different languages. We're all dealing with the crisis in our own ways.

New Zealand: Eliminated coronavirus and The Beths are from there. What has your country ever done?

Okay, your challenge is to write a super-catchy song that includes the following lyrics:

"I'm not trying to say we won't see the day there's a genocide of the poor, it just might come in a heatwave."

"Consent isn't complex, just no one taught it to you"

Good luck! (I love this band so much.)

(Totally random aside: there's an allusion to "The Ballad of John and Yoko" in here. Is that the most famous song about Amsterdam? What are the other options?)

Yes, we need way more power pop in our lives! I'm treating this band's very existence as a cosmic tribute to Adam Schlesinger.

Just learned that the bass player is currently in law school, and now listening to them feels like a rescue mission - there's still time to make this band big enough that he can drop out.

Passes the only test for a Killers song, which is "Could my Dad and I dance awkwardly to this at a wedding reception?" We could! I didn't think they still had it in them!

I want to know so much more about how artists choose which songs make their albums. Because Big Thief put out two records last year, and this wasn't on either of them. This is an outtake. This is something we weren't supposed to hear, but they wanted to put out something new during the crisis. They were going to throw this away. And it's wonderful.

If we're just ranking songs that came out in the last twelve months called "Sunflower," this one is way ahead of both Vampire Weekend and Post Malone.

Somehow Rostam has a songwriting credit on every song on this album but one ("Hallelujah"). Is Rostam just in the band now? (Not against it.)

It hasn't quite come together in my head yet, but I have no doubt I could write 5,000 words about this song. You decide whether that's something the world needs. Until that happens, just know that Sam Hunt has apparently been crowned this year's "country artist it's okay for non-country fans to like." Would be a contender for Song of the Summer in a world where we have a summer.

There's also a dissertation to be written about how we're collectively reacting to the pandemic scraps we've been thrown by pop royalty. We all immediately forgot about that Rihanna feature, and I have literally not heard one word about Nicki Minaj on that Doja Cat song, but apparently this one passes the bar. It's ... fine.

Look, you'll never hear me say a bad word about Xanax, but I do blame it for what seems like an entire generation of anaesthetised mumbling sad-boy rap. (Might just be easier to blame Drake.) This, though ... this I like.  This is the minimum level of bounciness I require from my hip hop singles. Are there more artists like this I just don't know about?

This has been around for awhile, but it's the song that's been in my head most often this month, so I had to find a place for it on the list. It's a credit to 100 gecs that a different subsection of the internet seems to find out about them every couple weeks, with very different reactions, mostly light mockery of their aesthetic (check out the "Money Machine" video), but no such thing as bad press, right?

Not a choir, just one guy from Pittsburgh still recovering from an evangelical Christian upbringing so yeah, I feel like we'd have things to talk about. "It shouldn't have to be so hard / To get back to who you are."

The band says they deliberately tried to make their guitars sound like bees for this one. I guess I hear that.

Maybe, just maybe, finally starting to get into a band people have told me I should love for years.

Probably the catchiest of the many, many new Hayley Williams songs, which is really saying something.

At first I was disappointed this song isn't longer but upon reflection this is exactly as long as it needs to be.

Somehow Flea plays bass on this?

Now that I'm very, very old, I have all of these long-term relationships with bands that I still don't really know anything about. "Suffering Season" came out in 2010. A handful of Woods songs have made my Top 100 lists. And yet, can I tell you one fact about the band? I cannot.

How much time do you still spend looking at concert dates? Fenne Lily is playing Bitterzoet October 6. There's at least, like, a chance that happens, right? Am I still in denial?

Artist mythos has such an impact on how I react to their work. When Charli XCX puts out a song she wrote at home yesterday, it's fresh and exciting, a bolt of lightning from a kinetic genius. Bon Iver isn't supposed to be that way. Justin Vernon is supposed to emerge from the woods after living on nothing but psychedelics for the past five years with a masterpiece album in his hands. So when he writes a song quickly, I tend to dismiss it, like this one. But that's on me, really.

Finally understand why most comic book nerds hate crossovers. Turns out you can't just mash two great artists together and get a great song. This is the worst thing either Phoebe or The 1975 has done all year, and yet ... it's still pretty good.

Posted by Aaron Bergstrom at 12:31 PM