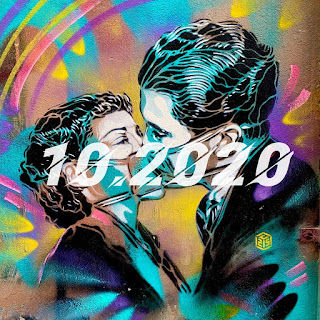 Lead single from an album that won’t be out until next February, as if we still have time for four-month album release promo cycles at this point in history. The guys from Indiecast (my favorite music podcast, no disrespect to Switched On Pop and Song Exploder) have heard the album and they were joking about how it’s their album of the year for 2021 since it’s the only one they’ve heard, then they both got weirdly serious and said it would be their album of the year for 2020, too. Based on this song, they might be right.

Like all Swedes, I Love Your Lifestyle has that Massive Pop Hooks songwriting gene, but apparently they’ve decided it’s more fun to be an indie band than it is to be Max Martin. They refer to themselves as “pop-emo-indie-rock-medium speed music,” and they sound like a combination of most of the least cool bands that I still love wholeheartedly (The Shins, Shout Out Louds, Band of Horses, etc.)

Literally discovered this band because their Twitter name was “Gay Avril Lavigne.” Does not disappoint.

I make a lot of snap judgments when listening to new music, and I almost never give anything a chance to grow on me if I don’t connect with it on first listen. (Plenty of songs go from “this is pretty good” to “this is amazing,” but very few go from “I don’t really get this” to “I love this.”) Bartees Strange, though, has made the leap. His lead single, “Mustang,” was #21 on my July Mix (the monthly mixes aren’t really ranked by my personal preference, I do try to sequence them so they flow together, but I also try to put my favorites near the top) and it will probably wind up higher than that on my year-end list. “Boomer” is great, too (it’s about Oklahoma, not old people), and really the whole of Live Forever is worth your time. If you don’t like it on first listen, you should really stick with it.

A portion of the profits from “Needing You” will be donated to Juntos, a Philadelphia-based immigrants’ rights organization. So if you like it, maybe go throw them a dollar on Bandcamp.

Another lead single from a hotly-anticipated 2021 release. I love that she's working with more of a full-band sound on this one and I hope there's more of that on the album.

I know I'm just setting myself up for disappointment by even thinking about concerts right now, but wow I bet Pinkshift are incredible live.

One unexpected side effect of moving to Amsterdam is that songs about bike accidents are now almost too intense to listen to.

There’s a story about this song that’s too good to fact check, and that is that it was commissioned to be on the soundtrack to the new Bill and Ted movie, but was later rejected due to this tweet from the band’s lead singer:

I have no position on whether or not that is true. My position is that I want it to be true.

This, right here, is the only guitar music that anyone cares about in 2020. A guy who has spent most of his career as a terrible rapper was cast as Tommy Lee in a movie about Motley Crue and, based solely on that, decided he wanted to be a rock star. And now somehow he is. This was the #1 album in the US for multiple weeks. I wanted to hate it, but this song is surprisingly good, and Halsey is great on it. Really I’m just here campaigning for a future Halsey pop-punk full length.

Signed to Dirty Hit and all of the sudden they sound 10% more like The 1975. It's really up to you whether or not you think that's a good thing.

My excitement for this one could have been summed up as “New Kendrick! New Kendrick! New Kendrick!,” but Busta is actually really good on this, too. Has he been this good the whole time? I’ve always seen him as a little bit cartoonish, not necessarily someone who needs to be taken seriously. Maybe I was wrong. (On the other hand, maybe don’t have Louis Farrakhan on your next album? Just, like, as a favor to me?)

This is the point where I would normally quote from whatever Singles Jukebox review seemed most on-point, but they haven’t covered this one yet. It’s these kinds of single failure points in the supply chain that make it a risky decision to outsource all of your pop music writing, as I apparently have.

I cannot imagine why anyone would want to be famous. It sounds horrible. In FRANKIE’s case, though, I kinda get it. She’s been making airtight pop music for more than five years now (“New Obsession” was 2015, “Paper Doll” was 2017), and she has to be wondering why other artists have made the leap to commercial success while she hasn’t. And that chorus is heartbreaking:

I'm sick of being almost famous

FRANKIE, come on, you need to find self-worth in something other than Spotify chart numbers.

If there’s anyone who could empathize with FRANKIE, it’s Kitten frontwoman Chloe Chaidez. By my count, she has written at least three perfect pop songs (“Cut It Out,” “Like a Stranger,” and “Sensible”) but to the extent anyone knows her, it’s because she played guitar in Charli XCX’s weird Making the Band Netflix project. “Angelina” isn’t a fourth perfect pop song, but it’s good enough that I will keep holding out hope for better things in Kitten’s future.

My Embarrassing Thought Process: (a) This is good, real summer vibes, perfect for being outside on a nice warm day. (b) So why is she releasing it in November, then? Seems like the worst time to do it. (c) Ohhhhh, right, this is summer in South Africa. So, a friendly reminder … there are multiple hemispheres.

I say it’s about time some straight dudes got in on the disco revival. That’s what we’ve all been waiting for, right?

When you get right down to it, every side is the west side, it just depends on your perspective. This song is actually about the west side of Detroit. It may be the Eastern Time Zone, but the beat is straight California G-Funk. This is like something DJ Quik would have made in the early 90s.

I didn’t know much about Juice WRLD until his tragic death earlier this year, and I certainly didn’t expect him to sound this much like Fall Out Boy. Chicago DNA runs deep.

Released nine days after the Nigerian Armed Forces shot at peaceful protesters in Lagos State. From Fela Kuti to Burna Boy, Nigerian protest music does not mess around.

First signing to Phoebe Bridgers’ new record label, Saddest Factory, and they seem like a perfect match for each other.

“Get Famous” is the standout track from Getting Into Knives, but we covered that one last month. If you still new some new Mountain Goats in your life (and you do!), I recommend this one. (If you want to get even deeper, there are currently 409 Mountain Goats songs on Spotify, so good luck.)

Such a relief that Yola and team took this one in an uplifting direction, because that lineup is a recipe for involuntarily crying in public. This is what we needed right now.

Another band with some of the saddest songs of all time returns with their first new music since 2014 and, thankfully, it comes with a gentle message of hope. Again, a grateful listening public thanks you.

Lenker's family is originally from Niswah, Minnesota, which is one of those places where you have to zoom out on the map three or four times before you see the name of a town you recognize. They do apparently have a water park, though. (I don't really have anything to say about her that hasn't already been covered in this excellent New Yorker profile.)

Third reminder that "Stellar Abattoir" is one of the best songs of the year. (This one is pretty good too.)

In addition to this month's EP, PUP frontman Stefan Babcock also contributed backing vocals to Jeff Rosenstock's beautiful cover of Belle & Sebastian's "Fox in the Snow." Sonically it is the exact opposite of a PUP song, and yet it still works.

Keep telling myself to stop obsessing over why "Cat's" is has an apostrophe but "Tigers" doesn't.

I'm always a fan of happy-sounding songs with really dark lyrics but this has to be the most cheerful song ever written about getting a restraining order.

As Farren put it, "on its surface it’s a love song, but to me it’s about a search for community and passion in a rapidly changing world.” Isn't that just every song right now?

The most unsettling song I heard this month, which probably means it’s good, but I’m going to need some more time with it. I can’t tell if Petey is sincere or not. I think this is an honest song about the challenges of straight male friendship, and if so I think it’s really insightful. Based on the video (and Petey’s entire public persona), it’s possible he sees it as a big joke, and I don’t know if I’m emotionally prepared to be disappointed like that.

Posted by Aaron Bergstrom at 5:10 AM