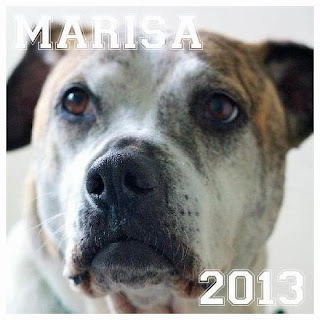 [Today on Guest List Week, it's Family Dog Rescue's own Marisa Plaice! Marisa is currently my only friend with a dog named after a member of the New Pornographers, but I think with enough hard work I can talk Gene into taking in a stray and calling him "Bejar." Follow Marisa on Twitter @marisapage.]

Trouble Will Find Me is my favorite album of 2013 and this song encapsulates everything that is so heartbreakingly perfect about it. This album completely took over my life and put me in a reflective trance for 3+ months and I thought I was going insane… It was awesome.

(2) Phosphorescent, “Terror in the Canyons”

Another track from one of my favorite 2013 releases, and as with my National pick I think it represents Phosphorescent well: he’s a guy who can make you feel wistful and nostalgic for something you can’t quite put your finger on, but without appearing to take himself too seriously or being overly self-indulgent (unlike these song/album reviews I’m writing… Ahem.).

(3) Okkervil River, “All The Time Every Day”

Okkervil is my most favoritest band ever, and this year's The Silver Gymnasium was an awesome, solid album. But this track easily stood out to me as it is reminiscent of pre-I Am Very Far Okkervil, when Jonathan Meiburg (of Shearwater) was still in the band. Okkervil’s songs are still haunting, sincere and painfully full of emotion - a lot of that is due to Will Sheff’s vocals - but I think Sheff's songwriting is stronger when partnering with Meiburg. Regardless I love this band, and I love this track because it reminds me of why I fell in love with Okkervil in the first place.

In a way, this ISN’T my favorite track on this album (I love “Ragtime” - trumpets!) but I chose it for a couple reasons: First, it’s sung a capella and features Case’s amazing ability to harmonize. In addition the subject matter is significant, as it’s about a scene she witnessed while waiting for an airport shuttle in Honolulu, in which a mother was screaming terrible things at her young daughter (like, horrible. Read the lyrics if you feel like getting bummed out). Case was estranged from her parents at an early age, and during the making of this album was dealing with their deaths. When listening to this song you can really hear the pain and conflicting emotions she still feels over her relationship (or lack thereof) with them - it really feels like a peek into a difficult childhood, and I commend the usually tough-as-nails Case for showcasing that vulnerability in such a lovely way.

At first listen, Mikal Cronin sounds like somewhat simple - and awesome - power pop. But there’s so much more going on underneath - both musically and lyrically - it keeps the songs interesting (with albums in this genre I often get a little bored, to be honest). But Cronin is a talented multi-instrumentalist and includes strings and piano (in addition to sweet guitar jams) that are arranged beautifully. There’s also a sadness to his songs that isn’t entirely noticeable at first, and in case you haven’t noticed I kinda like sad music, so… There you go.

THIS IS THE ARCADE FIRE I KNOW AND LOVE WHY DOESN’T THE WHOLE ALBUM SOUND LIKE THIS???… Sorry, I had to get that out. I think - I HOPE - this is one of those albums that you’re unsure of at first, yet something keeps bringing you back, and ultimately it becomes one of your favorites. Some of my favorite albums are ones I hated at first - I actually love that. And maybe I’m just thrown off because it’s different, maybe they are doing something amazing that is over my head, I don’t know. I guess I have some listening to do… But that listening may just entail playing this song on repeat.

These guys are SO ready to be rockstars, and with tracks like this off of this year's Tender Madness (their first full length), you can’t really blame them. Darren Weiss (whose name you may recognize as the drummer for the now defunct Girls) plays drums this time around as well - only this time he’s also their lead singer (a la Phil Collins). So I mean, come on. How could you not go see them live?

Wakin on a Pretty Daze rounds out my top 5 albums of 2013, so it’s kinda weird that this track isn’t higher up on my list, right? Wrong! I think Vile’s strength lies in the hazy, dreamy, haunted feel his albums (and live shows, btw) create - one of those “whole is greater than the sum of its parts” situations I guess. I think this track represents his vibe well, but I definitely encourage you to check out the whole album if you haven’t heard it (and his previous album Smoke Ring For My Halo deserves multiple listens as well!)

Oh Jose Gonzalez, you can do no wrong. The understated “Your Life Your Call” is just as poignant as any of Gonzalez’s solo work, stating in it’s chorus: “It’s your life/Your call/Stand up or enjoy the fall.” Let’s all reflect upon that as we go into a new year, shall we? (Oh and if you haven’t see the sorta-disturbing-why-can’t-I-stop-watching-it-esque video for this track, I highly encourage you to do so. And hopefully I’m not alone in feeling at way about it… Otherwise I’m just a weirdo. Please don’t make me learn that about myself.)

Not as “dancey music with a banjo” as most of Thao Nguyen’s jams (that should really be a genre), but hello, it’s a duet with Joanna Newsom! The combo of two ladies I love makes my head explode, and this song is so darn pretty. Yay!