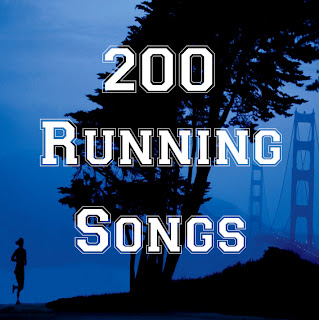 Last week, Heather asked me to put together a playlist for her that she could listen to while running.  Over the years, a lot of people have made the same request, as "running playlist" combines two of my three favorite hobbies (sadly, there isn't really a way to integrate baseball as well).  I've made dozens of playlists for other people, and hundreds for myself ... and for the most part they all contain basically the same songs.  So, because I like making lists, I thought it was finally time to compose a master list.

And here it is.  200 Running Songs.  Check out the full list after the jump.

July 2013 Update:  Somehow this showed up on Pinterest, racked up over a million hits, and crashed my hosting account a couple times.  Since I never meant for this site to be a music piracy clearinghouse (more a music piracy boutique!), I took down the MP3 links ... which led to hundreds of requests in the comment section.  I can't keep up with all of them.  So we're embracing quasi-legality, and Spotify.  Here's the list:


A few overall thoughts about the playlist:

(1)  It's amazing to me how personal and subjective a running playlist can be.  Ilana is HORRIFIED by 99% of the songs I chose (the two she agrees with are "Badd" by the Ying Yang Twins and "You Can DO It" by Ice Cube).  There are 200 songs in this collection, and I'm really hoping you can find twenty or twenty-five that work for you.  Maybe a nice 90-minute mix from the thirteen hours of music here.  If you can't, I suggest you ask Ilana for recommendations.  She has pretty strong opinions when it comes to running songs.

(2)  These are songs culled from the running playlists I've personally made over the years.  I didn't try to seek out new songs.  This list is not meant to be in any way exhaustive.  If you look for running playlists online, EVERY SINGLE ONE will include "Lose Yourself" by Eminem.  It doesn't really work for me, so it's not here.

(3)  My running tastes skew HEAVILY to the radio hip hop of my college years.  I tried to limit myself to two songs per artist, but I cheated a couple times with artists like Ludacris and 50 Cent.  If this were the "300 Running Songs" playlist, there would be a lot more Trick Daddy.

(4)  I also like (a) really happy pop-punk, (b) hip hop with horn or violin samples, (c) mash-ups and remixes, and (d) obvious, cheesy samples.  There's no Girl Talk here, since it's hard to pick one or two songs from his albums, but I highly recommend running to his stuff.  I want as much going on in my head as possible.

(5)  This is the most important overall thought:  a lot of these songs are objectively, unmistakably TERRIBLE.  There is a Ke$ha song on here.  I have made the argument several times that "Built This City" by the Diplomats is the WORST SONG EVER WRITTEN.  And yet, every time it comes up on shuffle, that's an enjoyable six minutes of running, so I keep including it on playlists.  I can't explain how it works.  So, while I'd love for you to incorporate this mix into your workout routine, I ask that you never listen to it while not running.  There are a handful of songs on here that are great in any context, but they are in the minority.

So that's it.  If you feel like leaving a comment, I'd love to hear about your favorite running songs.

Alphabeat – "Heat Wave"
Avicii – "Levels"
Azealia Banks - "212"
Bouncing Souls – "Lean on Sheena"
Bubba Sparxxx – "Comin' Round"
Cher Lloyd – "Want U Back"
CHVRCHES – "The Mother We Share"
Crystal Castles – "Air War"
David Guetta – "Who's that Chick?"
Icona Pop – "I Love It"
Japandroids – "The House the Heaven Built"
The Knife – "We Share Our Mother's Health"
LCD Soundsystem - "All My Friends" (Give it a chance! It's long, but the payoff is worth it!)
Motion City Soundtrack – "Everything is Alright"
Mowgli's – "San Francisco"
Nappy Roots – "Good Day"
Petey Pablo – "Raise Up"
Skrillex – "Bangarang"
Supergrass – "Alright"
Wiz Khalifa – "Black and Yellow"