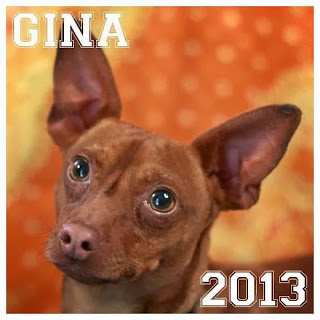 [Guest List Week II continues with Gina Uriarte, who finally (FINALLY!) gets "We Can't Stop" into one of these Guest Lists. A grateful nation salutes you, Gina. (I'm totally serious, by the way. I'm cool with never hearing "Get Lucky" or "Blurred Lines" ever again, but "We Can't Stop" has really improved on repeated listens. Should have been in my 100 Songs for 2013.)]

Kavinsky's 'Nightcall,' off the soundtrack to the movie DRIVE, was one of my favorite songs of 2012. So I was pretty excited for the 2013 album, OutRun, which tells the story of a guy who crashes his car in 1986 and arises in 2006 as a zombie DJ (yeah, it's as ridiculous and/or pretentious as it sounds). OutRun feels more like a movie score than a traditional album - and I can't wait to see the film (which in my head stars a young Michael J Fox and features lots of neon lights and lasers). I may not be a boy who came of age playing video games in the 80s, but this album (and 'First Blood' in particular) sure makes me feel that way.

"Meet me by the river, let's go for a ride with the windows down and the stereo loud." — Is there a better invitation one could get in life? Just tell me when and I'm there.

13. WAYS TO GO by Grouplove

I was really disappointed with Grouplove's 2013 album Spreading Rumours, which sounds a bit like The Pixies meets The Presidents of the United States by way of No Doubt. The exception being 'Ways to Go,' which sounds like vintage (as in way back in 2011) Grouplove. Plus they get bonus points because Hannah Hooper and I share the same signature dance move.

This song has a similar breezy vibe to St. Lucia's 'All Eyes on You,' which I love. If Ferris Beuller existed in 2013, he'd listen to this song poolside while contemplating his future. Plus it was recorded in San Francisco.

11. COMPLIMENT YOUR SOUL by Dan Croll (honorable mention FROM NOWHERE)

I bought tickets to the CHVRCHES show last March having never heard of the opener, Dan Croll. Opening acts at the Indie have been hit or miss for me, so I usually don't make an effort to catch the opener. But I'm glad I did this time, because there's something about this geeky looking British kid that really special. Oh, right. Talent. The word is talent.

10 a b c. I BELIEVE by Basic Vacation, PUMPIN BLOOD by Nonono, LITTLE GAMES by The Colourist

Every now and again I hear a song and on first listen I can't help but start to dance (awkwardly, usually in place, but dancing nonetheless). These three songs fit that bill. Happy, upbeat and totally dance-worthy.

9. WE CAN'T STOP by Miley Cyrus

I debated including this song because every time I say I like Miley Cyrus people think I'm joking. When I insist that I'm not, I get seriously judged and I start questioning my life choices. But, if I'm making an honest list of 2013 songs, this track has to be included. Forget the twerking. Forget the tongue wagging. Forget that it's Miley Cyrus. This song is catchy as hell, and sometimes that's all you need out of a song.

I've always been a sucker for that whole indie-band-covers-rapper genre of music.

This is an awesome summer song, also good for when it's freezing cold in the winter and you want to imagine yourself at a beach party, or anytime, really.

I heard this song for the first time during a Capital Cities show at Rickshaw and thought they were drunk. But then I realized, no, it's Capital Cities, and never question anything they do, because it's guaranteed to be good shit.

5. SAN FRANCISCO by The Mowgli's (honorable mention WAITING FOR THE DAWN)

I love this song so much that I'm willing to forgive the fact that they filmed the music video in LA.

4. COME A LITTLE CLOSER by Cage the Elephant

I try to avoid the radio, but I commute an hour to work and every morning I get my sports fix listening to Murph and Mac on KNBR. Since they play the 'Kars 4 Kids' commercial ad nauseum, I usually switch over to FM during commercials. And that's where I first heard this song. Within 30 seconds I was Shazaming it and the song has been in my head ever since.

Bad Blood is probably my favorite complete album of 2013. It's the kind of album that I want to listen to alone in a dark, snowed in cabin with a bottle of wine and a fire crackling. And that's a good thing. 'Pompeii' is the runaway hit of the album (deservedly), and I shouldn't have to tell anyone how great it is. So I chose 'Laura Palmer' because bonus points for anything David Lynch. Sidenote: Bastille has put out a couple of mixtapes that feature cover/mashups of old and current songs with movie lyrics. It's pretty much fantastic. Google "Other People's Heartache Part One and Two." "No Angels," featuring The xx's "Angels" and TLC's "No Scrubs" with lines from the movie 'Psycho' is a thing of beauty.

I first saw MS MR when they opened for CSS at Great American Music Hall, and the billing should have gone the other way. Thankfully it didn't, because CSS was so bad that my friend and I decided to leave early and ran into Lizzy and Max at the merch table on our way out. Those two were incredibly humble and gracious on stage, and just as much so off stage. I have seen them two more times since and they have yet to disappoint. 'Hurricane' is their radio hit, 'Bones' is a beautiful, haunting song. But then I saw them perform 'Dance Yrself Clean' at Outside Lands and my brain exploded. I have very strong sentimental ties to LCD Soudsystem's version and MS MR does a worthy stripped down cover.

Certain songs become anthems for a moment in time. Much like Martin Solveig's 'Hello' takes me back to a club in Cabo and 'Paradise City' instantly transports me to a summer day at Windsor Water Works, 'Rage' will forever be my song for 2013. I was introduced to it over the Fourth of July and I have pretty much listened to it on repeat ever since. Need to get through that last half mile of a run? Throw on 'Rage.' Hit a wall on a Friday afternoon at work? 'Rage.' Need some motivation to get out of your pajamas and off the couch on a Saturday night? 'Rage.' It is. Hands down. The greatest song ever recorded. Or, at the very least, the greatest song ever recorded that uses the f word, courtesy of Nick Swardson, repeatedly, and has a music video featuring super soakers and slurpees.
Posted by Aaron Bergstrom at 8:15 AM