[Guest List Week ventures up to Sacramento, for more dance party magic from Desa Warner! Desa is probably the only person who appreciates "Sunday Candy" as much as I do. Love that she got into the Demi Lovato deep cuts, and even that she ignored my (still correct) criticisms of Halsey.] 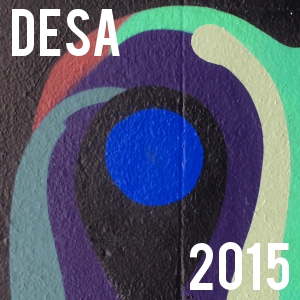 I’ve thought about this guest list all year. When I would hear a new song I’d think to myself – is this guest list worthy? My criteria are simple: each of the songs on this list has gotten stuck in my head at some point this year, resulting in me playing them obsessively on repeat. I tend to focus on the lyrics of songs, and the more clever or unusual the lyrics the more likely the song is to pique my interest. Also, I can’t pass up a good dance tune.

I discovered this song in early 2015 and it has traveled with me throughout the year. I added it to my snowboarding playlist in March when my husband Jared and I went out to Park City, UT. It was a go-to on my “Not Quite Dance Songs” playlist. I sang it in the shower and on my rides to work -- and I still like it. So, it gets the top slot.

Aaron posted a music video of this song on Facebook at the beginning of the summer and I was instantly hooked. It became a project song for me, meaning I played each verse over and over in the car until I could sing along with every lyric. I still get frustrated if I mess up a line, which forces me to start the song over so I can get it right. How can you not like this song? It’s about the guy’s grandma! Also, the line “You smell like light, gas, water, electricity, rent, “ is gold.

I’m not sure this is actually my third favorite song of the year, but it fits in nicely in the flow of the playlist. It’s sassy and has a good beat.

I have no idea what this song means but it is my latest binge-listen.

This is a sneaky addictive song. I think I heard it ten times before it really sunk in how cool and catchy it is. This song gave me all of its love and all that I need. (Ha! It’s a lyric…you’ll see).

I feel like songs that have the word “weekend” in them start a leg up from other songs. I hope this becomes your latest Friday afternoon, heading home after a long week anthem.

It’s a catchy dance song with some substance to the lyrics; my cup of tea. Favorite line: “At least you’re not a cigarette, that’s what I tell myself; Addicted to, your confidence…”

Oh Selena Gomez, this is not your first time on my guest list. I don’t care that you are dressing a little more skanky these days. I think you are adorable and I like so many of your happy, poppy songs.

I rebelled against this song at first but found myself humming it around the house. Eventually it won me over with its quirkiness.

I’ve been kinda into ghosts this year. My reality TV show guilty pleasure these days is The Haunting of … where they take the subjects of Celebrity Ghost Stories to the place of the haunting with Kim Russo, a psychic medium, to find answers about their paranormal experiences. This song is an extension of that… Listen at your own risk.

Feel free to dance around the house to this one. I’m totally with you in spirit.

I think my love for “I Love It!” has influenced this pick. Nonetheless, it stands on its own as a solid dance party song.

I don’t have a true country song on my list this year. Here’s the closest you’ll get from me country fans.

My favorite radio station is playing this song with reckless abandon right now. I’m a convert.

Try not to smile while listening to this song. Impossible!

I really hate the musical intro of this song. I would regularly skip it on my playlist until I realized that if I just made it through the first few boring, generic seconds I would be rewarded with a great toe-tapping song.

Although I am confused by the combination of the tribal beat/chanting, lyrics about castles, and the album image of a girl in a poncho, it’s an enjoyable little tune.

Jared is a Celtics fan and when Rajon Rondo was at his prime on that team, I had a celebrity crush on him. However, whenever he would talk on camera, a little bit of the crush diminished. So, I pretended Rondo’s voice sounded more like Travie McCoy’s voice and all was solved. Now, Rondo has moved to MY basketball team, the Sacramento Kings AND Travie McCoy has a new song with Sia all in the same year – coincidence???

It’s been the year of Ignition remixes – but this one’s my favorite.

I’m pregnant and haven’t had a drink since August 1st. The chorus, “Son of a bitch, give me a drink!” resonates.
Posted by Aaron Bergstrom at 8:51 AM