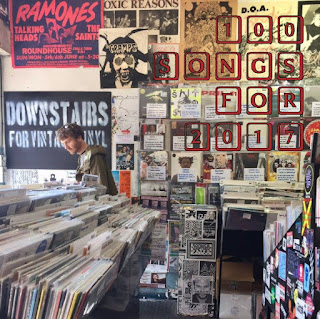 My 100 Songs for 2017 list comes out December 11! And, to be honest, it’s not even close to being finished. So, I guess a week from now we’ll both be surprised by what I think the best songs of the year are. Regardless, between now and then, we’re shining the spotlight on some deserving songs that didn’t make the cut.

Today, we mourn victims of the Two Song Rule. As long-time readers may remember (as none of you, in fact, remember), 100 Songs for 2008 featured five Los Campesinos! songs. And sure, Hold On Now, Youngster is a classic, but that is just too many songs by any one artist on a year-end list. So, eventually I realized the error of my ways and instituted the Two Song Rule, which is exactly what it sounds like. These artists just had too many good songs this year.

Haim - “Found It In Silence”

The first Haim single came out in 2012, and Days Are Gone came out in 2013, which isn’t really that long ago … but man it feels like a different lifetime. It seemed like Haim were content to embark on a new life as professional celebrities, on a permanent vacation with Taylor Swift and her army of models. And if they had, who could blame them? I think I’d mostly given up on the idea of another good Haim album, so with that background, 2017's Something to Tell You sounds even better.

I have no idea what Generationals are up to. They have so many new songs out that I got into a somewhat involved argument in a Portland bookstore about whether or not they actually put a proper album out this year. (They did not, just five singles.) Maybe they’re just a digital singles band now. There isn’t really a reason for artists to release traditional albums anymore, so who knows? Anyway, all five of those singles are varying degrees of great, and “Mythical” has the minor honor of being my third favorite.

Phoebe Bridgers - “Would You Rather”

You know when you’re watching a commercial and you see an actor who exists somewhere on the fringes of your memory and you spend the entire thirty seconds trying to figure out where you know him from and then eventually your wife figures out that it’s the guy who played Doug Hitler on Happy Endings and by that time the commercial is over and you didn’t catch whether you were supposed to buy a phone or a Lexus or what? That’s what Conor Oberst’s guest vocal on this song feels like.

Anyway, Stranger in the Alps is a great album.

Worriers - “Not Your Type”

Calling Worriers a slightly softer version of Against Me! might sound like faint praise, but Laura Jane Grace produced their previous album, so I think they’d still appreciate the compliment.

I have never said the name of this band to someone who didn’t think I was trying to say the word “warriors” but inexplicably failing.

Another band where I have no idea how you actually say their name. I come out somewhere in the neighborhood of Dracula saying the word “always,” which I'm sure is wrong.

Bummed that I missed their show at the Fillmore earlier this year (a) because they are great and I bet they put on a fantastic live show, and (b) because they might have started the show with a hearty “Hello, San Francisco, we are Alvvays!” and then I would know how to say it.

White Reaper have been touring pretty much non-stop for all of 2017, but for some reason they refuse to play San Francisco. But they did play CalJam. And if you don’t know what CalJam is, well, I didn’t either. Turns out it’s a one-day music festival near San Bernardino … which includes a water park. I know. You just realized every music festival you’ve ever been to was terrible because it didn’t have a water park.

I’m pretty sure I’ve had tickets to see Waxahatchee on three separate occasions, and I’ve never been able to go. I don’t really have a joke or a comment here, that just makes me really sad.

My Love is Cool came out in 2015, but I didn’t really listen to it until 2016. Since my only platform for expressing opinions is year-end lists, I don’t feel like I really got a chance to breathlessly describe how great it is. It’s really great.

Anyway, Wolf Alice is back in 2017 with Visions of a Life, and when 100 Songs for 2017 comes out we’ll talk about how great that is. For now, though … please go listen to My Love is Cool.

As far as I can tell, Pale Waves have three songs that they have released in any recorded format. Two of them are on 100 Songs for 2017. This is the third. I know it’s a small sample size, but with a batting average like that I think we have no choice but to agree that Pale Waves are the greatest band in the history of the world.

I know you have fifteen different holiday parties scheduled for December 9, and I know you’re already pulling your hair out trying to figure out if you should just pick one, or make an appearance at several, and if so in which order, and who you’ll offend if you don’t go to theirs, and …

Just skip it and see Alex Lahey at Bottom of the Hill with me. I promise it will be better than any of that.

MUNA - “Crying on the Bathroom Floor”

This is the most Robyn-sounding of MUNA’s songs (the verses especially) which always means you’ve come to the right place.

Literally no song should ever be more than seven minutes long, and if Japandroids keep messing with synths like this I’m pretty sure they will eventually slip over into Spinal Tap Jazz Odyssey level self-parody, and yet … it works.

Going to be Song of the Year on the greatest music website in the world, The Singles Jukebox, so that should be some consolation for Kesha here.

Cracking myself up imagining going back in time and finding 2009 Aaron right after he heard “Tik Tok” for the first time and telling him a day would come when he would be having a hard time deciding which two Kesha songs he should put on his year-end best-of list. We’ve come so far.

Posted by Aaron Bergstrom at 6:44 AM