My 100 Songs for 2017 list comes out December 11! It’s … maybe a little closer to being finished than it was yesterday. So, I guess a week from now we’ll both be surprised by what I think the best songs of the year are. Regardless, between now and then, we’re shining the spotlight on some deserving songs that didn’t make the cut.

So yeah, I’m not going to come in here screaming, “HEY! LISTEN TO ME! I DO NOT GET POST MALONE! LIKE, AT ALL! THIS IS AWFUL! WHY DOES ANYONE LIKE THIS?!?” I’m sure the kids have their reasons.

Instead, let’s talk about some pop songs I thought were pretty good.


This is maybe the most Avicii song ever written, even though Avicii himself wasn't involved. (Kygo is Norwegian, so maybe it's a pan-Scandinavian thing.)

Selena Gomez is great on this, which is something I found myself saying surprisingly often in 2017. Pop stardom is all about the long game, but it's amazing to me that I would be more excited about a new Selena Gomez song than I would be about a new Ellie Goulding song, or a new Lady Gaga song, or even a new Taylor Swift song (not that we didn't just get a bunch of those but, spoiler alert, none of them are going to be on 100 Songs for 2017).

Last point: There's a lyrical ambiguity here and I need to get to the bottom of it. The lines in question are "I had a dream / we were back to seventeen / summer nights and libertines / never growing up"

The word "libertines" is lower-case there, conveying the general definition of the word - free thinking, rebellious, existing outside the norms of society. And that fits, I guess.

Commenters on the lyric site Genius, though, think this is a reference to the band The Libertines: 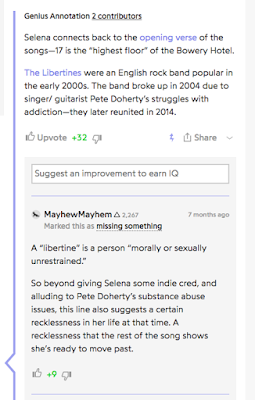 The Libertines (a) are one of my favorite bands of all time, and (b) have absolutely not been culturally relevant in any way since 2004.

If this song is about Selena Gomez and her friends sitting around listening to, like, "Can't Stand Me Now," it completely changes the way I feel about this song. If that's the case, it should absolutely be in my top 100.

The Wikipedia page for this song has a hundred and twenty-seven citations, and yet fails to address this.


NME's Song of the Year, and if you want a preview of my list ... there's going to be a lot of overlap with NME ("Green Light" notwithstanding).

I can't quite put my finger on why, but I think it would like it better if someone else did it.

Stereogum's Song of the Summer, which is high praise.


Those Snapchat videos where Khaled is lost at sea on a Jetski are still the best thing he's ever done, but this beat has to be in the conversation. Other great things about this song: Khaled's ad-libs (nothing new, but always a treat), whatever effect he put on Bieber's vocals. Cons include: pretty much the rest of it.

For the first forty-five seconds, this is one of my favorite songs of the year. The problem is that it's almost five minutes long. 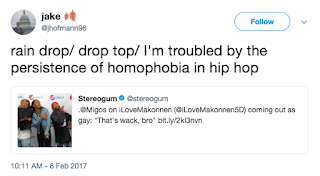 As you may have noticed, every single male public figure is a horrible monster. On that spectrum, Migos' homophobia is maybe a ways down the list, but it's still disappointing.

I'm not going to tell you how to process art made by terrible people, because I don't know myself (and, given the pace of news, I'm sure we will soon learn something terrible about one of the artists on 100 Songs for 2017). I just know it makes songs like this a lot less fun.


Despite the existence of a music video that suggests otherwise, I refuse to believe that Liam Payne and Quavo have ever met in real life.

Look at this obvious photoshop: 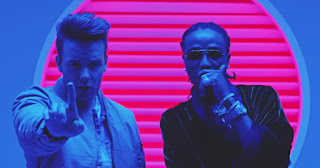 Nope, these two people live in different fictional universes. This is some kind of weird fan fiction where Harry Potter and Marlo from The Wire are friends.

Bleachers - “Hate That You Know Me”


Hot Take: This is better than any of the songs Jack Antonoff wrote for Reputation. And it has Carly Rae Jepsen on backing vocals. In the years between albums, we have to be thankful for whatever CRJ we can get.


This is a perfectly pleasant if ultimately forgettable song, but I put it on the list so I could bring your attention to the video, which is stunning. It takes places in a splashy Day-Glo town that I assumed had to be some kind of post-production visual effect: 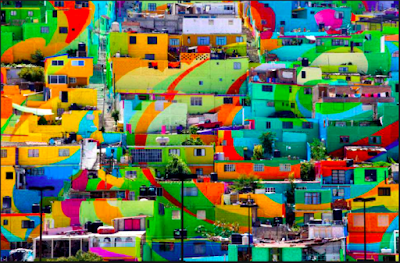 Nope, turns out this is a real place in Mexico. You can just go there and, I assume, ride unicorns as public transit. Maybe you're not interested in living inside a sixties acid trip cartoon but, I gotta say, I'm intrigued.

Like I said, I think I'm a Selena Gomez fan now. She's a good singer, and I don't really know what her contribution to the songwriting process is but, at the very least, she picks good songs. 2017 has really been a voyage of self-discovery.
Posted by Aaron Bergstrom at 9:07 AM