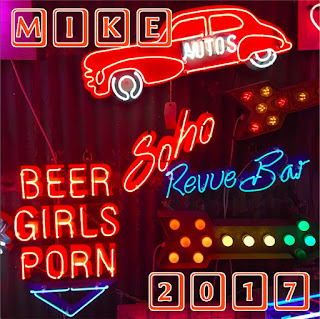 This list is pretty much just pop music, which means that it’s the best guest list. These songs are among the most fun this year. And yes, "Bon Appetit" is an underrated masterpiece.

How was this not the song of the summer? It has hooks, it’s dirty, the samples are fun, and yet it barely made a dent on the pop scene. To be fair “got me spread like a buffet” was later topped as the best lyric of the year by Tove Lo’s.

THANKS is made up of two former Alphabeat members. Their third single, "Your Man," sounds like a party from the opening notes and is everything you’d expect from THANKS’ lineage; it’s fun, playful and silly.

"Baby Who," The Aces

"Baby Who" could be mistaken for a b-side from Days Are Gone by Haim, but in a good way. It’s just a little more of what you love.

You’ve probably heard it, it’s a great song, not much for me to add here.

"Scared of the Dark," Steps

This is probably 2017’s best example of a pop band reforming and giving their fans EXACTLY what they wanted. It sounds just like something they would have released in their hey day. The only downside? No iconic dance like "5, 6, 7, 8."

This is a new category, but "Cut To The Feeling" is the best song of the year to listen right before an interview. I’d had three hours of sleep before mine with Spotify. One listen of "Cut To The Feeling," though, and I felt rested, optimistic and ready to go!

Its just a great hook.

Aussies love their throwback rock. "Runnin’ Outta Luck" is no different. It sounds like a modern version of Robert Palmer’s "Johnny and Mary."

This is the first song from Tremors on Spotify. It’s a great start and hopefully bodes well for more great releases from them.

Lyric of the year:

“I'm sweatin' from head to toe
I'm wet through all my clothes
I'm fully charged, nipples are hard
Ready to go”

"Strip that Down," Liam Payne

The stark intro with just a bass line, cheers of “hey”, and a few snaps perfectly matches the title of this song.
Posted by Aaron Bergstrom at 10:04 AM