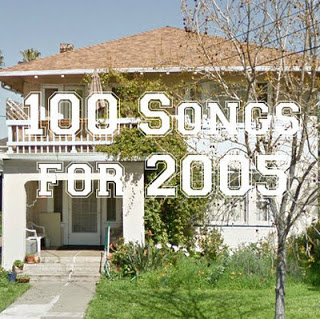 Mitch Hedberg was found dead in a hotel room in New Jersey.

And yet, as I've explained elsewhere, it was a singularly perfect, intensely personal musical year for me.

So here are my favorite songs of 2005. I spent so much time over the last two months putting this list together ... you would think less of me if you knew exactly how much.

Before we get to the songs, a quick Q&A on methodology:

Q: Are you sure this list includes everything you were listening to in 2005?
A: Pretty sure. I searched my iTunes by date, combed through playlists song-by-song, looked at the year-end lists at Pitchfork, Stylus, Rolling Stone, Spin, and Drowned in Sound. Again, I put a scary amount of time into this.

Q: Did you cheat for singles collections?
A: Yes. Both number 66 and number 99 were released as singles before 2005, but were included in 2005 compilations, and so made the list.

Q: What's up with Robyn's "Be Mine!"?
A: It will be the only song to appear on more than one 100 Songs list. I cheated and used the American release date to include it in 100 Songs for 2008. 2005 is its spiritual home, though, and this list wouldn't feel right without it.

Q: Did you really listen to this much ignorant hip hop in 2005?
A: And then some. If Mac Dre had survived 2004, this list would probably look a lot different.

Q: What is the lowest-ranked song on 100 Songs for 2005 that you could argue would have been Song of the Year in 2011?
A: I think Bright Eyes - "Light Pollution" at number 80 would have been a serious contender.

So ... who wants to live vicariously through the sonic minutiae of someone else's life?