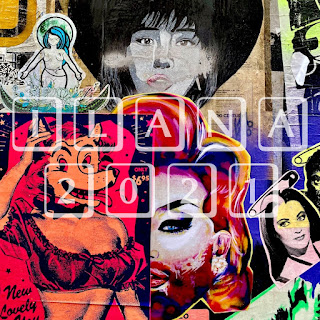 We pinned our hopes so high on this year, because certainly it was going to be - it HAD to be - better than the last. But when a crazed mob of Tr*mp supporters attacked the U.S. Capitol just six days into 2021, we had to have known that this was not going to be the magical year we desperately wanted. It was going to be something else.

Instead of trying to come up with my favorite songs of the year all at once in December, I usually start a playlist in January or February where I can add songs whenever I feel like they’re quality contenders. By early December I can whittle down the list to its final form and feel pretty confident that I didn’t miss anything. But now I’m realizing that I should probably write about the songs earlier in the year, too, because sitting down to write now (December 10) proves to be very difficult. The days are dark, the weather is terrible, we have a 5:00pm lockdown in Amsterdam because breakthrough COVID cases are raging, and everyone here knows how I feel about Christmas cheer, right? So this isn’t exactly me at my best, but I promise that [not all of] these songs will be total bummers.

What do you think is the most romantic song of all time? “Unchained Melody”, “Nothing Compares 2 U”, “Too Close” by Next? (See, sometimes I’m still funny when I’m dealing with Seasonal Affective Disorder!”) Well for me, add “Hug From a Dinosaur” to the list because if writing a loud, glam rock-inspired song about rushing to get your fiancée some lunch because she’s hangry isn’t the purest form of true love, I don’t know what to tell you. Crank it up and, if you’re single, get yourself a significant other who loves you the way Mackenzie loves Jenna.

MORE OF THIS, CHARLI, PLEASE! Literally, MORE! This song is about two minutes too short, which means I usually listen to it at least two or three times in a row because I love it so much. My other complaint is that it should’ve been released on October 1 (instead of Sept 2) à la Turn Off the Light, Vol. 1. Everything else - including the music video - is perfect.

I’m not proud of it, but I was slow to warm up to Ms. Rodrigo. “Drivers License” felt like an overnight American phenomenon that I missed while sleeping in Europe, and the next thing I knew, Music Twitter was positively gagging over her and there was a dedicated SNL sketch and everything. “Deja Vu” didn’t grab me upon first listen either, so by the time “good 4 u” dropped on May 14, I didn’t even think to play it. (Also my brain automatically associated it with Selena Gomez’s “Good For You” which is … a fine song.) But when Sour came out a week later and most of Music Twitter truly passed away with joy, I asked Aaron to put it on while I was cooking dinner. (More on that in Song #5 below.) Immediately thereafter, I couldn’t get enough of “good 4 u” and think it’s full of brilliant components: the super-fast drums that lead up to the first chorus, the lyrics in the bridge “Maybe I'm too emotional / Or maybe you never cared at all”, and most of all the screamed “Like a damn sociopath!” Pure teenage (and adult) angst, and I love it.

On January 8, 2021 I did something that I hadn’t done since *checks calendar* 1995: I bought a pair of Rollerblades. With gyms still closed and winter in full force, I was craving cardio exercise that didn’t involve me doing sad YouTube dance workouts in my kitchen or suffering through 5km runs in the cold. Fortunately inline skating is actually a popular sport in the Netherlands so I don’t look too out of place, but yes, I’d cycle to Vondelpark, change into my skates there, put my sneakers in my backpack, crank up the Bladin’ playlist, and do several laps listening to Donna Summer, Kiesza, and Agnes. While “24 Hours” sounds incredibly similar to her earlier single “Fingers Crossed”, it’s a great song for transporting myself to the imaginary, pre-pandemic dance floor of my dreams.

Back to my earlier reference in #3, I asked Aaron to put on Sour when I was cooking dinner the day the album came out. The moment the guitars of “brutal” started to play, I remember asking him, “Who is this?” He looked at me like I was a total dumb-dumb and said, “Olivia Rodrigo … you literally *just* asked me to put on Sour.” And that’s the moment I became a full-on Rodrighoe. I’ll teach you how to parallel park, Olivia! I’m really good at it!

See? 2021 is a huge year for Rollerblades! Also I love the electric guitar right before Phoebe’s verse.

I imagine that this song was written about a guy so arrogant and oblivious to nuance that he thinks that being its subject is a compliment. Drag him forever, Ellie.

The chord progression “duh nuh nuhhhh” (I’m available for interviews, Switched on Pop!) kills me. It’s so sad. It’s so perfect. This song is incredible.

I’ve been familiar with TORRES’ music for a couple of years now, but this first single off of the latest album Thirstier was the one that made me stop, pay attention, and fall in love. Who says ultimatums in relationships don’t work?

Aaah, ah-ah, C-I-T-Y … god this song is pure serotonin. Just imagine walking into the first (and only) big dance party you’ve been to since “The Before Times'' while this song is on. 100% one of the happiest moments I had in 2021, so dankjewel, DJ Tmorgz!

I’ve listened to this song so many times while doing half-assed arm workouts in my kitchen and I’m still not sick of it. Not even close. My shoulders, on the other hand, hate me.

Shout-out to Mama Ru(ssell Abdo) for introducing me to this under-the-radar banger. According to Fae’s Spotify bio, “someone once described my music as ‘kill your boyfriend’ pop. i will now be using this descriptor forever :)”

I’ve done a lot of crying this year, but nothing made me sob harder than reading Michelle Zauner’s memoir Crying in H Mart. At the same time, however, few songs felt more joyful than “Be Sweet” off her latest album, Jubilee. Highly recommend the book and album and emotional whiplash to every single one of you.

I want to put Heather Baron-Gracie in a room with Goldie Hawn, Bette Midler, and Diane Keaton and then just see what happens.

Sometimes you just want to listen to a really good, solid [Bruce] song, and these ladies deliver. I love it when a new song sounds like an instant classic.

Ah, a lovely ode to the scariest girl on the cheerleading team. Please produce everything in 2022, Sarah Tudzin!

Look, this song - while undeniably amazing - is 90 seconds too long. At first I can’t listen to it without turning into a puddle of emotions (I’ve got two ears and a heart, don’t I? Ooof, Jack Donaghy jokes sure hit differently these days), but by the time we get to the redundant outro I’m back to rolling my eyes at the schmaltz and very much ready for it to be over. Why didn’t Taylor edit it down a bit? I have two guesses: 1) the “8.5 Minute Version” is a less exciting subtitle, or, more likely, 2) Taylor just wanted to out-last “Konstantine”, the 9 minute 36 seconds emo ballad-marathon of my college years.

Congrats to Bruce, I mean Jack Antonoff for being the first dude lead singer to make it on my list! The musicality is so full and cheerful, and it makes me think that the band had such a good time recording this song.

It’s unfortunate that a song as fun as this is about an evil overlord who’s destroying the planet, isn’t it?

There are three ways to become a Dutch national: 1) Automatically at birth, 2) through the “option” procedure, or 3) through the “naturalization” procedure which, in part, requires you to start listening to Eurovision songs for fun. Congrats to the ridiculously hot Italians who won this year, but here are MY top three Eurovision Song Contest tracks from 2021:

When Lithuania kicked off the first night of the semifinals with “Discoteque” I recognized something different about myself. It's taking over me, it's slowly kicking in. I could look past the pageantry, the wacky costumes, and distracting choreography and finally just … enjoy it. For real. The friends who watched the debut performance with me laughed them off, but I knew better. (Of course I did.) THE ROOP was entirely under-appreciated by only getting eighth place.

Although I’ve never considered myself a fan of Linkin Park or Limp Bizkit or the like, in a year where I felt utterly starved for live music (yes, I went to a grand total of TWO concerts, on back-to-back nights in September), I was thrilled the first time I heard the LOUDNESS of Finland’s post-hardcore submission “Dark Side” which finished in sixth place. Oh my god I missed the guitars, the maximalism, even the pyrotechnics. Self-described “violent pop” band Blind Channel makes me want to brave the Finnish darkness and see a nu metal concert (or the Air Guitar World Championships) ASAP.

“Fallen Angel” may have finished in 18th place, but it’s the first in my heart when it comes to Best Key Changes of 2021. Euro-emo pop at its cheesiest and I’M-A I’M-A LOVE IT.

See you next year in Turin, everybody!

Posted by Aaron Bergstrom at 2:04 AM