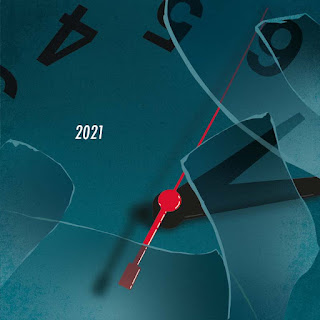 It’s been a weird year to say the least. I’m not sure about everyone else, but time means nothing to me anymore. 2021 seemed to pass by in the blink of an eye. And yet in a lot of ways this year feels like it’s lasted so long. After things started opening up again at the beginning of the year, I left Amsterdam to spend a month in Tenerife. And then a month in the US. I also went to Malta, Greece and Sweden. I think I did more traveling this year than I’ve ever done. But I somehow still feel so trapped by this house and this city. And as we head into another lockdown, it’s so easy to feel down. But taking the time to reflect on the positive points from the last year (and there were so many) reminds me that there are more “Good Days” than bad ones.

An absolute masterpiece of music and perfect follow up to my favourite album of 2017, ctrl. She gets featured in big songs and writes for huge artists, but her solo stuff is always my favourite.

To be honest, I had never heard of Zoe Week before I heard MUNA’s remix of this song. The original version of the song is cute but MUNA put their spin on it and made it great. Let’s be honest, MUNA is the real star of this track.

Zara Larsson isn’t really an artist I seek out, she just comes into my life every now and again. I didn’t even realise she had released an album this year (also didn’t listen to all of it). But this song found it’s way to me somehow and it hasn’t failed to get me dancing.

Clearly the song of the year - I’ve seen it on pretty much everyone’s list so far and for good reason. I wanna say “more of this”, but she’s giving a lot of the same song lately and I would like some variety from her. Just the same quality.

Also back is one of my favourite pop-punk artists from the 2000’s , Aussie twins the Veronicas. Actually they never really went away. They actually never stopped making music, and their style has stayed pretty consistent. Go back and listen to “Untouched”, it still slaps (I think that’s how the kids say it these days).

I’m going to start a list of artists I never expected to have on my end-of-year playlist. Jessie J? Really? Was never a fan but holy shit this song is great. Disco vibes, 80’s synths and beats. Are you listening, Jessie? Only this from now on.

Next on that list is Demi Lovato. Who told these annoying artists that it was ok to make such great music? At least in this case it’s because this remix is so fire. More 80’s vibes! I love it!

If you don’t know her already, pay attention. She just won ‘Rising Star’ at the 2021 Brit Awards. Super cute, super talented, and only 20. Check her out, and start with this song.

I can’t really defend this selection. I listened to it a lot this year though, and couldn’t leave it off the list. It’s the only song by the artist worth listening to, but something about it gets me going. I’m interested to know if anyone else likes it too.

“He Said She Said” - CHVRCHES

CHVRCHES’ album Screen Violence was one of my favourite releases this year (Ilana & Aaron, did you come around yet?). All 80’s inspired like all the best music was this year. Insightful lyrics. Apparently inspired by horror movies.

Korean-American R&B / Rap artist? Yes Please. Maybe not for everyone, but I love it.

I will not elaborate.

Happy beat, terribly sad lyrics. Still, I had it on repeat while driving around in Tenerife in March. Must be why it was my most played song of the year according to Spotify.

Shay sent me this song this summer and I was obsessed. Only two songs on Spotify as of today. Shay, how did you find this girl?

Allie X really is a perfect pop artist. And I’m really getting lazy with writing this. Does anyone actually read these?

Another song improved by MUNA.

To be honest, I put a LOT of work into organising these songs. And the most important part of any story is the ending. We’re winding down now.

Posted by Aaron Bergstrom at 12:15 AM