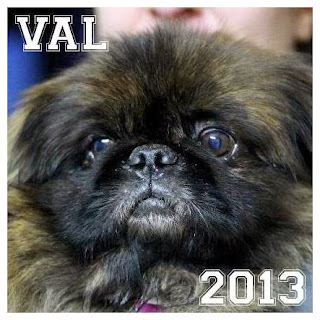 [Guest List Week III rolls along with Family Dog Rescue's own Valerie Lo! From San Francisco to Hawaii to a hypothetical Ohio of the mind, from late nights dancing in bars to early mornings running in the park, here's Val's sonic travelogue for 2013.]

It was June, it was unusually cold, even for SF. It was summer but I found myself unable to leave the house with out a sweater (read hoodie) or two. This song reminds me of Ocean Beach on cold, misty, grey afternoons and then doing some serious making out on a couch...Not that I did much of either, the song just evoked these kinds of images.

After Angry Asian Man directed me to the link for the video, I waited patiently for months for this track to drop. This song is sick on so many levels. Rocky Rivera is fierce and hip-hop Asian American style is incomparable.

My happy song of summer. Mornings, afternoons, evenings running in the park, along the beach, through the city. Yep, it's hipster. It's almost annoying with it's super poppy highs, but it makes you go fast, that's for sure!

Not sure what it is about this song but it does something to me. Something about her (wait…HIS???) sultry voice and the smooth beats. I also kinda get it, I think. Early evenings in summer, the sun about to go down, the city sky every shade of orange and pink…a glass of wine on the patio.

Strangely, I never get tired of this song. Jay Z has some serious skills and somehow Justin Timberlake is even tolerable.

So sweet and light! Catchy! Yummy? Yuna reminds me of all my favorite female vocalists like Lily Bee and Zee Avi, and anyone who sings songs about how new love and crushes can be so 1950s.

This song makes me wanna dance. Preferably, at night, on O'ahu, in front of Aloha tower with ten best friends. It is my happy driving song and one of my upbeat shadowboxing songs. Passion Pit on super happy pills? Please, someone, take me dancing!

Sigh. I waited for so long to have someone deserving of the lyrics of this song. Plus, I love almost everything Jack Johnson writes, sings, plays. And, no other artist can immediately transport me to O'ahu's North Shore the way he can.

Just try to listen to this and not move faster! First thing in the morning, running though the Panhandle as the city wakes up and all I can think about is how I'm so in love with the city and views and life that I can't stop!

"I am secretly in love with everyone I grew up with…."  The National reminds me of Ohio, a place that only exists in stories that my friends tell me. When I hear The National, I feel both broken and redeemed. Their music makes me feel sick with despair. It is always winter. It is always grey. Life hurts but you somehow made it through another day and hopefully a beer or two await your arrival home. But, there is also something so beautiful, so heartbreakingly honest. We all have demons. We all put on our game face and try to get through the daylight hours. We hideaway and when we do go out, well... "When I walk into a room, I do not light it up." "Fuck."

I saw a preview for The Spectacular Now and I developed a small obsession. Since I don't go to movies alone, I bought the book and spent a few late nights with my iPad immersed in the life of Sutter Keely. I too live in a spectacular now. I wake up before the world and watch the city wake up. While not a teenage alcoholic, I know how it feels to want to live my life to the fullest right now even if it breaks me. Like Cheryl Strayed advises on what to do with your life, "…tackle the motherfucking shit out of it." But back to the song. It's kinda sexy and sweet and jazzy with some R&B and funk. It makes me think of walking down a quiet road on a late summer evening with a girl that I have been crushing on for months and maybe, if I can get up the courage, we'll end up holding hands…

Everyone has a Lorde song this year! She's got the voice and talent to burn. She has a Chinese boyfriend and doesn't think American pop stars are hot. She stands up for herself and her man. She's a good one. And, while I liked "Royals" and "Team" was pretty sweet (love how she is so tired of the party scene at 17!). There is something about this song that keeps it on repeat for me. I love how she fears getting old, at 17! There are elements of suburban ennui, there are best friends, and driving through the streets late at night, it's kinda lame and you might bicker with your friends but you can't wait to do it again next Friday night. And who doesn't cherish those moments when you laugh so hard your ribs get sore!

If a song was a tiny fragile thing that I had to hold close, but not too tight, to keep from breaking, this would be it. It's a big, wild, consuming love, but it, like life, is fleeting. It's like you want to give everything, every little part of yourself to someone, but the path is rough and long and you love them too much to take them along.

First, I love The Great Gatsby. It is one of the very few pieces of American literature that I never get tired of reading. The slight, spare book is a masterpiece. And, I love Lana Del Rey. Her voice and many of her songs remind me of a sick kind of longing for someone that you will have but who will break you in the process. I too know the feeling of desire, of aching for someone who will return but whose stay will be far too short. Myrtle, Tom, Daisy, Gatsby. All of them were cowards. In the end, souls ached, hearts were broken, two were dead, and all because no one could get past their own sick desires, their greed, their pride. It was summer in New York, it was hotter than hell. It was summertime sadness and sickness. And for just a moment, it was grand.


2. Disclosure featuring Sam Smith - "Latch"
Okay, so this is one of those combos that is almost magical in that mediocrity + pretty darn good come together to make my heart beat out my chest. Disclosure is an overrated electronic dance music-producing duo who have a few sweet sounds amongst a whole bunch of slightly above average mixes. They are B- music makers. Sam Smith is an emerging talent. I know people almost die when they hear his solo stuff, but sadly, it gets a 3.5 start rating from me. However, together, together they soar! Really, the lyrics could be a ballad. Really, they say everything I would say (backed by some electro-pop infused beats). This is the Castro on a warm Friday night, this is happy gay bar music, this is girls in suspenders and boys in short shorts. This is rainbows and lights and summertime.

This is both guilty pleasure and pure genius. This song lifts me up while making me feel like a slightly socially inept teen. It makes me think of the 80s (Back to the Future…2!) and 1950s news reporting. It's got awkward kids, nerds, sexy girls, Buddy Holly glasses, a horn section, beats, the fantastic and the mundane. Simply put, it's good shit. Period.
Posted by Aaron Bergstrom at 6:56 AM