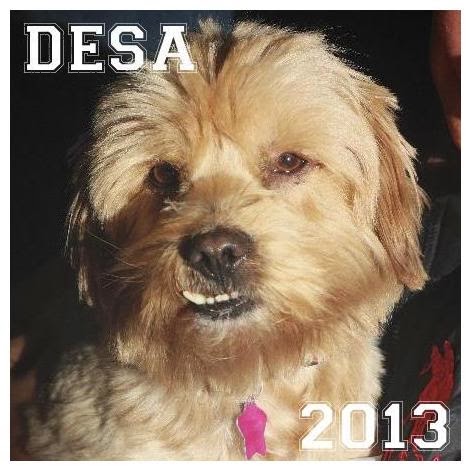 [It's Guest List Week IV! We made it! Two Guest Lists left, and they're both wonderful. We start with Desa Warner, who absolutely knows how to throw a dance party. Desa, stop trying to cause tension between me and Haim. It will never work.]

I don’t have a lot of insight into the technical or artistic merits of music. The value of music to me lies in its danceability, with in-the-car-sing-worthiness as a close second. Unlike my fellow guest bloggers, I am not typically a music hunter. So, this list might not have been possible but for the rigorous song discovery and vetting process my now-husband Jared and I went through to select our wedding playlist. Each song that made it on our wedding list was tested by living room dance party. And although not each song on my top 13 for 2013 made it to wedding playlist infamy, they made it on the exclusive list of songs I play obsessively whenever I get the chance.

Selena Gomez’ “Come and Get it” tops my list for 2013. It’s a can’t help but dance to song with an indulgent pop chorus and electro-Bollywood beat. Immediately upon hearing it on the radio for the first time, it became my guilty pleasure. Its status was soon elevated when Jared announced early on in our first living room dance-a-thon that, against all odds, he liked it too. So this song became a dance party staple. It played repeatedly at my bachelorette party while all my best girlfriends sang and bravely attempted to dance while holding on to the ceiling rails of a swerving party bus. And I remember when it began to play at the wedding and I heard Jared stop mid-conversation with a guest and say, “Hang on a minute, I want to dance this song with my wife.”

Thank you Selena, apparently we were ready and so we came and got it.

It’s cheating putting this song on my list seeing as how I only know of it because of Aaron’s Top 100. But it’s so good and within days of the Top 100 release, I had played it ad nauseam. Also, I think Haim would appreciate being on my list despite my late in the year discovery because I have it ranked #2 while Aaron has it all the way down at #8. Ha!


My conversation with Jared when sixteen-year-old Voice contestant Jacquie Lee hit the last long high note at the end of an incredible rendition of Nina Simone’s classic “I Put a Spell on You”:

Me: Wow! I don't think I could hit that note.

Jared: Which one? Any of them?

This song makes me feel like a happy drunk.

I think this song has an empathetic power. Despite the fact I have had the most joy-filled year of my life, upon hearing this song, with its quiet lyrics and simple piano accompaniment, I can instantly channel the intimate emotion of a couple just on the verge of an inevitable break up. Great big feat for A Great Big World.

I, too, discovered Lorde through the song “Royals.” And yes, I have played “Royals” more times than “The Love Club.” But this song is also great and maybe, just maybe, you haven’t heard it yet.

“Better Dig Two” was The Band Perry’s second big hit after “If I Die Young.” Both songs track the band’s dark side which is left-of-center in country circles. I think it’s catchy. The lyrics are clever, upbeat, and just a little demented.

Not sure too many of these lists have a country song followed by a Drop City Yacht Club song, but what the heck. This song plays well at both living room dance parties and car sing-a-longs.

Lady Gaga (who sounds a lot like Christina Aguilera in this song) and R.Kelly? Sounds like a club jam worthy of the wedding list – too bad it came out too late. I am sure there are dance parties in my future where this will get its well-deserved playtime.

Very rarely do I hear a song on the radio that I like instantly. I like to hear them over a few times until I know the words before I commit to an iTunes purchase. But “I’m Alive” was just so easy to listen to and life affirming that I bought it as soon as I parked my car.

I discovered this song on Aaron’s contender’s list. I like Janelle Monae’s wacky artistry and style combined with an accessible dance beat. Plus, I really like dance songs that actually have the word “dance” in them.

A loopy little gem from Fiona Apple which pleasantly reminds me of the old Willy Wonka & the Chocolate Factory movie and sort of creeps me out at the same time. The juxtaposition won this song a spot on my list.

My bridal party walked down the aisle to this song. It makes me happy.
Posted by Aaron Bergstrom at 10:45 AM