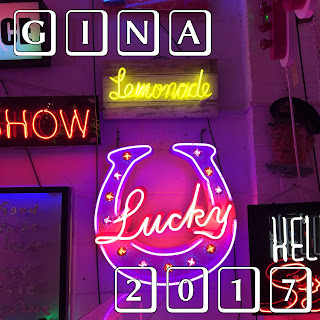 As a rule, I like upbeat, happy, danceable music. I relegate all "slow" songs to a playlist on Spotify that I pretty much only listen to in an Ambien fog when I am trying to fall asleep on an airplane. Otherwise, I go for music that makes me want to sing (off-key) or dance (awkwardly). If I’m in a bad mood, I want a song to uplift me. And if I’m already feeling good, I want a song to make me feel even better.

As I reflect on my favorite songs from 2017, I see more than ever that they skew towards the toe tappers and sing-along anthems. Maybe that’s because I needed it. Maybe we all need it. Even when things were good this year, the overall mood felt like there was a river of psychomagnotheric slime running through the earth’s core feeding off all the negative energy. And I've seen Ghostbusters enough times to know that the best way to combat that is to counteract it with positive energy.

So here are the tunes that brought me joy this year. My small way of putting a little more positivity out into the universe.

1. "Don’t Take the Money" by Bleachers
Most Played Song on Spotify This Year

While some criticize Bleachers for being over the top, over produced, over saccharine…like Goldilocks looking for the perfect chair to rest her feet, I find it to be just right. Bleachers music is over the top but in the best possible way – and "Don’t Take the Money" is the most Bleacher-y song of 2017. According to Spotify, it’s also the song I listened to the most this year.

Every so often there is a special song that I hear and become instantly obsessed with. I listen to it over and over and over…and in extreme cases, annoy my neighbors by playing it loudly on repeat until 3am. That song for 2017 was "Cold Little Heart." It started when I binged watched Big Little Lies in one sitting and culminated with a solo dance party on a Vegas balcony.

3. "I Know a Place" by MUNA
Best Song I Almost Went the Whole Year Without

You know the classic Girl-Removes-Glasses-And-Is-Suddenly-Beautiful 90s teen movie trope? That is this song for me. It was right there in front of me all year long (this song is on multiple friend’s playlists…MUNA performed at Outside Lands…), but it wasn’t until Aaron "removed the glasses" and put it on his year-end list that I finally took notice. At least I’m making up for lost time. I Know a Place has been stuck in my head since first listen, is now in heavy rotation on Spotify and I’ll likely be annoying my neighbors with 3am dance parties in the very near future. Thank you, Aaron, for making sure I didn’t go through all of 2017 without this song in my life.

4. "Cut to the Feeling" by Carly Rae Jepsen
Year’s Most Perfect Pop Song

Did anyone else watch Siesta Key on MTV? No? Just me? Okay, moving on…

"Cut to the Feeling" is perfect in pretty much every possible way. It makes you wonder what other gems are hidden amongst the allegedly 250-plus songs that also didn’t make it on to Emotion or Emotion Side B.

5. "Coloring Outside the Lines" by MisterWives
Best Live Out Loud Song

"When Big colors, he rarely stays inside the lines." – Carrie Bradshaw

This is a song best listened to at a high volume. It evokes Whitney Houston’s "I Wanna Dance With Somebody" and, appropriately, makes you want to dance with somebody.

Picking a favorite song off Melodrama is like picking out an ice cream flavor: it depends on what you’re in the mood for and there’s no bad option. For me, it’s "Green Light" – or "The Louvre" or "Homemade Dynamite" or "Perfect Places" – depending on the day. Today it’s "Green Light." I think.

7. "Love You Like That" by Dagny
Favorite Travel Song

This song showed up on a friend’s playlist while I was traveling this past fall and it was kismet. An international flight and a lot of down time traversing across a foreign country meant a lot of time spent listening to music. And every time this song came on I perked up and forgot that I was on the road (or in the air) again.

8. "Get It Right" by Diplo featuring MØ
Song I Most Want to Hear at a Music Festival

Meet me at Twin Peaks or the Sahara Tent. I’ll be the one with the LED silver pom-pon.

People love to hate on Taylor Swift. And she gets blamed for a lot of things that may or may not be her fault. Like ruining the San Francisco Giants franchise (Taylor released albums in the fall of 2010, 12 and 14, the same years the Giants won the World Series. She failed to produce an album in 2016, effectively killing the "even year magic.") In the spirit of Christmas, I've decided to bury the hatchet and stop blaming Taylor for the Giants’ woes.

Back then, they didn't tweet, they'd read the papers / Talk to friends right to their faces / Didn't Snapchat, they just chit chat / Yeah, let's have a think about that - "93"

Never mind that it’s his parents informing him on the simplicity of the 90s.

12. "Party Down" by Freedom Fry
Best Reminder to Stop and Smell the Roses

You probably heard Freedom Fry’s song "Awake" on a car commercial. Or was it Apple? Or Target? Regardless, it’s the best use of a ukulele this year and my second-most played song on Spotify for 2017. I love "Awake," but I feel like a few years from now it’s "Party Down" – a song about appreciating the good times – that I’ll still be dancing to.

This is a tie because I couldn’t decide which line I liked more: "I'm hella obsessed with your face" ("ILYSB") or "Always on my mind all the fucking time it’s you" ("You").

15. "Scared to be Lonely" by Dua Lipa
Best Consolation Prize

Since my three favorite songs on Dua Lipa’s self-titled album are all technically singles from 2015/16 ("Be the One," "Blow Your Mind (Mwah)" and "Hotter Than Hell"), I’m choosing a single that was actually released in 2017: "Scared to be Lonely." "New Rules" would probably surpass all the above except it got overplayed this year, which sometimes doesn’t bother me, but in this case knocked it down a peg (or four).

"Coasts" is British for "insanely catchy hooks." The entire album, This Life, Vol. 1, is full of danceable, beachy indie-pop that reels you in. The prize catch, "Heart Starts Beating," is smooth, heartfelt and most of all, hopeful.

Christina got dirrty, Miley came in like a wrecking ball and Justin caused a wardrobe malfunction. It’s always interesting to watch Disney stars bust out of their Mickey Mouse ears and I’m quite enjoying Selena’s transformation.

"Look, you're the one who's still hung up here. I'm telling you, I'm over it. I guess it's just not as big a deal to me as it is to you. Yeah, so we're not getting married. It's okay by me. I mean you're the one who proposed in the first place." – Luke, Gilmore Girls

Luke was so not cool with the breakup.

19. "Sit Next to Me" by Foster the People
Best Song Off a Disappointing Album

Oh look, another bright, uplifting, danceable song with a catchy hook. These tunes are like catnip to me.

"'It's not loud enough, turn it up,' means be heard, raise your voice, don't become complacent. It's not normal what's happening right now and we must remind ourselves and others of this."​​​​​​​ – Chris Glover (Penguin Prison)

A handful of years ago I attempted to celebrate my birthday with a St. Lucia show on July 26, a Giants game on July 27, a party (the 2012 Olympics-inspired AlcohOlympics) on July 28 and a Penguin Prison show on July 29. I say attempted because I never made it to the Penguin Prison show (TIL: black jello shots and bacon beer do not mix). Sadly, Penguin Prison will forever be inextricably linked to one of the worst hangovers of my life. So even if this song makes my stomach churn a little, it’s worth it.

21. "One Foot" by Walk the Moon
Soundtrack for My Next Walkabout

I’m a bad sleeper when I camp. So rather than toss and turn, one of my favorite things to do is get up early and go on a solo walkabout. I just set off, no destination in mind, exploring the area. At Crater Lake in Oregon I discovered a trail along a babbling creek, on Mt. Tam I found a hidden waterfall and in Tahoe I made my way to a boulder perched on the lake. There’s something exciting about exploring an unknown area, without anyone else around, and having no idea what’s around the bend.

22. "Despacito" by Justin Bieber, Luis Fonsi and Daddy Yankee
Most Ubiquitous Song of 2017

One of the funnier evenings of the past year was spent on a summer night in a mostly deserted Union Square mixed-use office building keeping my friend company while she finished cleaning out an office space. We spun around on Herman Miller chairs, played Pictionary on dry erase walls, drank wine out of logo branded cups and sang "Despacito" at the top of our lungs. Chances are, when you think back on 2017, you have a "Despacito"-soaked memory as well.
Posted by Aaron Bergstrom at 9:45 AM