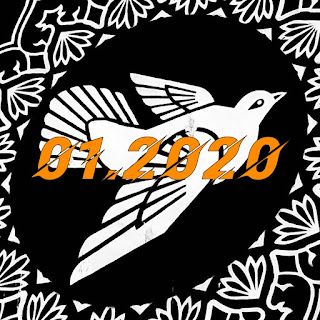 
It's been a month, and there are so many great new songs, so let's talk about them!

For me, a monthly mix is almost harder than a yearly retrospective, since in some cases we're talking about songs that came out days (if not hours) ago, and sometimes it's tough to form an opinion in such a short time. (For instance, "Physical" isn't on the list this month. It didn't really grab me on the first couple listens. By this time next month I could be telling you it's the song of the year. I have no idea.)

Phoebe Bridgers is now a genre unto herself. If she has any involvement in a project, it is guaranteed to be worth your time, and "Enough For Now" is no exception. That said, Gruska deserves his share of credit as well. The fact that he can sing lyrics like:

and make them sound comforting is what makes this song so special.

After years spent moving in a more transgressive direction both lyrically ("Love It If We Made It") and sonically ("People"), The 1975 return with a straight-ahead pop song whose lyrics could be the plot to a sappy rom com. And yet it's still great.

Also, please come to this awesome mini-festival with us in July: 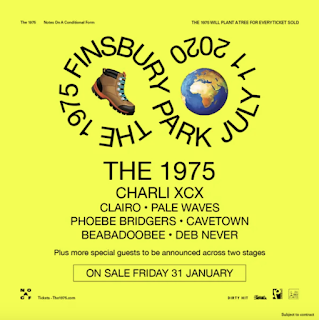 Look, you know me. You know I wouldn't say something like "Imagine if Charli XCX wrote 'I Know a Place'" unless I really meant it.

The guitars at 0:58 are the best thing that has happened so far this year.

Somehow living up to the greatness of this Tweet: 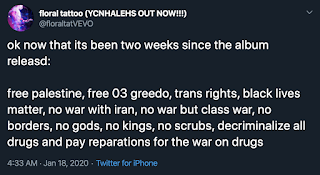 Also, the fact that Los Campesinos! is such an obvious influence for so many young bands makes me feel both very old and very proud.

Pretty surprised this was not the best song called "she" released this month.

I had never heard of L Devine before this year. I missed the meeting where we apparently decided that she has to be on every single "Artists to Watch in 2020" list.

That said, I get it.

This is a J Hus song on J Hus' album, and yet Koffee raps both verses while J Hus just handles the fairly minimal chorus. Seems like a strange decision on his part to take such a supporting role in his own song, but it works.

With most artists, I want innovation, experimentation, growth, etc. With La Roux, it turns out I just want her to make exactly this song over and over.

Twenty-two year old genius manages to incorporate basically every late-90s alt-rock hit into one song, despite most of those songs coming out before she was born. I truly believed I was the only person in the world who still remembered "High" by Feeder, and yet:

Vikram Joseph: Nostalgia is a hallucinogen; it blurs the distinction between times you miss and times you simply happen to remember more vividly than others, and, more disconcertingly, between places you have been and places that have only ever existed in your internal world. There’s something about “Circle The Drain” – with its soft golden hour hues, its fuzzy edges – that drives deep into whichever ganglion or cortex is responsible for nostalgia, and sends uncoordinated sparks and signals across its synapses, triggering a slideshow of fragmented memories that may or may not be memories at all. It reminds me of so many tangible things – the late 90s / early 00s guitar-pop of Natalie Imbruglia and Avril Lavigne, the Smashing Pumpkins’ “Today”, and (strangest of all) second-tier Brit indie band Feeder’s tender teenage stoner anthem “High” – but also of so much that is unreachable and unnameable – walks home from nowhere, composite daydreams from a hundred train windows, summers disintegrating into the building blocks of memory. As if getting older isn’t frightening enough, if I have this much capacity for nostalgia at just past 30 won’t I be slowly crushed under its weight by 70? But for now, while I can still think of myself as young, I’m grateful for this song – a gorgeous, dreamy downer – and for the synthesis of new memories from the glowing rubble of ones that came before.
[9]

First single from an upcoming album called Saint Cloud, which, given that Katie Crutchfield is from Alabama, is almost definitely a reference to Saint Cloud, Florida, and not the Minnesota exurb where I went to college. Probably a good choice on her part.

I really like this, but if it kept Ellie away from making the new Wolf Alice record for even five minutes, it wasn't worth it.

Learning fascinating things about the alternate history of pop music:

The possibility of a Hayley Williams solo album has been on the horizon since the very beginning. In 2003, the 14-year-old Williams was signed as a solo artist to Atlantic Records, which envisioned her as a Top 40 pop singer, à la Avril Lavigne. She insisted on being in an alternative rock band. She won. And so, alongside the rest of Paramore, she wrote empowering anthems for misanthropic teens to mosh and rip their tights to.

Of all the weird things Julia's man does in this song, the one that always sticks in my head is "He keeps talking about New Jersey!"

Am I going to talk myself into going to Utrecht alone to see these guys next month? Probably. (Really the only thing holding me back is that apparently they don't play anything from EXPO 86, which is a shame.)

We'll be in Africa, but they are playing Den Haag on February 15 if you hear this and instantly fall in love with them.

As we've learned, the quickest way to Maeve Wiley's heart.

Fourth artist in a row with an upcoming concert to mention: if you don't feel like going to that Twin Peaks show, maybe go see Georgia at Paradiso. Please keep up our concert-going pace while we are on holiday.

There are some cringeworthy lines in here ("Every time you see me / It's like winning big in Reno / Don't fuck with me, hoe / Take you down like judo"), but if there was some way to wager on a song becoming a massive hit, I would put some cash down on this one.

In the St. Vincent tradition of completely reimagining your old songs, this one originally came out in 2013 and sounded nothing like this. (This is Jake Clemons from the E Street Band on saxophone, keeping up his dad's tradition of randomly showing up on great pop songs.)

Not just the best thing about underwhelming Kanye projects anymore!

Which do you like better: "graceful pop for a graceless world" or "calming music for anxious times"?

Frequent readers of this blog will remember that Carl was all in on her back in 2018. If you're coming to her a little late, like I am, let me assure you there is still time.

For the subset of people who (a) read this blog, (b) obsess about the lyrics to pop songs, and (c) grew up spending way too much time at church, do you think this lyric:

"According to John / Fear softens into doubt"

"There is no fear in love; but perfect love casteth out fear: because fear hath torment. He that feareth is not made perfect in love."

Genius.com thinks so, but they are pretty consistently wrong about everything.

Anyway, that's a really good like, wherever it comes from.

If, like me, you're bummed out that Mitski has announced she's taking some time off, might I suggest TORRES?

I did not expect to be listening to this much country music at this point in my life. A pleasant surprise.

It remains true that Worriers have never made a bad song.

Do you understand Tik Tok? Me neither.

First paragraph of the Pitchfork review references both Phoebe Bridgers and Jens Lekman, and if you can imagine what a synthesis of those two would sound like, you're pretty close.

If you're looking for a fun topic for your moral philosophy thesis, let me suggest: "There's no such thing as truth / And you don't need to be a dick about it"

The Wisconsin renaissance continues. Following in the footsteps of Carlie Hanson, this is now two really good songs by people from towns I played sports against in high school (hello Viroqua!).

A dozen albums into his career, it seems like this is finally Dan Bejar's moment.

Twin Peaks are the only band to get two songs on the January list, which is a high honor for a band I didn't know existed two weeks ago. If you think the Rolling Stones were at their best when they were trying to make country music, you will love Twin Peaks.

Do you think Pearl Jam has wanted to be Talking Heads this whole time, or is this a recent development?

Actually a December 2019 release, but if you're like me and you get your Ukrainian pop weirdness on a delay, you'll forgive its inclusion here. I just feel like people should hear it.

Every Chromatics song is the soundtrack to a slightly shinier life than the one you are currently living.
Posted by Aaron Bergstrom at 3:07 AM