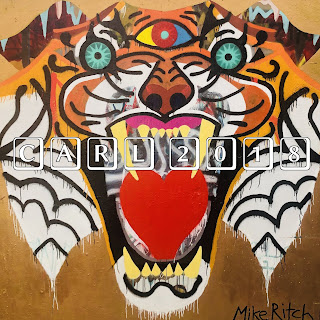 This year I did not listen to a lot of new music.  Without intention, I spent time listening to older music, and in particular albums (really can’t explain that).  So I don’t have much to say about the year in music, except that there were really excellent albums from Lucy Dacus and Caroline Rose that you should listen to.

I have very similar tastes to Aaron, so it was easier for me to do a kind of supplemental list, a list of things I wish he had on his list so that everyone would listen to them.  But then, in support of Aaron’s tenderpunk manifesto, especially in light of the continuing need to listen to women, there are some tracks just so damn good I needed to add ‘em.

Part I:  Tracks You (Even You, Aaron) Should Listen To

When I first heard this, I was immediately captivated by the first verse.  Totally did not recognize this as a remake.  When I heard the chorus, my jaw dropped.  Nothing was more inspiring this year than listening to this.  Let’s be clear, the original single was nothing, a half-assed attempt at a cliche.  Zero political resonance.  (Apparently it was huge in Canada, where maybe it lives on).  For Cousins to see she could remake it today as an anthem of resistance is an achievement beyond belief. This track rings out hope in the face of so many reasons to feel hopeless.

Album of the year, folks.  What a beautiful voice.  The songwriting is on another level.

I’m not hating on boygenius, but let’s remember the reason Dacus belongs in a supergroup is she just put out the year’s best album.

This is the competition for my album of the year.  Satirical.  Darkly funny.  With beats!  Caroline Rose has created an original persona, saying with style things worth saying.

Comes out of the blocks and bodyslams you.  “I don’t want to be your fucking dog.”  How’s that for getting to the point.  The delivery is tight.  The writing is tighter.

In an era when so many folks move to Brooklyn or Philly or wherever to join up an indie scene, there is a soft spot in my heart for bands formed by just getting together everybody in the hometown high school who wants to be in a band.  And Neon Waltz is from a sheep-farming community five and half hours north of Edinburgh (Google says so).  Their influences are, not surprisingly, their families’ record collections and the radio.  When folks in those circumstances decide to be in an indie band, they really mean it.  God bless them.

A track about being 22 that makes it sound like that is an adult age or something.  Not sure I appreciate the sentiment, but the composition of this song might be genius.  This reminds me of Natalie Merchant.  A formally interesting song about something I can’t really relate to, but beautiful to listen to.

I’m all in on tenderpunk.  Let’s go.  But this punk, it is not tender… and that’s not a bad thing.  Like the song says, it’s OK to feel angry sometimes.

OK, maybe not quite as good a track as “Picture of Health.”  Aaron would probably win that one.  This is also not so tender, however.  From Fixed Ideals, another album worth listening to.

This is either the first single off an upcoming album, or the last single ever from the band, because the band is either going touring with Pale Waves, or is breaking up.  The internet, it is not a source of consistent facts.

Our album of the year serves up its second essential track.  How good is Dacus at songwriting?  It’s 3:30 into this song before you know where it’s going. “You’ve got a nine to five, so I’ll take the night shift / And I’ll never see you again if I can help it.” Her vocals sound so effortless, she makes it seem like she could sing this song for hours.

For our other contender for album of the year, it’s not so easy to pick tracks.  This might be the best track and it also might be fourth.  I’m a sucker for narrative, so this is my choice.  Let’s shake it to some dark, dark shit.

This track is pretty new to me, but it’s exciting and could be a hit.

Let’s get heavy.  Maybe this sounds simple -- but directness like this can be a statement of purpose, not a lack of creativity.  I’m morbidly curious about Meg Meyers.  Atlantic Records tells you they are going to make you a star, and a few years later all you have to say is:  Please, please leave me alone.  There’s like four movies about that already, right?

Stoner lo-fi from Australia that somehow landed on Polyvinyl Records and from there into my brain.  The bass line is an earworm, so listen a few times and you are hooked.

In a different way, this groove rolls smoothly on, to similar effect. It seemed natural to put it next.

King Tuff is not a band I like a lot.  No disrespect, but this every-element-is-an-obscure reference-only-the-band-understands style of music is not for me. But I heard this on vacation in Arizona and my god this is an all-time great song about living in Arizona.

You will have an opinion on this track.  Everybody does.  (That’s a syllogism, folks.)  Structurally awe-inspiring as usual, Will Toledo cannot resist tossing off arena-filling licks at every turn.  Yes it is pretentious, or arrogant, or whatever.  It is also tons of fun to listen to.

Part II:  Tenderpunk Tracks Aaron Was Right About And You Should Listen To Also, And Are Not Worse Than The Above, I Did Not Mean To Suggest That