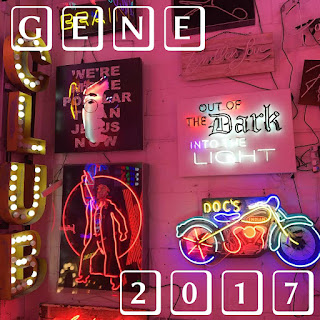 15. JR JR - "Control (Secretly Sorry)":  It's a shame these guys dropped the "Dale Earnhardt" moniker, but at least they're holding on to their position as a catchier, less misogynist Chromeo. I don't usually go in for spoken-word verses, but the sheer tireless jauntiness of this single won me over.

14. Alvvays - "Lollipop (Ode to Jim)": Speaking of jauntiness, this love letter to LSD is the year's cleverest sugar rush. LOLLIPOP-POP-POP-pop-pop-pop-pop!! (Your mileage may vary.)

12. Grandaddy - "Evermore":  These guys are still doing the same thing they've been doing for a quarter century, and it's still awesome.

11. Dams of the West - "Bridges and Tunnels":  Yeah, it's the Vampire Weekend drummer's band. And yeah, there's a reason why Ezra Koenig is Vampire Weekend's singer, and not this guy. But his debut album shows a promising knack for straight-ahead melody and lovely arrangements, best illustrated by this soaring opening track.

10. St. Vincent - "Los Ageless":  St. Vincent's songs only sometimes land for me, but when she makes contact she tends to hit it out of the park. This is a good example. I know her diversity of styles is why she's adored, but I wish more of her work had this sort of energy and propulsion.

9. MUNA - "I Know a Place": Aaron's already written about this one, and I'll just defer.

8. Pickwick - "Light It Up (Let It Burn)": I always have at least one weird pop throwback on my list; here's this year's. The chorus's glorious disco shuffle is what makes it.

7. Hans Zimmer - "Supermarine": Thank you, Coachella, for letting me justify putting this on my list. I'm a huge, huge Hans Zimmer fan, as anyone whose office is near mine knows well. This, from Dunkirk, might not actually be the best intro to his work -- it distills his percussive, recursive, Philip-Glass-with-guitars style to its essence, and newbies might be better off listening to the Interstellar score, or the Batman films -- but I think it's stunning.

6. Lorde - "Green Light": Not sure what to say about this one. Sometimes a great radio single is just great, period.

5. Spoon - "Hot Thoughts":  This is one of those songs that seems ridiculous "on paper," and if you listen to just a little snippet you might laugh at it. But there's a reason why these guys have been around almost as long as Grandaddy; Britt Daniel knows what he's doing.

4. BØRNS - "Faded Heart":  Like most reasonable people, I find the stage persona of this bohemian popster a little bit annoying, and even some parts of this fantastic song manage to grate, like the weird groan at the beginning. Then that ridiculously great chorus comes in, and all is forgiven.

3. Waxahatchee - "Hear You": It was about time Waxahatchee came out with a real anthem. This is the song I feel like she was gesturing toward for three promising but painfully understated albums.

2. Ezra Furman - "Driving Down to LA": This must, must, must be listened to in high fidelity, loudly, and with good headphones. It could kill small animals. I would nominate 2:07 (on the Spotify track) as one of the most badass moments in rock music, at least this century.

1. The New Pornographers - "Whiteout Conditions":  No one who knows me will be surprised at this choice, but for what it's worth, this song came out the first year I was equipped to understand it. The whole album offered a beautiful contrast between Newman's typically clever and upbeat pop melodies and a persistent, cold, metallic synth line that added a layer of unease and melancholy to almost every song, but that otherwise lovely aesthetic choice became utterly heartbreaking here.
Posted by Aaron Bergstrom at 9:18 AM