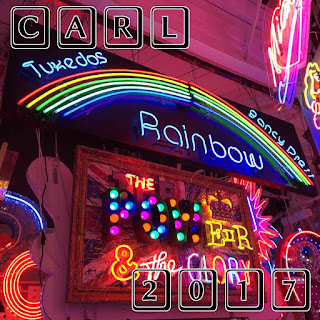 
A year ago, I asked that we spend 2017 listening to women first.  I don’t have any better advice for next year, except that we try harder.  The other big influence on this year’s list is more personal.  Our house burned down this summer, and I’ve been dealing with a lot of frustration and anger.  Turns out, that means listening to lots power chords and fast drumming: basically, my teenage coping strategy revisited.  Maybe that should not be surprising, but it took me a long time to recognize nonetheless.  Let There Be Rock.

But first let’s pause to acknowledge that what Aaron wrote about this track is 100% true.

In 2015 I developed a fantasy where I dropped out of college to support Katie Crutchfield’s music.  In that alternative universe, the release of this track totally justified those life choices.

A minor theme on this year’s list is recovery, and this might be the perfect 2:56 for that.  It just takes a while / For me to unfeel a thing / And the opposite of what you think / For that bell to unring.  The final twist on the chorus (Some weak shit that I don't need / I don’t want to go overboard) is a hugely satisfying resolution without a single wasted second.

I listen to this as a kind of prequel to “I Know A Place.”  Maybe in Australia they use “edge of town” the way we do “dead end,” or maybe this is just meant to avoid that cliche.  Either way, this is about that place where you come to see there’s no use in pretending you are going forward anymore.

It is possible there is an art school in northern England where you can get course credit for recording a successful indie rock power pop single.  That would explain this track.  But boy, this is an A+ (if there are letter grades in that northern art school, which I seriously doubt).  If Taylor Swift had recorded this, you’d be hearing it at halftime of the Super Bowl.

Aaron was right, this year they released a five song playlist, not off any forthcoming anything.  It makes a certain sense.  These guys consistently deliver great singles.  Why try to do anything else?

The New Pornographers are insanely talented and devoted to originality.  This year they wrote a song about dealing with depression, brilliantly calling it whiteout conditions.  It does not disappoint, which is saying something given the standards set by these folks.

This album got raves all over the place in the middle of the year but seems to be missing from album of the year discussion.  Did Jason Isbell do something awful in the second half of the year that I just didn’t hear about?  I’m not a big fan of this kind of music; it always strikes me as trading on nostalgia for something it’s fine to have behind us.  But let’s admit that Jason Isbell killed it this year and we ought to be grateful we had this track to listen to in 2017.

Alynda Segarra has such a compelling voice it is worth paying attention, even though it’s hard to understand what this band is about.  This track might be the least interesting one on the album, but it’s consistent with what I’ve been itching for this year.

It was a struggle to pick one track from Alex Lahey this year, so no surprise others landed on a different choice.  In creating this list I cycled through all the other options mentioned on this blog and have no confidence this one is really better than the others.

That point about falling back on listening to power chords and fast drumming:  thought of it while listening to this track for about the 100th time.  But I re-live those years like phantom limbs / Your indecision, a lack of empathy / I shoulda left, I shoulda settled for lonely.  Wow.

Am I coming out of left field?  Yes, yes you are.  This track came out of nowhere for me.  The first time I played it, I thought “No wait, I wanted to hear the new Portugal. The Man – this is cool but who is it?”

Some bands project the attitude that they just aren’t that into being a band.  Now, Now strikes me as one of those.  Or they may just have trouble getting along, like most of the people on earth.

There are some lines that, once you hear them, you feel must have been part of the language for generations.  “I have emotional motion sickness” is one of those lines.

This is just such a beautiful song, beautifully sung.

This is my favorite Craig Finn track.  I wish he’d do more of this:  embrace his love for Springsteen and follow that muse.  These songs are not easy to do well, and they have value – more value than anything The Hold Steady is going to do!  (The resistance to THS lives on.)

Love is not enough.  Here is a song you will not be hearing on a car commercial.

More power chords in a punk song about recovery.  Hey, I don’t need to apologize.  But listen to how the first chorus paints the way someone else is mistakenly framing that recovery, selfishly and maybe willfully.  That’s kinda genius.

Driving drums, quick-hitting guitar riffs, pop melody.  Just what the doctor ordered.  Under the indie haze there’s such a strong expression of the wish you could just start over.  Give me a chance to be a stranger /  Give me a chance to be forgotten / I want to know if you’ll be pleased to meet me  / I want to know if you’ll see me again.  Also, these guys are from the same town as Alex Lahey, so there’s a supergroup waiting to happen.
Posted by Aaron Bergstrom at 8:56 AM