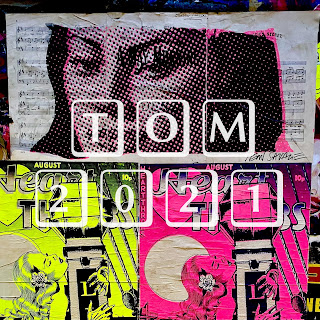 A true goddess of singing and storytelling, Jazmine’s Heaux Tales album was a highlight of the year and most songs could have made this list (“Lost Ones” made the 2020 list). This track features H.E.R. who took the challenge of matching runs (and did!!). It’s a lament of not being enough in a world of impossible standards and the urge to just give in and be somebody else in order to measure up. “Still don’t know what I was missing / what you asked I would’ve given”

A perfect pop song. Phoebe was my most listened to artist from 2021 despite not releasing an album this year. This song is a slight-departure from her sad girl vibes, which made it even more exciting of a listen

Caroline Polachek - “Bunny is a Rider”

Not a big fan of producers not crediting their singers on tracks like this (shout out to Denzie) but in a year where his tracks dominated the good times, this was my favourite. Fully 90s Brit house joy, it was the song that I envisioned in my head when I manifested BOPS and the moment lived up to the joy. A true moment of pop ascension in my life.

Lamenting that she was once absorbed by the wonders of the world as a child, but now she only soaks up wine. Seeking a life with substance and perhaps less substances. She has a way of writing lines so simple and powerful that I’m able to understand that classic songs were once new songs. “I hope I learn to get over myself / stop trying to be somebody else” is one of those moments where you stop, stare into the abyss and feel it.

Taking me back to “Perculator” school dance days, JT and Caresha interpolate the dance groove into an ass-shaking anthem. It gave us the best thing to scream at a party - or in any setting really: “YUNG MI-AMI YEAH BITCH IM FROM THE CITY!”

A mini gay-Avengers moment. A great lyric with three unique deliveries that could not be more defining of each pop gal’s style - “Charli, Caroline, Chris what you want what you want”

Blast the fucking bass! Pharrell hasn’t excited me like this production wise in a long time

Billie and Finneas getting dark and grimy is a revelation. Doing things so narsty that God has to look away because she wouldn’t approve? And because she would only want to get involved if she watched? Ma’am.

Rostam - “From the Back of the Cab”

Stealing an extra hour together, extending a connection that is doomed to end with daylight, fighting the sleep. Head on the shoulder on the way to the airport. There is something so familiar and queer about the picture painted. Falling deep and quick, while the track conveys a machine-like progression - a reminder that things are moving forward, as they do.

Yes, she’s still working with him and yes I hate it but the bops never miss. Here’s to hopes of a new production partner in the future - starting now!

SG’s domination of 2021 tracks continues as the three combine to create the smoothest of vibes.

There is a certain part of my brain that activates emergency serotonin when Rina scream “ANNNNNNND IM FREEEEE” to round out this queer woman pop power collab. It was the transition song at BOPS between our two sets bc it captured what the event was all about :)

The Normani situation is an interesting one: immense pressure to release a first album with a fanbase that seems ready to stan to the highest degree, yet no major hits. Another one-off here, Wild Side showed that she’s more interested in the RnB - rather than pop/hip-hop route - along the lines of the sampled Aaliyah. More than any other song on this list, this one has to be accompanied by the video - which is one of my favorites of the year.

First listen: WTF is this and what is wrong with her? Second listen: this is terrible, why is her voice doing that? Third listen: I MEAN YALL BITCHES BETTER YUH LIKE ARIANA!!!

The lyrics are a mantra of self-expression and praising our own existence, leaving behind any element of trying to be anyone other than who you are meant to be - time to speak the truth!

A seismic smash from the new ingenue. From the car noises that punctuate the production to the surprisingly emotive and anthemic chorus and bridge, it’s just a really really good song and I still fucking love it, babe.

An unusual Eurovision entry that feels like an increasingly intense experience in a Ukrainian dungeon rave. I was lucky enough to see this song performed live (multiple times in a row) at a Eurovision show, in a year where live music performances were rarities. The fury that this song builds to at the end was one of my favourite DJ moments of BOPS!

A consistent part of Drake’s career are his time/location based tracks where he spits relentlessly for 4+ minutes and it’s my favorite form of the fan favorite’s flow.

A video of trampolining? We will be supporting that!

Did we expect the nerdy Canada’s drag race contestant to drop the most viral verse of ‘21? We did not but Lemon sure did deliver!

There’s a bit of bizarre stutter-percussion that almost threw me off but ended up being the thing that pulled me in here.

Posted by Aaron Bergstrom at 1:01 AM