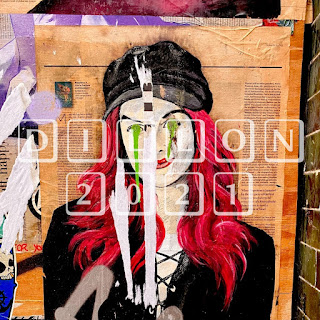 I apologise in advance for the number of breakup songs on this list. I know it's excessive but it’s what I listened to this year and now you can listen to the soundtrack of heartbreak as well.

In reality there were a lot of really high highs and very low lows for me (and probably everyone) this year. From those moments you forget about the entire world collapsing around you and you’re alone, screaming to your new favourite song to the moments where the whole world is acting falling around and there is absolutely nothing you can do about it. Regardless of which end of the spectrum you found yourself on any particular hour there is always a song for those moments. From the giddy, smiling-your-face-off highs to the can’t-catch-your-breath sobbing lows, there’s always a song. I thought a lot with this list about why we seem to love listening to sad music when we're sad and at least for me these songs helped me feel those emotions the way I wanted to but didn’t know how. So enjoy the music that matched my emotional ups and downs for the year. The transitions can be intense and make no sense but hey what better way to represent 2021?

A fantastic summer song meant to be played on rooftops, in parks, on boats and with all of your best friends. Everyone should be holding a glass of rosé or bubbles.

A new artist for me. I love the slight disco vibe and the music video is great as well.

The first of many (probably too many) break up songs on this list. Have you ever found those songs that just hit every emotion you need to feel on the head? Then you listen to it over and over again until you can’t feel it anymore? No? Just me?

That was this song for me for three months.

To bring you out of that break up song another break up song but more upbeat! Also a fantastic summer song. Or for dancing alone in your underwear in the living room.

Another concert stolen by Miss Rona. Sure this would have been a lot of fun dancing our faces to live.

Well there had to be one Adele song on here. All those memes about breaking up right before the Adele album so you could really feel it? Yeah I did that. I would not recommend.To say it was relatable was a bit of an understatement. Adele has a way of making you feel emotions you forgot to feel and then makes you feel them harder than you ever thought was possible to feel them.

I cried in public A LOT this year. If you didn’t at all there’s probably something wrong and if you’re not already you should probably see a therapist.

Fun song though and very, very relatable, also MUNA did some WORK this year.

Now for something totally different for me. I fucking love this song. I love the flow in and out of Spanish. I love the beat. I love the lyrics. I love how much of a bad bitch the woman is. Countless people were very concerned about me dancing to this on my bike.

This song is an instant classic. What this man is doing to stereotypes in the music industry is groundbreaking. Can you imagine a celebrity coming out as a power bottom when you were coming out? Cause I can’t.

Yes, I am the American that moved to Europe and is now obsessed with everything Eurovision. No I won’t apologise. It was a toss up between this in the Ukrainian entry, I just love the story behind the lyrics. If you don’t know, Mata Hari was a Dutch exotic dancer who was convicted of being a German spy in WW1. There was a lot of confusion if she was a double agent or not and the quote from her trail was “A harlot? Yes, but a traitoress, never.” Truly words to live by.

Nathaniel Ratecliff and The Night Sweats - “Faced Down In The Moment”

The first time I heard this song it made me extremely sad. But the more and more I listened to it the happier and happier it made me. All your life you’ve been face down now it’s time for you to see. Don’t let the good parts of your life pass you by, open your eyes and breathe in every moment you can.

It seems easier and easier to get lost in the daily moments of our life so stuck in our little tasks. Really sometimes it feels like you're in a river face down, the whole world rushing by. This next year my goal is to take note of those little moments more. The moments that make you smile, a friends laugh you haven’t heard in two years, a first kiss, a sunny day, a really fucking cute puppy, a good meal with good friends those things.

This won’t surprise many of you but I was living for these lyrics. I had three separate friends that don’t know each other describe me as an agent of chaos this year and this song is a great anthem for that energy.

“You’re so tall it’s so great. I don’t even know your name.”

Ber, Charlie Oriain - “Meant To Be”

Unlike some people (cough Aaron cough) I will give fair warning before presenting you with something extremely emotional. So fair warning this one wrecked me, but I also found it beautiful. The old saying goes if you love something let it go. Great on paper, sure. In real life it fucking sucks, it hurts, its complicated, it hurts more, it doesn’t make any sense, then it does then it hurst some more and eventually it starts to get a little better.

This song really put a lot of the feelings in order for me. I’m also a sucker for duet.

There were quite a few low points this year, as you can probably tell by a few of the other songs on my list. I’m not saying I dealt with all my lowest moments in the healthiest of manners (please keep all comments to yourself until the end). BUUUUT one night out on a massive dance party on a boat my friend (Nick) just told me that I was there to dance it out. And that was the best solution.

So when in doubt “don’t think, just dance, stop checking the time.”

I have a confession. I never liked Taylor in high school, college, or really at all. I’m not sure if it was internalised homophobia or I wanted to be that guy who didn’t like it just cause everyone else did. Whatever it was it was stupid and I missed out on a lot of screaming to Taylor lyrics in the car. This release of her original music was kind of like hearing some of them for the first time for me. And sometimes you need a 10 minute song about some guy you had a short fling with 10 years ago, ok?

THE breakout artist of the year for me. I had the album on repeat the entire year with no skips! If you haven’t heard of her yet, do yourself a favour and listen to this whole album. It's really a no skips for me.

(The album came out at the end of November last year but didn’t hear it till the new year, breaking the rules. Sorry not sorry. )

Juno (the dog) asked me to include her top song of the year as well:

She just really identified with the lyrics. Especially the chorus. She has a lot of beds but would most definitely rather be in yours. She does not have work in the morning though so good luck with that.

Posted by Aaron Bergstrom at 3:26 AM