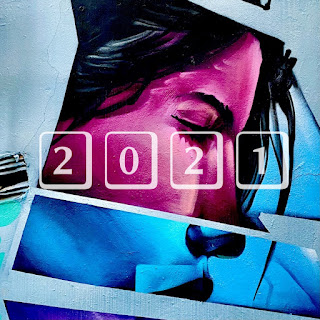 In the history textbooks of the future, the section heading for this last year will probably be something like "2021: Fear Gives Way To Exhaustion." (I'm just kidding, there won't be history textbooks in the future.) Was 2021 better than 2020? On the whole, yeah, probably. Was 2021 still awful in new and unique ways? Absolutely. 2020 was full of weird, misdirected enthusiasm, the idea that we had to do something, no matter what, to get through this one-in-a-lifetime year. 2021, then, was infused with weariness, the realization that we may be living this way for awhile, so save your energy.

Anyway, we got 15 Guest Lists! That's still pretty great! Let's smash them all together and see what we get!

SONGS OF THE YEAR
The rules are the same as last year: We judge this based solely on the number of lists on which a song appears. Since not everyone ranks their lists, and others rank only a part of their list, it would skew the importance of ranked lists if we tried to account for where on specific lists these songs appeared. So, one point per list. Simple. (Honorable Mentions count.) Also, we’re grouping all versions of a song together: this includes remixes, edits, alternate versions, and live versions.
Our Song of the Year is MUNA's "Silk Chiffon," their debut release on Saddest Factory Records, featuring label boss Phoebe Bridgers.
On the whole, a lot of variety this year, as only 14 songs appeared on more than two Guest Lists. 51 songs appeared on more than one Guest List, and honestly it's a pretty fun playlist. Nice job, everyone.
ARTISTS OF THE YEAR
Again, same rules as last year: We’re ranking artists based on Total List Mentions. If you had three songs by a particular artist, they get three points for that. Simple. We’re including all mentions, including features.
Our Artist of the Year is technically a tie, but that's no fun, so I'm stepping in and giving the award to Olivia Rodrigo. It was her year, we all know it. (Sorry, MUNA.) Beyond Olivia, our top artists list neatly demonstrates how transitory 2021 felt, as many of them didn't even put out an album this year:
MUNA: one single, two remixes
Jessie Ware: deluxe album re-release, one feature
Anges: a real album!
Caroline Polacheck: one single, one feature
Charli XCX: two singles, two features
Taylor Swift: constant reminder of how good Red was, and still is
Phoebe Bridgers: one feature, one remix
2021: The Year We Took What We Could Get.
43 artists appeared on three or more lists, and here they are:
Posted by Aaron Bergstrom at 8:57 AM