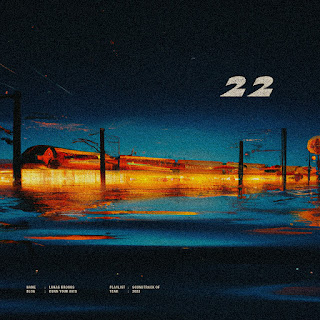 For me, one of the best pop songs of the year comes from Ethel Cain. If you know anything about this artist, this might come as a surprise. The irony is that this song is completely different to the rest of her music, serving to contrast the innocence of the character at the beginning of her story to the darker themes throughout the album. The album tells the story of the character Ethel Cain as a teenager raised in Southern religious tradition who falls in love with a man who ultimately murders and eats her. So finding one of the best pop songs of the year from here was a surprise. If you like this song, listen to the rest of the album. You may or may not like it. If you don’t like this song, same thing. For me, the album as a whole was one of the best this year, and seeing it performed live was great (as was the company). She also does a great cover of Britney’s “Everytime” for anyone interested.

MUNA is back on my list for the fourth consecutive year. In those years, the music just keeps getting better, and this their self-titled album is surely their best work yet. Any one of its songs could have been on this list (and I had a very hard time deciding which one I’d choose).

“Pin-Up Daddy” is the gender expression / non-binary anthem we didn't know we needed but that we’re so glad to have. These themes contradict what you would expect from Rett’s folk/country sound, but it all comes together perfectly in this remix of one of my favourite songs of the year (which technically came out in 2021). As you listen, please pay attention and appreciate the lyrics.

Is Jack Antonoff bringing anything new to the table in his latest work with The 1975? Mm not really. But I’m not sure I really want anything different, just more!!!

Welcome to the Scandinavian section of this playlist. We’ll begin with Dagny, Norwegian artist who is consistently writing excellent pop songs. She didn’t release much new music this year, but she still managed to release something not only good enough to be on this list, but at the top of it. Even though her music might be considered by some to be relatively basic pop sounding, she is challenging basic song construction and uses some clever and beautiful lyricism in her music.

We all know Lukas is a lover of pop music, especially from his Motherland in Sweden. Give it to me sweet like bubblegum, and that’s what this song does. I don’t think it’s anything revolutionary, but it’s been my favourite track to brush my teeth and dance in the mirror to.

I imagine “No One Dies From Love” will be on most lists. The entire album is incredible, and I considered including one of those instead, but let’s be real - this is the song of the year, my number one. The music video is a work of art, and seeing the song performed live was one of my highlights of the year.

I wanted to include a track from Milk & Bone’s Chrysalism on my list. I doubt this electro-pop duo is on many people’s radar, but I really enjoyed this album and I’d encourage people to check it out.

I’m always a fan of any disco-house music, and this year I was obsessed with this title track from Empress Of’s latest EP.

In short, I’m just loving a lot of lesbian pop acts right now - for many reasons. The female vocals I love, some pop-rock influence from my youth and gay drama - what more could you ask for?

The lyrics of this song tell the true story of Fletcher seeing a photo of her ex with her new girlfriend and having a strange mix of emotions of jealousy and attraction. Fletcher goes as far as using this girl’s real name and releasing the song without permission from her ex, which naturally stirred up some drama.

Charli XCX’s album CRASH was one of the top pop releases of the year, no question. And I love Charli, she’s surely the unrivalled queen of features, consistently bringing in the greatest forces in pop music to create amazing music. So I decided to include “New Shapes” on this list because of the features. However, I want to point out that compared to her previous releases, this album was a lot more of just her.

I don’t think I’m surprising anyone here by including a group known for their falsetto vocals.

Olivia O’Brian - “Never Be the One”

Basic pop music that I love, at least I’m consistent.

Noah Cyrus - “I Burned LA Down”

Miley Cyrus’ younger sister is really stepping out of her sister’s shadow, though not in a completely different direction. This song (and album) feels like a classic country song with modern. pop themes. I’m happy to see country music finding its place in pop music, and I’m happy to see other artists doing it who aren’t Taylor Swift.

Doeschii needed to be featured on this list (and “Crazy” just didn’t fit the vibe, but check that one out, too). This version of “Persuasive” features SZA and ultimately improves upon a song that was already great.

If Rina is releasing new music, it’s gonna be on this list. And again, it could have been any number off this album, but I’m a fan of hyperpop so….

Alright, so Fred again.. … There is so much hype behind this artist and I got swept up in it to say the least. I failed to get tickets to his concert despite many hours and desperate attempts to get them. I went to the album release party (that was a mistake, iykyk), but still I’m just so in love with this artist and the work he does. This album is near perfection and his Boiler Room set was the soundtrack to the gym for me for a big part of the year.

After 5 years away, welcome back ODESZA. It’s the same music they’ve always done, but it’s as great as always. The album is emotional, uplifting and somehow evolved.

Generally by rule I only include one song per artist on these lists, but this one is technically only a feature by MUNA. At first listen, you might be wondering why there are bodies in the basement - “Is this a murder anthem?” But rest easy, this song is a nostalgic piece about being young and going to basement house parties and rubbing all over each other while dancing to music. Not murder.

I always said Foxes is out here making some of the most underrated pop bangers out there. This is also Foxes’ first album in more than five years. After two years of nothing during COVID, this album is all about getting people back to the dance floor with tons of perfect dance-pop gems.

Okay, I know I said that I only include one song per artist, but The Knocks were really putting out great songs this year, and with different artists featuring on each song, it feels like a totally different thing. I’m making no apologies.

When I heard this song for the first time in February, I immediately knew it would be one of the songs of the year and since then it hasn’t moved from my top 5. Additionally, the music video for this song features drag queen Aquaria, so obvious gay points there.

One of my highlights from this year was getting to see Jessie Ware at Milkshake. “Free Yourself” isn’t my favourite song from her ever, but it is my favourite (and only) from this year. So congratulations, Jessie, you made the list!

Full transparency, I have no idea who this artist is. At some point Spotify suggested it to me and it really did it for me - it’s probably the tongue pops. It’s nowhere near one of their top songs (even from just the album), but I’ve been listening to it all year and I can’t stop. I love it.

Another great pop song from an artist otherwise unknown to me. Keep ‘em coming, Spotify.

Did you really think we’d make it through this list without Carly? If you know me, you knew this was coming. This year Carly Rae Jepsen released another fantastic album. And again, I could have chosen any number of songs - but you know what? I’m coming back for you. The last minute of this song is just perfect.

Weyes Blood - “God Turn Me Into a Flower”

I’m ending this playlist on a very mellow note with a song from Weyes Blood. I’d recommend listening to it in bed with the lights off, letting yourself be carried away with the soft and ethereal music and ambient chirping of birds. By the end, I hope you’ve let go of all your stress and find some relaxation.

Thank you Aaron for organising this, I look forward to it every year.

Posted by Aaron Bergstrom at 12:47 AM