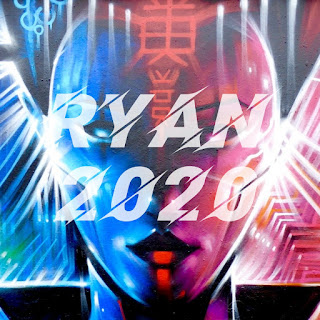 Last year’s GLW playlists soundtracked Matt’s and my Christmastime odyssey from Holland to several Pittsburgh suburbs and back. Peeking into everyone’s listening habits was a treat. Each clever turn of phrase, layered vocal, and pleasant chord progression proved my friends’ collective good taste and made me act like Amy Poehler watching Rachel McAdams at the North Shore High School talent show.

For the new year, I resolved to build on 2019’s musical momentum: attend more concerts, browse more music websites, click through more Spotify shares from folks who seemed to “get it.” And I’d try, knowing my particular pathology, to do it out of interest rather than obligation.

I was also hunting for outlets for my interest in typography. So at January’s end, I published a slapdash playlist of ten songs in a nice font on a simple grid. Ditto in February.

And then March was, well, March. Simultaneously locked down and laid up with a back injury, I grew desperate for new music and felt relieved come the end of the month, when designing my playlist helped fill the time. The lists evolved into a pleasant distraction from the terrifying initial weeks and months of the pandemic and sustained me as the days grew shorter and cooler and life moved back indoors.

The seventy-five songs below are distilled mostly from those eleven monthly lists. They still skew towards familiar, big-label pop releases, but there’s ample evidence of the year’s musical exploration: Rina, Empress Of, Simmy, Carla Morrison, Jim-E Stack, Secret Rendezvous, CAM, The Japanese House, and Chappel Roan (thanks, Dillon) can all now count on the fractions of pennies my future streams will net them.

Successive rounds of autumn lockdowns meant finding new ways to spend time and expel penned-up energy, so I looked at my guest week list, which by then was taking shape, and wondered if a deep dive into its detail might reveal something about the general tastes that comprise my musical palate.

Aided by a metronome, Google, several spreadsheets, a suitable color scheme, and a focus born out of obsessiveness, I split the songs into three tiers (thirty-five in a bottom tier, twenty-five in a middle tier, and fifteen in a top tier); plotted each song on a grid according to its tempo (on the x-axis) and the vividness of its lyric (on the y-axis); and layered the grids atop each other.

The methodology has its weaknesses (lyrical quality is subjective, songs not in 4/4 yield wonky tempos), but it did cluster songs whose similarity I hadn’t yet noticed. The grid contains regions for house-inspired tracks with occasionally nonsensical lyrics, the indie music driving the vinyl surge in popularity, the new disco revival, mid-tempo earworms that suck to dance to but make cleaning your apartment a gag, and bops destined to become gay bar canon.

Salty, sweet, sour, bitter, umami, uzaddy: all my tastes are there, but focusing on the trends obscures the depth and peculiarities of the music I loved this year. The diverse rhythmic and lyrical sub-genres of rap and R&B scattered those songs across the grid. Only in the fine print do you uncover my embarrassing affinity for music by drag queens: Trixie, Bebe, and Juju have all made the cut, albeit for three very different songs. There are entries in seven languages; no fewer than three are tied to pieces of Netflix IP. And my favorite song of 2020 sits in limbo, suspended between several clusters.

On a playlist of just the top tier, you’d hear disco, African new-soul, electronic pop, and jazz rock. There are songs by well-established artists, those with niche followings, and others still probably bussing tables to get by. Some are confessional and grounded, others fantastic and over-the-top. Many occupy the liminal space home to the most affecting pieces of art.

As I yo-yo-ed through the year, there were times I needed calls to action or invitations to temporarily escape, something to chastise me or to build me up. I found that in these songs, music for crying and dancing and fucking and contemplating, all of which I did in far different amounts this year than last.

They are, to be trite (but sincere and, this year more than ever, grateful): songs for being alive.

seventy-five songs for 2020, arranged by tempo and lyrical quality, with notes on fifteen 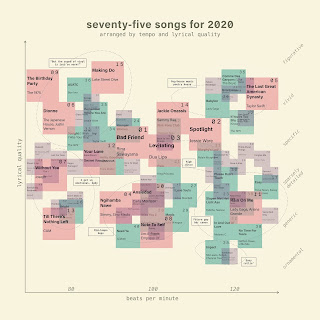 In 2020, folks on several continents accused me of being a bad friend.

But you know what’s great about therapy? After enough of it, you stop projecting onto songs like “Bad Friend.” You don’t tell yourself, “Rina’s right—I really haven’t been there for folks this year,” and instead realize, “These girls sound like a real gag; I’m so happy they got their life to Carly.”

You learn how to not invent criticism but focus instead on what you know to be real, like the bamboo flutes layered over the opening bars that subtly set the scene for the opening verse in a Tokyo karaoke joint.

You quit over-apologizing, taking solace in what Rina preaches in the sing-along bridge: that we’re all messing up, all the time, and yet still here.

You stop shrinking from situations where you risk being rejected or embarrassed in favor of giving things your level best, over and over again if necessary, like the final choruses that cascade into each other over the best bass line in a pop song all year.

This song would have wrecked me in 2019.

This is Night-Car-on-the-Snowpiercer disco: the alluring, foreboding soundtrack to a party at the end of the world. “Spotlight” nicks the bass from a rave, the strings from a requiem, and backing vocals from a siren song, and unfolds over five glorious minutes the way all of Ware’s best songs do, with her pining for something just out of reach.

“Tell me when I get more than a dream of you,” she aches, on behalf of us all. A fitting sentiment to return to over and over this year.

Apologies in advance to the poor twink who, in trying to squeeze past me to rejoin to his friends, gets violently ejected from the vortex of hands and arms I will become the first time I hear this at a gay club.

It’s July 2021. Tens of millions of vaccine doses have been administered and enough of The Netherlands has been innoculated to lift distancing restrictions.

On the next cloudless, 25-degree day, in a ceremonious shedding of the “old ways,” you and 30 friends rent a boat that comfortably fits half that many to meander down the Amstel.

The frat boys everyone’s been ogling all afternoon make the turn home somewhere just north of Ouderkerk, but the group, as if buying indulgences for the 2020 it lost, scrounges up the cash to buy another hour of summer.

The boat sputters southward once more and someone puts on “Ngihamba Nawe.” Though the Zulu is unintelligible, context makes the meaning clear: it’s summer, we’re sunburnt, pleasantly stoned.

You walk up to a friend standing at the edge of the boat, staring west out over the polder. He turns to you and smiles. You embrace. It is a long hug, it is long overdue.

My love for this type of decades-spanning story song goes back to my childhood, in which Billy Joel’s “Scenes From An Italian Restaurant” was a constant presence.

And even though these songs always have something up their sleeves, I fully fell out when, at the end of the bridge, Miss Tayla deadpans that, “And then it was bought by me,” line. The nerve!

These are my favorite song lyrics in 2020, but in particular the refrain, “Wishing that someone would film the way I’m looking at you right now.” Toying with perspective without forcing a shift to the narrative point of view is an exceptional bit of songwriting from Amber Bain.

This also gets bonus points for its ever-eroding sonic quality, a nod to ambient tape music like William Basinski’s classic, The Disintegration Loops.

No percussion, no bass, no keys, no bells, no whistles. Just three sisters, two guitars, and one powerhouse vocal.

Don’t let it knock you down /

Bring you back around

Thus Empress Of, over the factory-floor whirring Jim-E Stack has cooked up on “Note to Self.” An inverse “this is me trying,” this was grease for the wheel of 2020’s nightmarish, late-capitalist, pandemic-addled locomotive, when all we could hope for was a return to “normal.”

Matty Healy and company bring a self-congratulatory cleverness to songs like “If You’re Too Shy (Let Me Know)” and “Tonight (I Wish I Was Your Boy),” both brilliant songs in their own right, but in a way that keeps the listener at arm’s length.

Not so on what, for me, is the gem of Notes On A Conditional Form, “The Birthday Party,” which feels wholly uncontrived, bracingly honest, and unsettlingly incisive in its depictions of the petty hypocrisies we perpetrate and tolerate to stay sober, stay together, or stay happy.

Spanish 1 teachers everywhere must already be using this gem by the Mexican singer-songwriter in the vain hope of illustrating the use of poder and querer with infinitives while also proving they are “down with what you kids are listening to.”

(I was this unenviable sad sack once, lacing lessons on rhetorical techniques in Latin with references to Young Money rappers’ penchant for anacoluthon.)

Gaga hilariously over-commits (RAIN. ON. ME.) and Ariana evinces a flippant casualness, and in such a way that makes you wonder, “What if Anne Hathaway and James Franco hosted the Oscars, but it was brilliant?”

In this year’s nod to a homegrown artist, Amsterdam-based duo Siestke Morsch and Remi Lauw throw it back to Sade’s school of sensual, quiet storm R&B.

“Till There’s Nothing Left”

All you need is four chords and the truth: it felt like the world was about to end when CAM released this in March. Good song, great timing.

A high-school lesbian meet-cute: perpetually overlooked girl pines for her brilliant, beautiful classmate (the titular Jackie O), who one day unexpectedly takes an interest. All the beats are there for a Clone High/Big Mouth hybrid I would definitely watch.

To the next generation, Merry Christmas /

You’re working harder than ever now /

And the coffee sucks /

You know, Colombia and Kenya /

Got too damn hot /

And now you’re making do with what you got

The brilliance of “Making Do” is in details like this: the dual threats of a lifetime of shitty coffee and agile scrums meet at the intersection of quotidian and threatening, tragic and all-too possible.

Lake Street Dive has been creeping towards outspoken socio-political commentary for a while now; if they stay the course, they'll rightfully be considered some of our most talented and cherished makers of protest music. 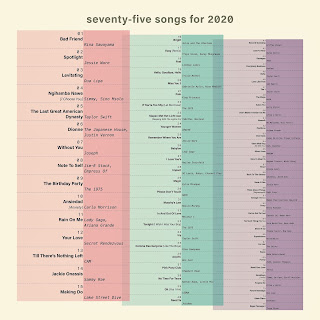 I could say plenty about songs 16-75 (they’re in the medium-sized green boxes and smaller purple ones), but they overlap enough with other guest lists that my observations would, I’m sure, be redundant.