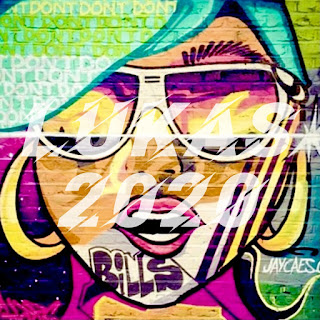 This list isn’t necessarily what I’d consider to be the best songs of the year, but the songs that defined 2020 for me; the songs I shared with friends and have memories tied to. It’s my soundtrack to 2020. Just make sure to brush your teeth after listening to this list because it’s filled with super-sweet bubblegum pop (but also some variety, I promise). I tried to write some stuff for each song on here, but one of the reasons I love music is that it speaks for itself when words fail me.

it’s the end of the world, but it’s ok is an appropriate title for Slow Magic’s 2020 album. The soothing sounds and reassuring lyrics promise that “everything is alright”; and I just really needed to hear that.

If you know, you know (@Dillon, @Jeff). One of my most played songs of the year, this track was locked into this playlist very early. And the video is like a violent episode of Pokemon, and who wouldn’t love to see that?

Mmmm, love these falsetto vocals. Light some candles and break out the massage oil, this is baby makin’ music for sure.

Kiiara has been on my radar for several years, every now and then releasing a single that inevitably catches my attention. So when she released her first full album this year, I was stoked to find several new tracks that I loved.

I’m happy to take credit for this song coming up on several other lists this year; I really pushed it hard for a while. But for good reason, it’s a great fuckin song, even if it’s not by Kim Petras (@Ilana).

Leave it to TikTok to nearly ruin one of my fav songs of the year with a stupid trend. If you haven’t seen it, I encourage you to avoid it at all costs and just enjoy the song for what it is.

Zara Larsson - “All the Time”

Technically this song came out in 2019, but I heard it for the first time on New Year’s Eve and it defined pre-corona 2020 for me and continues to be a staple of every intimate party setting I attend within my bubble.

Credit where credit is due - Charli XCX created this album from scratch at the very beginning of lockdown and delivered it to us within 6 weeks; right when we needed it most. Also, her’s was one of the last concerts many of us were at together and it was a fuckin party. More of that soon I hope.

Donna Missal - “Hurt By You”

One of my absolute favourite vocalists, Donna Missal released a new album this year that shifted from the rock vocals I fell in love with in 2015 (see “Keep Lying”) to a more country sound that I am absolutely obsessed with.

Jeremy Zucker - “somebody loves you”

The whole album is great, but this song just builds so well and says words I need to hear sometimes. It’s been on repeat a lot throughout the year.

I really tried to leave this song off the list, but I’ve listened to “Be Kind” so many times that I just had to include it. Pop-garbage but I love it. Just brush your teeth and deal with it.

You guys, this album was so good - and this was my favourite song on there.

You didn’t think I wasn’t gonna have some Kim on my list, did you? No one is surprised to see this here, just be grateful it’s only one. It’s the perfect summer song and there was no way I was excluding it from this list.

Two things this year stole from me; my youth and parties. I knew at first listen that this song would be on this list; also the video is amazing.

PNAU delivered the summer party vibe we needed during this year’s bummer of a summer. If I close my eyes, I can imagine palm trees, lasers and smoke machines and I’m looking forward to recreating that in the future.

The original version of this song is great, but this remix is the version I fell in love with. (See her Christmas version “So Cold You’re Hurting My Feelings” for more magic.)

Louis the Child - “Nobody Like You” (feat. Vera Blue)

Good take away from my time in quarantine this year; live without regrets.

A late addition to this list, but I fell hard for this track when I heard it. Love the retro-sci fi vibe it gives. (@Jeff) knows what I’m talking about.

By now you might have noticed that I am an absolute sucker for some falsetto vocals.

Obviously it was impossible to exclude Rina from this list; easily one of the best albums of the year. Any of her songs could have made it on this list, but I chose “Bad Friend” for many reasons, not the least of which was that it’s how I felt many times this year.

As if I was gonna leave Carly off this list. I spent a lot of the year wishing someone would “touch, touch, touch me”, am I right ladies?? 😅

Ok, I’m ending this list with probably my favourite track off my favourite album of the year. I love a song that can so perfectly describe one specific moment we’re all familiar with. Great song writing, another great Scandinavian pop artist.

Posted by Aaron Bergstrom at 1:38 AM