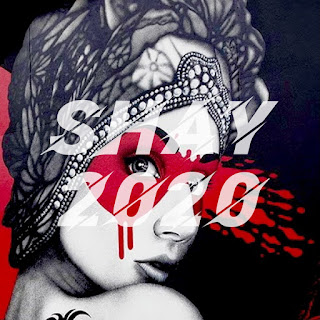 It’s rare that you can get the two best rappers in the world on one song, but it happened. I don’t know what’s in the water in Houston, but when Bey spits, “I’m comin’ straight up out that Third / I whip the whip like I stirred it,” I’m ready to throw on my cowboy hat and pretend Texas went blue. Oh yes … and without fail, 2020’s best OnlyFans reference.

2. Taylor Swift - folklore (represented by “this is me trying”)

Taylor Swift is one of the greatest songwriters alive. You can fight me on that. You will lose. This year, she dropped two legacy-defining albums that are best consumed in their entirety. And that is how I have consumed them, again and again.

I truly don’t know how to describe the magnitude of this one. So … *SCREAMS IN GAY*

Two of rap’s most promising female artists and the da baddest bitch herself, Trina. Honestly, throw a Trina verse on almost any song and it’s like adding cheese to your meal. It will, inevitably, be better.

I was recently personally victimized by the phrase “NPR country music” ... so here we are. Imploring his white listeners to imagine living in a world where police brutality was directed at them, Childers sings in a voice on the verge of breaking:

How many boys could they haul off this mountain

Shoot full of holes, cuffed and layin’ in the streets

‘Til we come into town in a stark ravin’ anger

Looking for answers and armed to the teeth?

“What A Time To Be Alive” has never felt more ominous. But, any time that Drake and Future link up, there’s like an 85% chance I’m going to get caught rapping to it in the gym by a straight bro. And maybe I like it that way.

Those who know me know that I am, despite the “restraining order,” married to Benito. The gender bending fashion, the allyship, the fingernails. I love this man. So imagine the pride I felt when mi esposo got in full fucking drag for this music video. A reggaeton banger about leaving women the fuck alone on the dance floor? We love to see a cis straight man chipping away at the patriarchy.

Not the Rosa Parks line.

It never happened if the dick wasn’t snappin. Period.

Singing. Lyrics. In. Whistle. Tone. (Also, we stan a queen who doesn’t take herself too seriously, so Ari singing about her tracks is *chef’s kiss*.)

A song that wears self-reflection like a t-shirt that’s just a bit too tight. That moment when you awaken to the soul-crushing pain of knowing that, deep down, you were never as good as your partner believed you to be.

American Idol Season 12 boasted the series’s best Top 4 and best judge (Nicki Minaj). Emerging from that Top 4 was Kree Harrison, a Lee Ann Womack/Trisha Yearwood hybrid who really didn’t make much noise after coming in second place. But, this year, she dropped this classic 90s country ballad. It’s a gorgeous song dripping with the hurt of a dissolving relationship sung from the perspective of a woman who just needs some help severing the ties.

One of the first real “oh shit, this is real” moments of 2020 was the cancellation of the Eurovision Song Contest in Rotterdam. Little did we know that our broken hearts would find comfort in the Netflix film and that this song would leave me sobbing multiple times. In the context of the film or taken alone, it is absolutely phenomenal. I’m tearing up as I write this. I’m ok. We are ok.

14. Sturgill Simpson - “Turtles All the Way Down”

Sturgill sings the hits … in bluegrass.

Got to see this musical while stuck in London during a storm in February. A Max Martin jukebox musical that brought salty, homosexual tears to my eyes. And this one … whew. Cassidy Janson is one of maybe five people in the world who have successfully said, “That Celine Dion song is not dramatic enough. Let me fix that.”

I don’t think there’s anything that will stop me dead in my tracks quicker than a song that pays tribute to loving North Carolina while knowing you need to be somewhere else.

A heavily tattooed, bisexual Dutch Eurovision contestant who makes Americana music. That’s just a word soup of sexy. Was this song described to me as “James Taylor Week on American Idol”? Yes. Is that the second American Idol reference in this list? Yes. Do I absolutely love both this song and Douwe Bob? Yes, yes I do.

Did I think a remix of an unreleased Glory-era track from Ms. Britney Jean would make my list? Nope. 2020 is weird.

My friend Lukas, a fellow list contributor, correctly identified me as someone who would love this country-tinged track. I listen to this song and think of the blissful days of 2020 before the world closed.

Another spot-on recommendation by a friend. Dillon has given me so many things: unceasing ass thirst-posts on IG, unceasing pro-ginger propaganda and an unceasing obsession with this song. It exists in a genre vacuum to me. I don’t know what it is or where it came from, but I want to go to the Pink Pony Club.

21. Caitlyn Smith - “Damn You for Breaking My Heart”

One of those under-the-radar female country singers. An evergreen phrase that is fucking exhausting. WOMEN. MAKE. BETTER. COUNTRY. MUSIC. Put them on the damn radio.

I’m a Bad Gay™ for being very “meh” on the Dua album. But this one was an absolute standout.

The most mind-blowing part of this collab is that it happened in both of their “post-cocaine” career phases.

Ms. Maines said, “It’s my turn with the Antonoff” and it worked out quite well, thank you very much.

Just pop perfection from a woman who essentially took a 2001 TRL Top 10 list and said, “I can do that better.” And she did.

Historians will one day document “Do you remember where you were when …” stories about the moment homosexuals first experienced the aural perfection of this transition.

A gorgeous throwback to the Yours Truly era that I can’t get enough of.

Added to the list of things Dolly Parton personally did to save humanity in 2020 is this beautiful song that just gets more heartbreaking and hopeful the longer we find ourselves stuck at home.

Almost couldn’t believe this song came out in 2020. Glad it did.

A stadium rock epic from this year’s most eclectic, most endearing pop star. I couldn’t be more happy she broke through this year.

The song itself doesn’t really knock any standards off of my top Christmas songs list, but Mimi and Ari harmonizing on whistle tones almost saved 2020.

These two songs have been around for years, but just appeared on streaming services in 2020. The-Dream at his absolute best. Dirty, clever and a beat that buries itself deep in your brain. A ten minute reminder of why he dominated music for nearly a decade.

Posted by Aaron Bergstrom at 12:05 AM