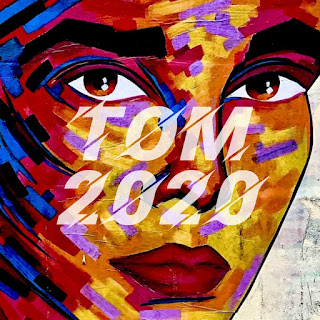 The songs that got me through 2020. Some resonated because they offered a unique perspective and timely message - maybe even wisdom - in a year that challenged my suitcase-toting lifestyle, and my mental well-being, like no other. Some represent stolen moments: clearing space in the gay club in Amsterdam, rapping along with friends in LA, driving down a North Carolina back road in summer with the windows down. While these moments remain inevitable, a previously unimagined gratitude for their hypothetical existence fills me now. When escape wasn’t possible in 2020, these songs often represented the only way to blast off - whether it was to the planet of Chromatica, the folklore/evermore forest, the disco dancefloor, or just a dark room meant for quietly sobbing! :) Without further ado, my top songs of 2020:

I’m sure it’ll come as no surprise that this song sits atop my list if you’re a friend. I wanted to be clever and not pick the obvious one but out of everything on this list, this track brought the most joy and excitement to my life in 2020. An iconic pop match-up of two larger-than-life weirdos both in the heights of pop stardom but also working through some incredibly tough shit in their lives. They really concocted this one in the Haus lab to be pop perfection - with Bloodpop and a team of producers/writers taking credit - but, regardless, the sentiment of weathering a storm from these two still rings true. The video. The choreo. The VMA performance. The start of Ari’s 2020 whistle-dom. When I tell you that I will weep seeing this live for the first time - I MEAN IT. Here’s to a little bit less rain in 2021 until then.

Jamie has always taken the post XX spotlight but it’s finally Romy’s turn! She describes this song as a love letter to the energy and community of connecting with loved ones in a club but more specifically about her and her girlfriend. “If you’re ever lonely, if you can’t find the way, if this world comes to an end - I wanna be there with you.” Well, guess what MIM!?!

A song about maturity and coming to terms with two good people hurting one another. And where does that leave you? Arriving at the end of 2020, we were certainly still right down in it with this villain-of-a-year, but perhaps with some hindsight - once we’re above the trees - we’ll understand that there was still happiness because of this godforsaken year and there’ll be happiness after it, too.

A production team-up from Scott Storch and Dutch producer Avedon, this was the track from CxH’s iconic Ungodly Hour album that ruled the year, with the sisters taking the crown for quarantined live performances. “Who are you when no one’s watching?” the song asks. “You close the door to your apartment - are you afraid of the silence? Are you afraid of what you’re finding?” Aggressively on-target for a year where we had nothing but time to sit with ourselves. I’d place an emphasis on the “had” in “I had to learn to love me lately.” Ultimately the conclusion that “it don’t have to be lonely being alone” is a reassuring - if not aspirational - place to land.

This song started out resonating with me in early quarantine days, looking back on better days (sweaty rooms of best friends screaming Carly lyrics), but it grew to hold a different meaning as well. This year presented challenges for maintaining relationships that we hadn’t encountered before. How do we connect when we can’t see one another? Or when we just don’t have the mental energy to interact? My go-to mode in times of crisis is to make a to-do list, including making sure everyone is taken care of before myself. This year brought a new experience of running out of that energy because I needed to turn it inward. It was great to hear Rina (my fave artist of the year) articulate the anxieties that came about as we tried to stay together with our friends while often being in the middle of falling apart, barely lucid. I spent so much time in a loop of not having the energy to be “a good friend” but having anxiety over being a “bad friend.” In the end, I feel like we reached new levels of honesty, compassion and understanding that I hope can carry us forward from here. Thanks, Miss Sawayama :)

A title that could easily be on the 2020 tombstone. In a year full of missing out - FOMO of a life once known and somehow still in the social sense - I just found it so important to declare the funks and sadness. “If you disappear, then I’m disappearing too,” or rather - I know things couldn’t be worse right now but you’ll get through this part and you better hold up your end of this shit because I’m going to want to fall apart real soon and I need you there then. You know the feeling?

Ar-n-B Grande is my favorite and she gave us a surprise full-album genre deep dive this autumn. By far her best vocal album (saying sumn!!). This grown-n-sexy track calls back to the 90s and probably has some shocking lyrics for those unfamiliar with there being a freak underneath that high pony. The bridge is to die for, too.

Out in 2019, it was still my most played Spotify song of 2020 so she has to make the list! Those layered vocals mmhmm.

Will Ferrell is the first guy to show up on my list! Very 2020. The emotional and vocal apex of a fun film where it all comes together (her secret song! Breaking the ESC rules! The legendary note at the end! Singing in Icelandic!). “Where the magic nights surpass all others” might be my favorite sung phrase of the year. This film and song lessened the blow of ESC being canceled ever so slightly.

From the same producer as “God’s Plan,” this breezy drop from Drizzy reminded me so much of his earlier horn-synth tracks produced by 40.

The minor drop into the verses with the pulsing string synths and soaring vocals is one of my fave musical moments of the year.

The perfect combination of the hottest rapper of 2020, a TikTok sensation, a surprise drop, quotables, and the Queen B.

I found out about this album when I saw that she was covering “Arpeggi” from In Rainbows and was glad that the trap she set worked. Brilliant production throughout Inner Song.

Somehow both sexy and lumbering, this kind of round bass synth production always draws me in.

SHEW. The woman who invented singing was back with a couple recordings in 2020 and this one is an emotional journey, honey. “Don’t have too much fun without me. Try not to forget about me - try not to love no one,” she pleads while acknowledging the impossibility of the request.

This beat is Afrika Bambaataa shit bananas with a Miami sound and a “Whomp (There It Is)” sample. Look how Nicki ate that!

2020’s queen of disco (*ducks*) turned up the heat with this banger. Need heels and dancefloor neeeeyow!

Representing my fave album of the year, this track is an ode to wasted potential, following your fears and the sinking feeling that you won’t measure up. But if 2020 taught me anything it’s that “at least I’m trying” is good enough sometimes.

Sitting nicely atop my “songs I’m dying to hear live” list, this Nu Metal infused anthem represents the most exciting tendencies from her iconic SAWAYAMA album.

This production is most pleasing to me. And of course I have no idea what she’s saying.

Love it when the ladies get vulgar and it causes an uproar. Conservative pearl-clutching propelled the ladies into cultural moments in 2020 - love to see it.

I typically love these ladies most when they’re doing trap/KPOP genre benders but this high-octane pop moment stuck with me the most from THE ALBUM. Their documentary this year was also a fascinating look into the creation and life of KPOP groups.

Hoping that next year’s list has much more ROSALÍA, but one of my favorite times she popped up was her doing Travis’ iconic ad libs (“STRAIGHT UP!” “IT’S LIT!”) and a Weezy “Lollipop” call-back.

A verboten request in 2020 but I love this 90s-UK-house-inspired bop!

Signature rasp and a nice little slice of life: losing someone but realizing that the process of healing is a tale as old as time and you will make it through the tunnel.

Sam’s new album was like an injection of all the best 90s genres, specifically New Jack Swing, RnB and house and I can’t wait to dance with the PPL again!

Being in the discussion for my fave all time band, their new material will always get a listen. Happy to report that their newest album was pretty great! I love this one and the k.d. feature seems so random but sounds so perfect. In a verse where Brandon cannot sleep with the negative voices in his head, she comes in to encourage him to give himself some credit. A novel idea for myself in 2020, but one with much improvement. May we have more of that voice in ‘21!

+ 30 other favorites in the playlist here but I couldn’t write them all up - enjoy!!!

Posted by Aaron Bergstrom at 11:25 PM