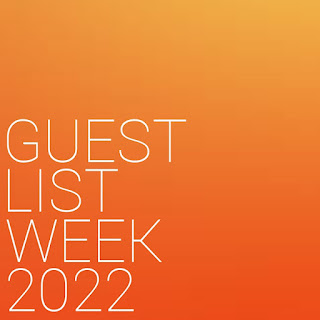 Every year is a blank page, and in this, the eleventh year of the Guest List Week project, we found more ways to fill that page than ever before. The open-ended prompt “Just Write Something About Music” has never led to better or more interesting results.

We brought back eighteen list-making veterans and introduced four new friends. We had lists ranging in length from five songs to a hundred and seventeen. The oldest song included dates back to 1961 (and it was written in 1952!) We had Ethiopian jazz from the 1960s and Nigerian funk from the 1970s. We organized our favorites based on the concert venues of Amsterdam, the months of 2022, and the future concerts of 2023. We made up awards and handed them out to deserving recipients. We mostly ranked songs, though some of us ranked albums and others ranked playlists. We made lists by ourselves and with our friends. We dreamed of a post-Drake world, and we made it a reality.

Given this level of variety and creativity, I’m not sure if it still makes sense to attempt an aggregated Song of the Year and Artist of the Year, but tradition is tradition, so let’s get into it.

SONG OF THE YEAR

Would you rather be liked by everyone or loved by a few? Should universal but muted appreciation be seen as an artistic triumph? Is consistency underappreciated? These are the somewhat surprising questions we have to answer in crowning 2022’s Song of the Year.

The rules are the same as last year: We judge this based solely on the number of lists on which a song appears. Since not everyone ranks their lists, and others rank only a part of their list, it would skew the importance of ranked lists if we tried to account for where on specific lists these songs appeared. So, one point per list. Simple. (Honorable Mentions count.) Also, we’re grouping all versions of a song together: this includes remixes, edits, alternate versions, and live versions.

And yet, I get why everyone likes it. I like it. It made my list. But, when we look back on 2022 ten, twenty, fifty years into the future, we will not be talking about “Free Yourself.” Some of the songs we probably will be talking about (“American Teenager,” “BREAK MY SOUL,” “Anti-Hero,” etc.) show up in the list soon after but, for now, they are all looking up at Jessie Ware.

Here’s a list of every song that appeared on three or more lists.

See here for a longlist of every song that appeared on two or more lists.

ARTIST OF THE YEAR

Artist of the Year tends to be a better representation of the year that was. We might disagree on our favorite songs, but, as in years past, certain artists were simply undeniable.

Again, same rules as last year: We’re ranking artists based on Total List Mentions. If you had three songs by a particular artist on your list, they get three points for that. Simple. We’re including all mentions, including features.

As it was last year, our Artist of the Year is a tie, this time between the two women who will one day rule over warring nation-states in our imminent post-apocalyptic wasteland: Beyonce and Taylor Swift. You should probably start thinking about pledging your allegiances now.

Even beyond those two institutions, our top artists list just looks like 2022. From the coronation of MUNA through the triumphant return of the Yeah Yeah Yeahs, this is a fair summary of our probably-not-as-bad-as-last-year year.

Here is a list of every artist with five or more points.

See here for a longlist of every artist with three or more points.

And, with that, I’m happy to put 2022 to bed. Your first great song of 2023 is “I Want To Start A Religion With You” by Fireworks, and your first massive hit appears to be “Flowers” by Miley Cyrus. We’re off to a good start!

Posted by Aaron Bergstrom at 4:47 AM