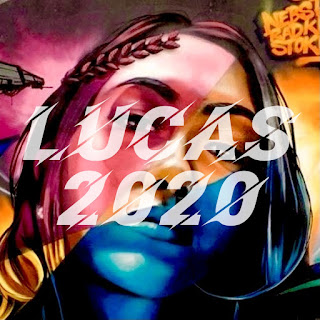 It’s been a long, difficult year, and as I am sure everyone else can relate, it was made somewhat bearable thanks to playing Spotify for what seemed an endless number of hours. According to my Spotify 2020 Wrap Up, I listened to only 55,056 minutes. Are you sure, Spotify? Are you sure you didn’t miss all the other minutes from the second lockdown? Or does the algorithm only count the first fifty plays of an album?

In between playing Future Nostalgia on repeat, I did manage to play and dance to a good number of Latin hits. This year brought us great music and Latin music was no exception. That is why, same as I did last year, I will focus my list solely on Latin music (or Latin adjacent).

Though this track was technically released in late 2019 (I’m bending the rules a bit), it dominated the airways and my Spotify playlist in 2020. What can you expect from “"The Queen" with "The Queen"? An addictive song with catchy lyrics singing about how to get over an ex. I know a song is a hit by the number of times Jamey asks me to play the song and by how many lines of the song he knows (extra bonus points for verses in Spanish). This song scored high points on both.

Perhaps Jamey’s second most requested song this year. This is the ultimate quarantine song for its embrace of twerking by yourself; "Yo Perreo Sola" (“I Twerk Alone”). This song embraces female empowerment and comes with an equally fun and groundbreaking video. If you haven’t seen it, you must check it out.

This song was all over TikTok (yes, I’m aware I‘m a 36-year old man but this app is highly addictive) and is perfect for this age of social media; when you have to see an ex being happy all over Instagram. The track gained more popularity when The Weeknd joined Maluma for a remix, singing the opening verse in English and then the chorus in Spanish.

This song sounds unlike anything Rosalía has done before and maybe it’s the reason why I enjoy it so much. It’s an easy song to listen to with its acoustic guitar and some electronic and flamenco brush strokes.

The two generations of Colombian artists come together for this tropipop track that fuses vallenato and cumbia beats. It takes me back to my childhood when I used to listen to Carlos Vives and his unique vallenato style. I’m a big fan of his updated take on this traditional genre of Colombian music.

This remix takes an already great reggaetón track to the next level. This song has an almost childish quality to it, with catchy and innocent lyrics; Alejandro singing about falling for a girl who has him wrapped around her finger. A departure from the overly sexified lyrics from other songs in the genre.

This song embraces the Afro-Colombian culture with a futuristic tropical sound. I’m always looking forward to any release from this group, as they always deliver great music by fusing regional and traditional sounds from across Colombia.

I really like hearing a more chilled out and emotional version of Maluma, especially with this tribute to my city Medellin (or Medallo, as it is often called). I especially like one of the last verses:

On J Balvin’s conceptual album Colores, where he names each song after a color, "Rojo" is one of the softer reggaetón tracks and showcases his more romantic side.

I’m waiting for the time Shakira returns to her rock and pop roots from earlier in her career, but for now, I will have to settle for reggaeton collaborations. If she’s going to be putting out catchy songs and sampling one of my favorite songs from the 90’s (Inner Circle – “Sweat (A La La Long”), I guess I can wait a little longer.

My Quarantine Queen in a song with two Reggaeton heavyweights, what else can I ask for? Just pure delight.

Are there any two words more representative of Latin culture? The answer is no and the result is a great song to listen to while drinking several Aguila beers by the beach in Cartagena.

A big shout out to the Black Eyed Peas (sans Fergie) for delivering a full album inspired by Latin music. Though for most of it, it feels as if they are just exploiting the contemporary Latin pop trend, there are some standouts in the album; “Girl Like Me” is one of them. This song gets extra points for the video in which Shakira is dancing in an 80’s inspired gym attire and the hand choreography is totally on point.

An overall great Top 100 hit that is made better with Rosalia’s strong vocals and seductive Spanish lyrics.

Posted by Aaron Bergstrom at 1:07 AM